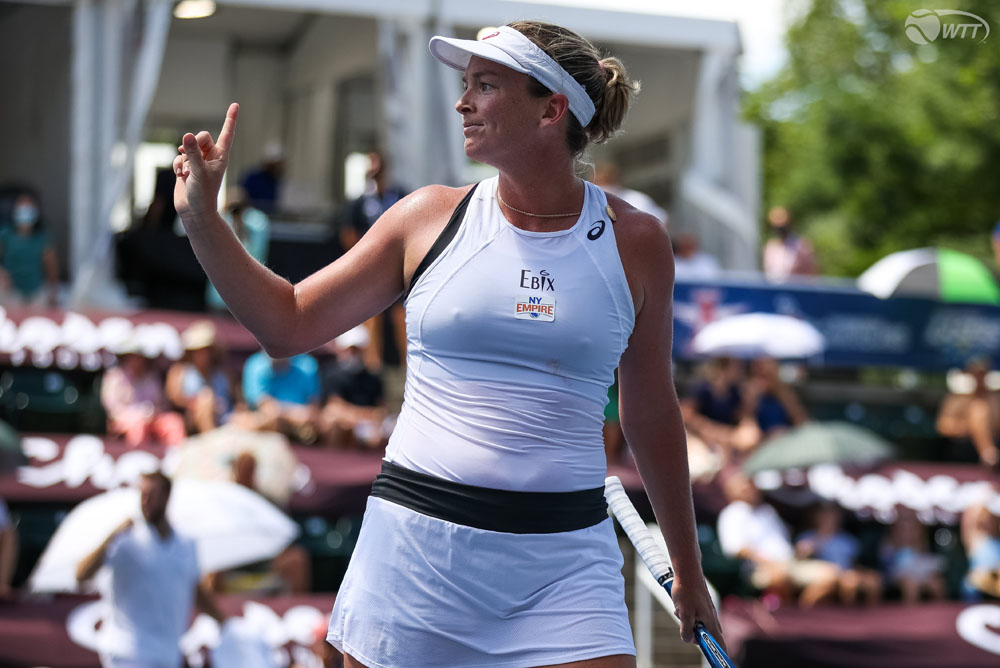 Though she hit the shot that took it all for the New York Empire in the 2020 World TeamTennis season, Coco Vandeweghe is coming home for a fifth season with the Aviators in 2021. The 29-year-old veteran will join her fellow teammates with San Diego ties, Taylor Fritz and Brandon Nakashima, when the season begins on November 13 at the Indian Wells Tennis Garden in the Southern California desert. It might not be the home stadium she’s used to playing for her Aviators fans, but the sunny location is still close enough to call home turf, according to Vandeweghe.

“I will miss playing in San Diego at La Costa but luckily for Taylor, Brandon, and myself, Indian Wells isn’t too far away, so hopefully we can get a lot of family and friends out supporting us while we compete this year,” says the Rancho Santa Fe, California resident. “There is nothing better than playing in front of family and friends, so I expect all of my supports to come out and get loud!”

This won’t be Vandeweghe’s first experience playing away from Carlsbad’s Omni La Costa Resort & Spa, the Aviators’ home for five years from 2015 until 2019. The league made the move to play all matches in one location in 2020 due to the pandemic at West Virginia’s historic Greenbrier resort. Despite the transition from the traditional season of cross-country travel for away matches to a single, shared location for all teams as a precaution for player and spectator safety, Vandeweghe embraced the experience. “Looking back at the Greenbrier brings back so many fun memories,” she says. “It was really like a summer tennis camp for professional tennis players. I think for WTT, playing in one location has a tournament feel, which I think is better for all the players.”

The venue adjustment also clearly didn’t impact her level of play. After being traded to the New York Empire to play out the post season, Vandeweghe proved herself indispensable, hitting a thrilling, back-of-the-line winner in the supertiebreaker of the championship match against the Chicago Smash that clinched the King Trophy for the Empire. She was named the Finals MVP. “It was such a great experience to win the last match, and the way we did only made it more special,” she recalls. “I love seeing the replays of it and the reaction of everyone playing. There were so many momentum swings in that match and throughout the whole three weeks there. It was just so special to end the entire season with such a great match from both teams.”

Vandeweghe consistently thrives in WTT’s unique format, activating the crowd’s energy to fuel her performance. “It takes a certain player to play WTT and I’ve always considered myself one of those players,” she says. A 2020 WTT All-Star, Vandeweghe is known for her energetic on-court demeanor — crowd-focused and engaging spectators to cheer their support in pressure moments during a match. “If you are a serious player who doesn’t like crowd interaction, then WTT probably isn’t for you,” she says, “but I don’t consider myself a player like that, and if someone described me like that I would be offended!”

That fan support is surely welcome as Vandeweghe works her way back up the rankings after injuries and the COVID pause have taken their toll on the former World No. 9. “Seeing my current ranking gives me more motivation because I know in my head that I am a better player than my ranking,” she says. “Coming back from more than one injury, which is what I have had to do, plus COVID hitting the world, has made everything so challenging. But, I’m very grateful to be healthy now, playing tournaments that I’ve missed the last few years. I know the comeback trail takes time but it’ll all be worth it soon when hopefully my ranking is back up to what I expect it to be.” For Vandeweghe, a Fed Cup champion, Olympian, and Grand Slam doubles winner, those expectations are surely high.

Her long absence from the tour also provided new perspective on the demands of life as a professional tennis player. “I think I got very used to staying at home with my injuries and COVID,” she admits. “Traveling again has taken some time to get used to, especially with the tournaments all over the world having different guidelines based on the country and COVID rules. There are times that I miss home and then there are times where I’m on the road in a city that I love that makes me appreciate the grind of the tennis tour.”

As the season speeds toward the U.S. Open —the final major of the year — later this month, Vandeweghe weighs in on the significance of WTT’s move to not just a new venue, but a new place on the calendar. “The tennis calendar is always crowded and the summertime, which is when WTT was historically always played, is one of the more crowded spaces,” she says. “For American players like myself, the U.S. summer hard court swing is the most important swing of the year. Playing WTT was always a great way to prepare for the U.S. Open because it got you in match shape, but the traveling at times could be tiring on your body. There was always a balance that I had to find when deciding how many matches I could play during the July season. I think moving to November is a great idea because it gives players more flexibility and we don’t have to sacrifice playing WTA events or WTT.”

She sums up the changes that distinguish the 2021 WTT season with the signature enthusiasm that’s made her a WTT star since her debut in the league 12 years ago at the age of just 17: “This November is going to be awesome, and I can’t think of a better place than the Indian Wells Tennis Garden.”