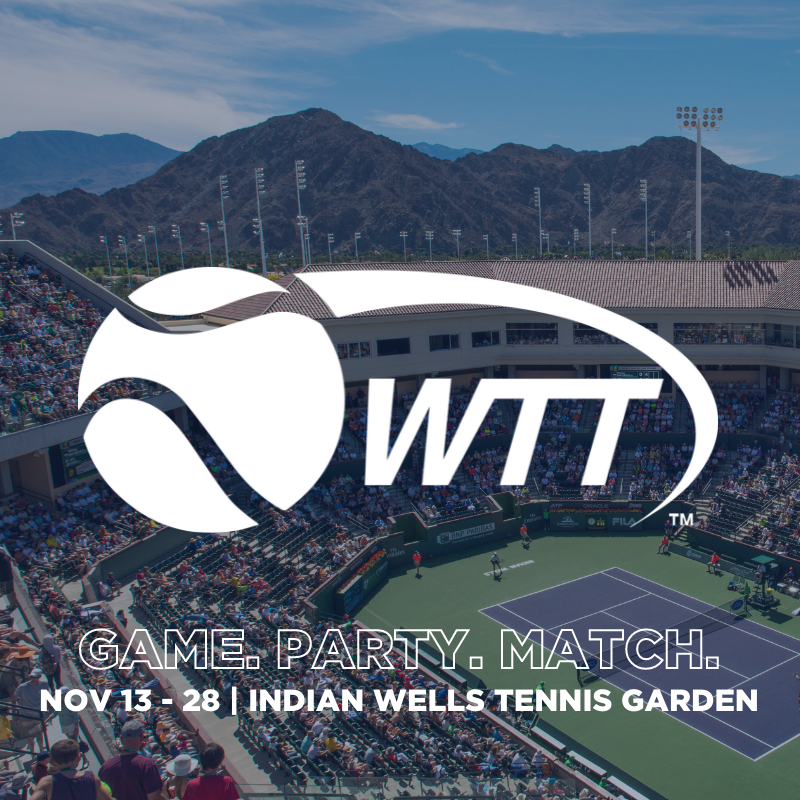 With the 2021 World TeamTennis season just four months away, fans can now officially mark their calendars. World TeamTennis announced its schedule for the 2021 season, with matches starting on Nov. 13 and the championship match taking place on Nov. 28.

Special pre-sale access for single session tickets will be given to previous WTT ticket buyers starting today, with the tickets going on sale to the general public starting July 16. Season ticket packages and weekend ticket packages are also on sale now. Fans are encouraged to visit wtt.com for all of their ticketing needs.

The full season schedule can be found here.

The announcement of the 2021 schedule and single match tickets comes as more players commit to play WTT in 2021. Americans Coco Vandeweghe, Mackenzie (Mackie) McDonald and Frances Tiafoe join Canadian Genie Bouchard in the latest addition of the 2021 player field.

“To have a schedule in place and tickets on sale for this season certainly serves notice of just how soon we will be taking the court in November,” said WTT Chairman and CEO Eric Davidson. “We are excited to continue to add players to our rosters for the 2021 season and we look forward to welcoming our fans and players alike to Indian Wells.”

“After ending last season on such a high note, I can’t wait to return to World TeamTennis,” Vandeweghe said. “It will be great to be a part of this season at Indian Wells, an incredible venue with a tremendous fan base. We’re putting together a good team and I’d love to be back in the championship match again this year.”

Bouchard, who enters her sixth WTT season, teams up with Jennifer Brady and John Isner on the Orange County Breakers, competing for the Breakers for the second time in the last three years. Being named WTA Newcomer of the Year in 2013, Bouchard is a two-time Major semifinalist and collected the WTA Most Improved Player award for the 2014 season. Bouchard was the first Canadian-born player to reach the championship match in a Grand Slam tournament, finishing as the runner-up at Wimbledon in 2014.

McDonald will be making his first WTT appearance since 2018, joining Jessica Pegula on the Springfield Lasers, winners of back-to-back titles in 2018-19. As a professional, McDonald reached the fourth round at Wimbledon in 2018 and in the 2021 Australian Open in addition to being a semifinalist in the 2018 Delray Beach Open. The Piedmont, California, native was a three-time Singles All-American at UCLA, earning the 2016 ITA National Men’s College Player of the Year and collected both the singles and doubles NCAA National Championships in that same year.

Tiafoe pairs with Sloane Stephens, the 2017 U.S. Open champion, on the Chicago Smash while making his fourth World TeamTennis appearance. In 2018, Tiafoe became the youngest American man to win a title on the ATP Tour since Andy Roddick in 2002, claiming the singles title in Delray Beach. Tiafoe is coming off his sixth ATP Challenger Tour victory, having won seven of his last eight finals on both the ATP Tour and Challenger circuit.

“It’s going to be great to team up with Sloane on the Smash,” Tiafoe said. “World TeamTennis is super competitive and a lot of fun for us to play. To have the entire season at a place like Indian Wells will be really special.”

These players join the previously announced commitments of Kim Clijsters and Jack Sock, who are a part of the defending champion New York Empire. Clijsters has won six Grand Slam tournament titles while Sock has three Grand Slam doubles titles to go with two Olympic medals.

First serve is set for 3 p.m. PST, on Nov. 13, where the Chicago Smash will take on the San Diego Aviators. Due to requirements set by the Indian Wells Tennis Garden, all fans in attendance will need valid proof of full vaccination to enter the grounds for WTT matches.