WTT Men Go Undefeated During Day 1 of the US Open 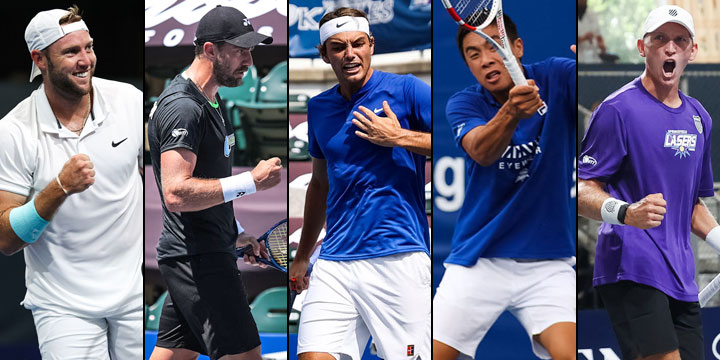 The US Open got underway on Monday at the Billie Jean King National Tennis Center in Flushing, New York. The World TeamTennis men were undefeated on the first day of play, among those who played the recent full season at the Greenbrier.

Chicago Smash’s Brandon Nakashima started the day by defeating Paolo Lorenzi of Italy in his first Grand Slam appearance. Nakashima rolled in straight sets winning 6-3, 6-2, 7-6(3) without dropping his serve and converting on 75 percent of his break chances. Nakashima is coming off a breakout season with the Smash and was a major reason for Chicago’s run to the WTT Final. Nakashima will face off against the No. 5th seed Alexander Zverev.

Springfield Lasers’ Mitchell Krueger earned his first career victory in a Grand Slam by taking down Pedro Sousa of Portugal in four sets. Krueger dropped 11 aces during the match, broke Sousa’s serve six times, and also won 41 percent of his return points. Krueger is continuing the success he demonstrated during the WTT season where he compiled victories against fellow Americans Tommy Paul, Jack Sock and Brandon Nakashima. He will meet 20th-seeded Pablo Carreno Busta of Spain in the second round.

New York Empire’s Jack Sock was victorious in a thrilling five-set match on Court 12. Sock, who is coming off of a King Trophy win and being named the WTT Finals Male MVP, faced off against Pablo Cuevas of Argentina and was looking to avenge his 2019 US Open first-round loss to Cuevas. After splitting the first four sets, the players reached 4-all in the fifth before Cuevas earned the first break of the set, giving him the chance to serve for the match. After a double fault and a few unforced errors from Cuevas, Sock was able to break back for 5-all and both players held to force a tiebreak. Sock dominated the tiebreaker from the beginning, winning 7-2. This is the first Grand Slam victory in singles for Sock since the 2018 US Open. The American will carry this momentum into his next round when he plays 32nd seed Adrian Mannarino of France.

Our #WTT2020 Championship Male MVP @JackSock makes it through! The @nyempiretennis star ⭐️ takes it in a fifth set tiebreaker and will face Adrian Mannarino in R2! #USOpen https://t.co/CZJorcrYpD

Philadelphia Freedom’s Taylor Fritz (19) pulled out a tight four setter against Dominik Koepfer of Germany. Koepfer was trying to replicate the success he had at last year’s US Open where he made an incredible run to the 4th round, defeating Reilly Opelka in the process. The match started with a grueling set tiebreak that saw Koepfer take it 9-7. Fritz regrouped, only dropping serve once, and cruised to victories of 6-3, 6-2, 6-4 in the next three sets. Fritz, who led the Freedoms to the best overall record during the season and was awarded the season MVP, was dominant on his first serve winning 83% of those points. The 19th seed  also dominated in the winner’s category earning 42 to Koepfer’s 23. Fritz will play Gilles Simon of France in the next round.

Orange County Breaker’s Steve Johnson faced off against 16th seed and highest-ranked American John Isner in Round 1. Going into the match, Johnson held a 5-4 record against Isner and was 5-2 on hard court against him. In a match that lasted nearly four hours, Johnson went the distance and came out on top 7-6(7-3) in the final set. Throughout the entire match, Johnson never dropped his serve and was able to break the powerful Isner serve twice. Isner aced Johnson 52 times but in the process had 46 unforced errors compared to Johnson’s 23. Johnson advances to the 2nd round where he will play Ricardas Berankis of Lithuania.