New York Wins a Match for the Ages, Defeats Chicago 21-20 in Supertiebreaker 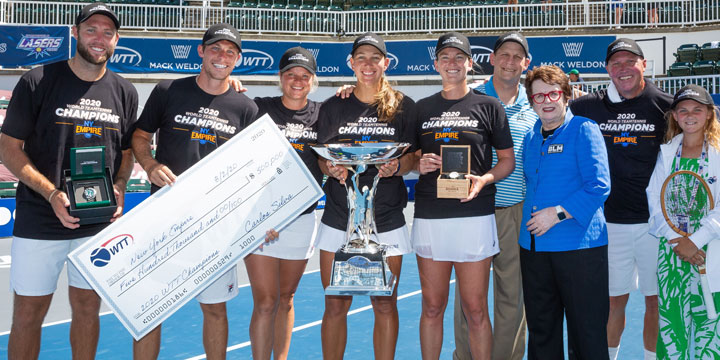 The 2020 World TeamTennis season came down to a 13-point Supertiebreaker. And for a league that promotes “every point matters,” all 13 points were necessary.

The New York Empire outlasted the expansion Chicago Smash to claim a 21-20 victory to cap the 45th WTT season and hoist the King Trophy for the first time.

“To see the best players going after it, toe-to-toe, it’s wonderful,” said Empire coach Luke Jensen, whose squad finished runner-up in 2019. “Last year, we were one swing away, and this time the swing went in. We’re very fortunate to be in this position.”

New York’s men’s doubles team of Jack Sock and Neal Skupski was aggressive from the jump. While Chicago took the first point, including an opening-serve ace from Brandon Nakashima, the Empire duo reeled off three consecutive points. The Smash’s Rajeev Ram struggled with first-serve attempts, and New York was able to break for a 2-1 lead followed by a love-service by Skupski.

Nakashima brought Chicago within 3-2 before Sock posted a love-service. Facing set point, Ram – the 2020 Australian Open men’s doubles champion with Joe Salisbury – had a double fault to end the 5-2 set.

In mixed doubles, Sock subbed in for Skupski to pair with CoCo Vandeweghe to face Ram and Bethanie Mattek-Sands, the WTT’s 2020 Female MVP. The Empire acquired Vandeweghe and Nicole Melichar from San Diego at the trade deadline, and the Sock-Vandeweghe duo meshed quickly and was 3-0 entering Sunday.

The teams held serve through eight points – including an ace from Ram to cap a love-service to knot the set at 3-3 – to force a 9-point tiebreaker. After New York capitalized on its serves for a 4-2 advantage, Chicago pulled within 4-3 before the Empire called a GEICO Timeout. After the break, Sock nailed the winner to cap the game to push New York’s lead to 10-6.

Sock and Nakashima, playing on the eve of his 19th birthday, squared off for the third time this season in the men’s singles matchup. Twenty minutes later, Nakashima had broken Sock’s serve twice to take a 4-0 lead and deadlock it at 10.

Nakashima went ahead 2-0 by keeping Sock on the baseline and then dropping in the winning volley. The youngest male player in the WTT delivered an ace for a 3-0 lead. He capped the four-point run by forcing a deciding point then continued to dominate with the forehand to break Sock.

Looking for his first 5-love sweep of the season, Nakashima finished off Sock as Chicago took an 11-10 lead, its first advantage since 1-0.

“It’s been a blast. With CoCo, we put together some great matches, some great sets. You’re playing for your team, playing your heart out,” said Sock, who was the men’s MVP. “I thought I hurt us there for a bit today, so I’m glad the girls picked us up there at the end and were able to close it out for an incredible comeback.”

With Kim Clijsters still sidelined with an abdominal injury, Vandeweghe returned to the court to face Sloane Stephens in women’s singles.

Vandeweghe held serve for the first point to tie the match. Stephens, the 2017 U.S. Open champion, then reeled off three consecutive points and broke Vandeweghe en route to a 14-11 lead.

However, the feisty Vandeweghe managed to hold serve to earn two of the next three points. In the eighth game, Stephens’ march would not be denied as she capped a 5-3 game for a 16-13 Smash lead.

With the King Trophy on the line, Chicago’s women’s doubles Mattek-Sands and Genie Bouchard faced Vandeweghe and Melichar, who won a previous matchup, 5-1, when they were with the Aviators.

“We had great chemistry from the word go, Nicole and I,” noted Female MVP Vandeweghe. “She picked me up when I was down, and I did the same with her. We kept our momentum going in the playoffs and kept fighting for it.”

Bouchard held the opening serve to push the Smash advantage to 17-13. New York also held serve, taking the deciding point to tie the set at 1-1. With Mattek-Sands serving at the deciding point, Bouchard dropped in a winning return off a rocket from Vandeweghe to hold. Melichar followed with a love-service to keep alive the Empire’s hope of Extended Play.

Tied at 2-2, Bouchard served at another deciding point and capitalized to put the Smash up 19-15 overall. Vandeweghe answered, and the Empire broke Mattek-Sands’ serve – it’s first in eight break points attempts – to lurch ahead 4-3 and pull within 19-17. Melichar double-faulted at 40-love, and the Smash rallied with three consecutive points to force match point. Bouchard delivered the return winner for a set tiebreaker.

In the 9-point tie break, New York took four of the first five points – one off a double fault by Bouchard – then Chicago rallied to knot the game at 4-4. Melichar served a winner for the set tie break to force Extended Play at 20-18.

The Empire held serve with Vandeweghe, 20-19, and needed to break Mattek-Sands for Extended Play. New York did – and the championship came down to a 13-point Supertiebreaker.

The chase to seven points began with Chicago subbing in Stephens for Bouchard. New York went ahead 2-0 behind Vandeweghe. Stephens served as the Smash evened the score. The Empire split Melichar’s serves, and then Mattek-Sands pushed Chicago ahead 5-3.

Vandeweghe-Melichar managed to knot the score at 5-all. It came down to three serves by Stephens. New York eased ahead 6-5, and Stephens aced her next serve to set up a season-ending point. Knotted at 6, Stephens lofted the ball skyward and served to Vandeweghe, whose return was ruled in at the backline – and the Empire celebrated their first WTT championship with a $500,000 winners’ check.

“It was so much fun to have it on my racket to control the situation,” Vandeweghe said. “Luckily, I controlled it in the right way. I’m really pumped. It absolutely accentuated what World TeamTennis is – the team vibe, team energy, people picking up each other when they’re down. I had so much fun out there.”

“I didn’t want to tell CoCo to go line, because I wanted her to feel her instincts, but I felt that Bethanie was going to try to cross, and the second [Vandeweghe] hit it and I didn’t hear an ‘out’ call, I was thrilled,” Melichar said. “But then … the fact [the Smash] were challenging it, all of a sudden, we were like, ‘Oh no, oh no, oh no.’ It was just pure joy after that. It was incredible.”

Added Chicago coach Kamau Murray: “I’m proud of this team for its fight all year. Next year, I think we have a good core, and if we bring most of them back, we’ll be here again.”

The Empire is the 24th franchise to win the WTT championship and the fourth from New York, joining the Apples (1976-77), Sportimes (2005), and Buzz (2008). … The Washington Kastles, coached by Luke Jensen’s brother, Murphy, and the defunct Sacramento Capitals have won a record six league titles.