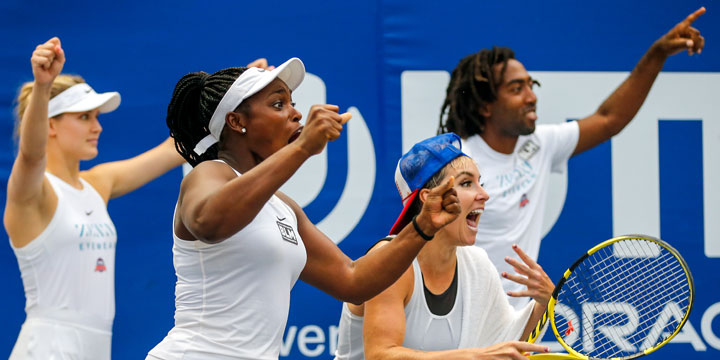 It came to pass on Saturday in the World TeamTennis playoffs: Chicago is an expansion team in name only. The Smash ended No. 2 seed Orlando’s seven-match win streak with a 24-13 semifinal victory to earn a berth in the championship match against the New York Empire.

“I think we had some hiccups this week and had some tough conversations as a team,” coach Kamau Murray noted of the Smash’s three-match losing streak to end the regular season. “The respect level is there among the team, and everybody owned their part of it and regrouped.

“I thought today was a good example of hitting the reset button and take ownership of what happens. … I thought we managed the momentum better than we did the last three matches.”

Playing at Center Court at Creekside at The Greenbrier, Orlando’s juggernaut of Ken Skupski and Tennys Sandgren – the WTT’s top men’s doubles duo – went ahead 1-0 but it was all Smash from that point. Brandon Nakashima held serve before Chicago broke Skupski’s serve, and then Ram lofted a volley up the line to give the Smash a 3-1 lead.

Nakashima drove a forehand winner for the point to break Sandgren’s serve, and then the 18-year-old opened the clinching game with a 123-mph ace. A brief delay for lightning only postponed the inevitable. Ram dropped in a winner at the net for set point, which Nakashima delivered as Skupski’s return was long to seal a 5-1 win for the third-seeded Smash.


#WTT2020: @GuaranteedRate Player of the Match Brandon Nakashima chatted with @NickGismondi after the No. 3 @ChicagoSmashWTT took down the No. 2 @OrlandoStormWTT 24-13 to punch a 🎟️ to the #WTTChampionship! He talks about playing with a team, strategy for the final and more! pic.twitter.com/soPMRAM4CQ

“I really enjoyed it; it’s a lot of fun out there,” Nakashima said. “Playing against Tennys, he’s such a great player, so it was overall a great experience for me.

“It’s been great so far, playing alongside these great people,” he added. “It’s a pleasure to be around them. This season, everyone has played their part in a positive way. I’m just lucky to be part of it.”

Pegula, who entered with a six-match win streak and 8-1 overall in WTT singles, went up 1-0. Stephens responded with a love-service game, then Pegula held service. Stephens also held serve at 2-2, a critical point after falling behind 0-30 and won the deciding point.

Stephens, the WTT’s No. 6 overall women’s singles player, broke Pegula for a 3-games-to-2 lead – but the first year WTT player responded with back-to-back games to cut Orlando’s deficit to 8-5 overall.

The Storm shook up its mixed doubles, swapping out Skupski in favor of pairing Sandgren with Pegula to face 2020 Female MVP Bethanie Mattek-Sands and Rajeev Ram, who won a WTT-best 56% of their games.

“Playing with Bethanie,” Ram said, “it’s so awesome. She’s got a ridiculous resume, and I’ve played against her many times, but we’ve known each other for a long, long time. It’s fun to get on the same side of the court and, I feel like, when we play well, we’re pretty tough to beat.

Chicago won three of the first four points, including breaking Sandgren’s serve in the opening game and Ram putting the exclamation point on a 2-0 lead with a 128-mph serve.

After splitting four points, Pegula served to keep Orlando close, but Mattek-Sands slammed the door at set point for a 5-3 win and 14-9 lead.

“Being the MVP of the league is such a huge honor,” said the 35-year-old Mattek-Sands, who has nine Grand Slam trophies. “I’m here for three weeks so you just go match by match. I was just ready to do what I needed for the team if that required mixed doubles, doubles, singles, bench, energy, whatever it took. It’s an MVP, but it still takes a team.”

Winners of four of their past five sets and 60% of their games, the BMS-Bouchard duo fell behind 2-1 and 3-2. However, the Smash finished off the game by winning three consecutive points to take the set 5-3.

After falling behind 0-40, Jurak served on set point, and Mattek-Sands returned to set up a five-shot volley between Jurak and Bouchard. BMS lofted a return to the back line that nestled in to give Chicago a 19-12 advantage.

“The chemistry, that’s something I talk about when I play doubles. As long as you can keep the energy, you can pull through a lot of matches.

“Today, we got off to a great start and got ahead, but we’ve been in matches where we’ve been behind, or it’s been close. If we’re keeping the energy the same, we’re bringing it every single point.”

In the men’s singles match, Nakashima jumped out to a quick 4-0 lead with two breaks of Sandgren’s service, including being down 0-30 in the third point.

Sandgren, who won a WTT-high 65 games, averted the shutout by holding serve to pull within 4-1. However, Nakashima – who dropped both matches 5-4 to Sandgren during the regular season – served out for a 5-1 win and a championship match-clinching 24-13 victory for the Smash.

“It feels great to be in the final,” Nakashima said. “I felt a little bit of pressure playing Tennys because I had lost to him already earlier in the season. We had a couple of tough losses at the end but we just said let’s forget about it and focus on the playoffs and that’s what we did.”

Chicago won both matches against New York in the regular season – 22-21 on July 17 and 21-16 on July 25. Two days later, with an eye on making a playoff push, the Empire acquired past Grand Slam doubles winners Coco Vandeweghe and Nicole Melichar from the San Diego Aviators.

“They’re a great team,” Ram said. “I think Beth said it exactly right: In team events, you can affect other people. The best thing I can do in doubles is to make my partner play well. If they play well, my job is easy.

“Top to bottom, every point is going to be everybody’s responsibility – not just the person on the court.”

Nakashima said Sunday would be business as usual for the Smash. “We played them twice in the regular season and did well against them,” Nakashima said. “Not much to change here. Everybody on the team played a great match and hopefully continue that winning streak tomorrow.”

Murray believes the Smash will hold their own against the Empire but noted, “we have a couple of areas where we might be a bit stronger, and those people need to show up. We’ve come this far; there are no excuses now.”

Orlando struggled with its service game. The Storm had six double faults, four off the racket of Sandgren. Overall, Orlando hit on 62% of its first serves, compared to 70% for Chicago.

Chicago faces New York at noon ET Sunday on CBS for the coveted King Trophy – and a $500,000 payout to the winning team. The finalists will split $250,000 as a total of $1-million prize money was added to this year’s playoff teams.