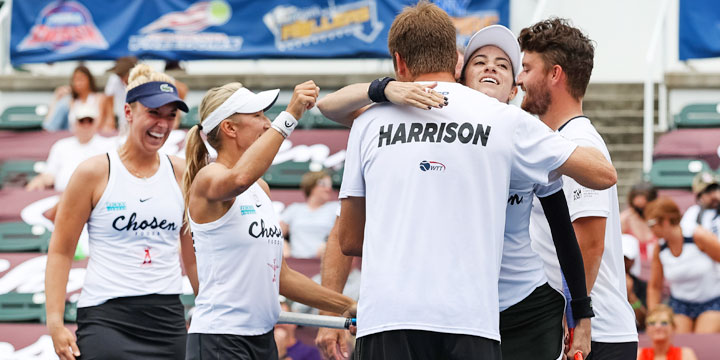 With postseason seeding still to be determined, the expansion Chicago Smash took to Center Court at Creekside at The Greenbrier on Thursday, looking to keep the pressure on Orlando in the chase for the No. 2 spot in the World TeamTennis playoffs.

Playing host to the San Diego Aviators, the Smash sought to wrap the regular season with a win to end a two-match losing streak. While the Aviators bring up the rear of the nine-team league, they refused to merely roll over for Chicago and forced three 9-point tiebreakers and a super tiebreaker in five matches.

For the second consecutive day, Chicago (9-5) dropped the super tiebreaker and lost, 23-22, to secure the third seed in the four-team playoff. The Aviators salvaged a split of the season series, after losing, 20-16, on July 20.

With the morning sun casting shadows across the court, men’s doubles – Jonny O’Mara and Ryan Harrison vs. Rajeev Ram and Brandon Nakashima – ended with a 9-point tiebreaker. Chicago took the first game before the Aviators sprinted to a 3-1 advantage. Ram’s love-service brought the Smash within 4-3 before a break to knot the game at 4.

San Diego had 2-1 and 4-3 leads in the tiebreak before Chicago took the match 5-4 after O’Mara double-faulted on back-to-back services.

Nakashima and Harrison remained on the court for men’s singles. Facing an 0-2 hole, Nakashima rallied to tie before falling behind 4-2. However, the 18-year-old broke Harrison’s serve to force a 9-point tiebreaker.

#WTT2020: @ChristinaMcHale and Kveta Peschke win two in a row in Extended Play to send this match to a Supertiebreaker! The @SDAviators and @ChicagoSmashWTT are all tied up at 22-22.

Tied at 1 point apiece, Harrison took four of the next five for the win and knot the match at 9-9.

“There have been a lot of close losses so this one feels good to get,” Harrison said. “It gives us confidence going into the offseason so we can come back next year and pick up where we left off. It’s always good to end the year with a win.”

A 9-point tiebreaker also decided the mixed doubles match. Chicago took a 3-0 lead before the Aviators drew within 4-3. With Bethanie Mattek-Sands serving, the Smash was up 0-40 only to see San Diego scratch back to force the tiebreaker when Lisicki drove a winner up the line.

Chicago took a 3-1 lead on the strength of a BMS rocket return on a serve and Ram capitalizing on a volley return down the line. With Lisicki serving set point, Mattek-Sands sealed the match with an overhand smash to give Chicago a 14-13 advantage.

Sloane Stephens and Christina McHale were matched up in women’s singles, and the 2017 U.S. Open champion bookended a 5-2 win by breaking the Aviator’s serve. In the opening game, Stephens posted four consecutive points followed by a love-service for a 2-0 lead.

McHale cut the deficit to 3-2. In the seventh game, Stephens fell behind 0-30 before Smash coach Kamau Murray called a GEICO timeout. The T.O. spurred the 27-year-old to break McHale’s serve again to take the match 5-2 and push Chicago to a 19-15 lead.

McHale and Kveta Peschke looked to force extended play against Mattek-Sands and Genie Bouchard in women’s doubles. Tied at 1-1, Peschke’s double fault buoyed the Smash duo to a 3-1 advantage as the Aviators earned a break at 3-all.

The Aviators (4-10) capped a four-game run to earn extended play at 5-3. In EP, McHale pulled the Aviators within a point before breaking Bouchard’s serve to set up a super tiebreak at 22-all.

In the 13-point super tiebreak, the sixth of the WTT season, the race to seven points began with BMS serves to earn two points. McHale evened the game at 2-2, then Bouchard held serve for a 4-2 advantage. Peschke continued the tit-for-tat at 4-4.

Mattek-Sands’ serve ended at 5-5 to set up McHale for the final three serves. The Aviators lurched ahead 6-5. At match point, Peschke dropped in the winner for a 23-22 victory to end San Diego’s seven-match losing streak.


Duane Cross is in his first season covering the WTT and Chicago Smash, and his 31st as a sportswriter.