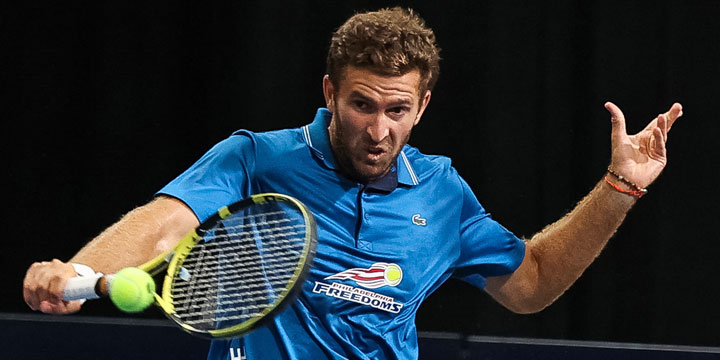 With 63 matches over 19 days in the books for the 45th season of World TeamTennis it was only fitting to see the Philadelphia Freedoms and New York Empire close out the regular season in what many thought would be a playoff preview.

Dating back to the end of last season the Empire has been the kryptonite for the Freedoms dealing Philadelphia three consecutive losses with the latest defeat coming at the beginning of this season.

Early on it looked as though Philadelphia would snap their three-match losing streak to New York jumping out to an early 9-1 overall lead. However, the Empire refused to go away and quickly crawled back to within 14-9 by halftime. The early Philadelphia lead was too much to overcome and the Freedoms would earn the 23-17 win and finish the regular season 12-2.

“We are definitely happy to get the win,” said Philadelphia’s Fabrice Martin following the match. “We know the playoff brackets are out and we play New York so it’s always good to get the win and gain some confidence.”


#WTT2020: @GuaranteedRate Player of the Match @FabMartin86 chatted with @NickGismondi after a 23-17 win over @nyempiretennis, who they will face in #WTTPlayoffs this Saturday. He talks about how open the team is, tactics for this weekend (watch on @CBS!) and more! pic.twitter.com/bLkzGKYeMu

“We got a lot of information from the match,” said Philadelphia coach Craig Kardon. ”We played them before but you never know what team they’re going to put out there, but we know our team and we’re comfortable with our players, and we’re really looking forward to the challenge on Saturday.”

With each team winning two sets and Philadelphia holding a slim 18-14 lead, the final regular-season match would come down to the final discipline – men’s doubles.

Blanch would serve first for the Empire and his first serve would catch the ear of teammate Neal Skupski and send his partner down for the cont. Fortunately, Skupski would get up and be able to remain on the court and his team would go on to win that opening game and slice Philadelphia’s lead to 18-15.

New York tried a lob, but Martin’s reach was too much and Martin was able to put the overhead away to secure the victory.

It appeared as though Philadelphia would cruise to victory tonight on the final night of the regular season as Taylor Fritz opened with a 5-1 win in men’s singles over Ulises Blanch, who subbed in for Jack Sock (out with a minor lower back strain according to coach Luke Jensen) before Sofia Kenin jumped out to a 4-0 lead over newly acquired Coco Vandeweghe in women’s singles.

With the changeover in each discipline coming after four games, Vandeweghe used the break as a reset and came back winning the next four games to level the set and force the first two tiebreaks on the night. In the breaker, Vandeweghe won the first two points en route to the 5-1 win in the breaker to win the set 5-4 and bring New York back within 9-6.

New York would win the opening game of the mixed doubles event to claw within 9-7 but that would be the closest they would get as the Philadelphia duo of Martin ad Taylor Townsend would break newly acquired Nicole Melichar to take a 2-1 lead before consolidating the break with a service hold by Townsend to take a 3-1 lead in the set en route to the 5-3 win and a 14-9 lead at halftime.

“We really have built our franchise the last couple of years around their model – strong, intelligent, forceful, talented women who can play all disciplines,” said Empire coach Luke Jensen. “We competed extremely well. We didn’t roll over…We’re going to bring our energy. We’re going to bring our enthusiasm and then the game follows that. I really think they played extremely well tonight, but we just kept clawing the whole time and that’s going to rebound us to the next match.”

New York would win 4 of the 6 deciding points in the match. Philadelphia finished the regular season with a league best 12-2 mark.