Orlando Storm Locks Up No. 2 Seed, Takes Out Washington to Close Out Regular Season 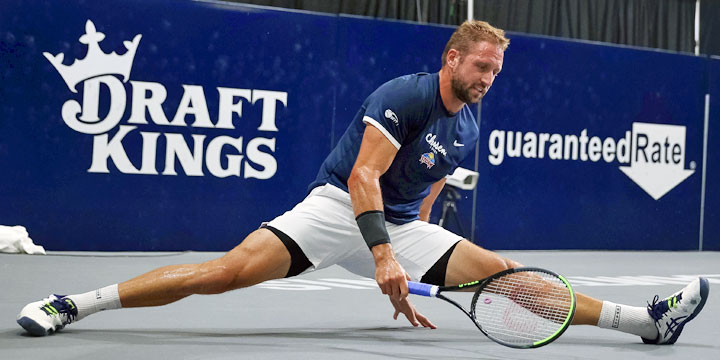 The Orlando Storm are certainly ready for the World TeamTennis playoffs. Thursday’s regular-season finale left no doubt about that.

The Storm (10-4) cruised past the Washington Kastles, 25-15, to secure their seventh consecutive victory as well as the No. 2 seed in the WTT postseason. They will take on the No. 3 seed Chicago Smash in a semifinal Saturday.

WASHINGTON KASTLES vs ORLANDO STORM MATCH STATS
“Seven in a row now, we’re playing really well,” Tennys Sandgren said. ”I think everybody is meshing well and the team is enjoying playing with each other and for each other. Our girls are playing phenomenal. We’ve got James Ward on the bench bringing on the hype. Yeah, things are going really well for us.”

Orlando was rarely challenged in what turned out to be their second match sweep of the season. It took until the fourth set — women’s doubles — for the Kastles to break the Storm’s serve. Orlando had faced only four break points up until then.

The team of Jessica Pegula and Darija Jurak quickly snuffed out any momentum that break might have given the Kastles by breaking back immediately thanks to a couple of winners from Jurak to gain a 2-1 lead in the set. Washington had two more chances to break in the next game, but on both points, Pegula stepped in front of a Venus Williams backhand toward the center of the court, and Williams’ partner, Bernarda Pera, was unable to return either volley.

A similar scene would conclude the set a few games later. After Jurak returned five consecutive shots following her serve at 40-30 and 4-3, Pegula once again shuffled over at the net, picked off a Williams backhand and dropped it between her two opponents.

That set point also gave Orlando its 20th game of the match, thereby cementing its future as WTT’s No. 2 seed even with a loss to Washington. But the Storm and Sandgren didn’t let up in what was an essentially meaningless men’s singles set. He closed out the match by taking care of Tommy Paul in just 22 minutes, 5-2.

Sandgren and Ken Skupski started the afternoon with a 5-3 victory in men’s doubles against Marcelo Arevalo and Nick Monroe. Orlando has a success rate of 54.5% in men’s doubles games this season, second-best in the league.

“I think we complement each other pretty well,” Sandgren said of his doubles teammate. “I’ve got the big serve and Ken is cleaning up at the net. Occasionally, I can scrap some volleys in there on his serve, but we’ve both been returning well and vibing well on the court and that has translated into some good matches.”

Pegula claimed yet another singles set in convincing fashion, getting by Williams, 5-3. Pegula is now 8-1 in singles action and has won her last six sets. She has also won 71.4% of the games in those six sets.

She followed that up with a 5-4 (0) triumph alongside Skupski in mixed doubles versus Pera and Arevalo.

The Kastles (6-8) end their season in fifth place.

— A few days ago, Sandgren was asked what is the key to future success for the Storm. He declared directly: “Let Jess (Pegula) carry us!”

Pegula has done just that during this winning streak. She has won at least two of her three sets in each match and has been victorious in 58.8% of her games and 76.2% of sets played.

— That break in women’s doubles was Washington’s only one of the match. The Kastles were just 1 for 7 on break points. The Storm, however, weren’t much better at 5 for 19.

— With that 5-3 victory to begin Thursday’s match, Skupski improved his league-best winning percentage in men’s doubles to 56.7% He has won 29.5 of his 52 games played.

The Storm and the Smash will face off in the second of two WTT semifinal matches on Saturday. First ball is scheduled for 5 p.m. on CBS Sports Network. The combatants evenly split their two matches and 80 games against one another this season. The Storm came out on top in the initial meeting, 21-16, back on July 14. Five days later, Chicago scored a measure of revenge, 24-19. Men’s singles was the one set where Orlando prevailed in both matches as Sandgren twice defeated Brandon Nakashima by the score of 5-4.