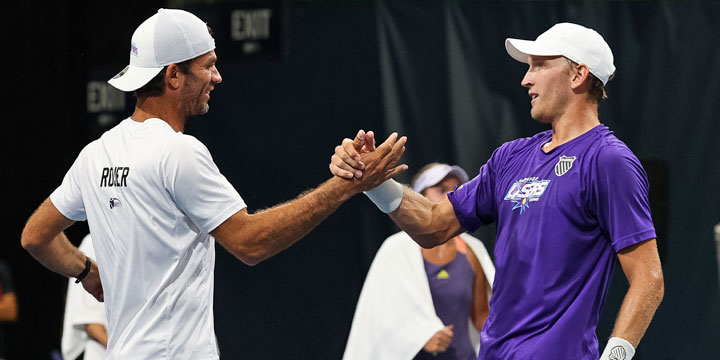 There will be a new champion in World TeamTennis for the first time in four years, with the two-time defending champion Springfield Lasers and 2004/2017 champion Orange County Breakers failing to advance to the playoffs this season.

Both teams were already eliminated from playoff contention heading into the match, but players still had a great opportunity to close out the season on a high note and maximize their preparations ahead of the pro tour resuming soon.

SPRINGFIELD LASERS vs. ORANGE COUNTY MATCH STATS
Men’s doubles, a great platform at the pro level that showcases the success of many former collegiate players, featured a few former college standouts like many other instances this season.

Former grand-slam champions Jean-Julien Rojer of UCLA and Robert Lindstedt of Pepperdine faced 2011 NCAA Doubles champion Austin Krajicek of Texas A&M and Brit Luke Bambridge. Krajicek and Bambridge’s stellar serving proved to be the difference, as the American-British duo remarkably won all 18 of their first serve points to earn a 5-3 win in the tiebreaker over the veteran Lasers team.

Springfield came back fighting to take the lead in the next set, as Olga Govortsova and Caty McNally defeated 2017 WTT Female MVP Andreja Klepac and two-time grand slam champion Gaby Dabrowski 5-2. The Belarusian Govortsova was inserted at 2-1 in the set by Lasers coach John-Laffnie de Jager to replace former University of North Carolina standout Hayley Carter.

Springfield continued their momentum with the experienced Lindstedt joining forces with the rising 18-year-old star McNally to defeat Johnson and Brady 5-3, as the Lasers tandem saved both break points they faced in the set against the Pac-12 duo.

After starting out a bit shaky at The Greenbrier, Jennifer Brady has stepped up her level immensely the last couple of weeks and her second WTT season was culminated by a dominant 5-2 win over Govortsova to bring the Breakers right back into the match.

Trailing 16-15 heading into the fifth and final set for a second consecutive match, it came down to Johnson to pull off the comeback in men’s singles.
Mitchell Krueger had other ideas however, as the 26-year-old from Texas earned his second tiebreak win over Johnson in five days to seal the 21-19 victory for Springfield in their regular-season finale.

Springfield converted their break point chances at a much higher clip, breaking serve three times out of their six opportunities. Orange County on the other hand capitalized on just 2 of their 11 chances in the match, with both breaks coming from Brady in singles.