Vandeweghe Pushes Empire Past Breakers in Pursuit of Playoff Berth 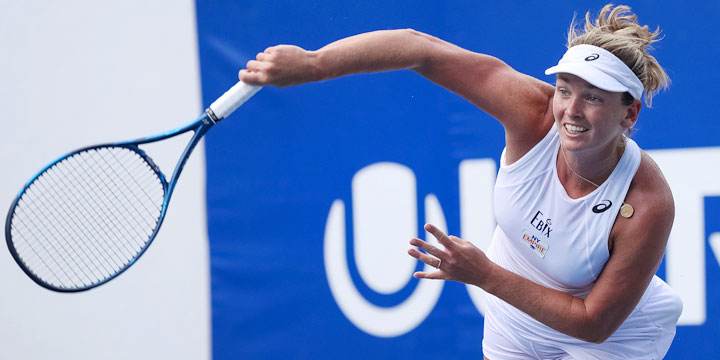 Empire coach Luke Jensen pulled off a blockbuster acquisition right before the trade deadline on Sunday evening, scooping up grand-slam champions CoCo Vandeweghe and Nicole Melichar from the San Diego Aviators in exchange for Sabine Lisicki and Kveta Peschke, as well as financial considerations.

ORANGE COUNTY BREAKERS vs. NEW YORK EMPIRE MATCH STATS
Vandeweghe made an impact across the board today, competing in three sets and winning 13 crucial games for her new squad.

Partnered up with fellow 2018 US Open doubles champion Jack Sock, Vandeweghe and the big-serving right-hander from Kansas defeated Steve Johnson and Jennifer Brady 5-3 to give New York an early lead.

Building a quick 3-1 lead in the next set, Vandeweghe looked to be continuing her momentum in singles against Brady before she faced some difficulties that forced Jensen to sub in Melichar in the middle of the sixth game. The former UCLA standout capitalized on the change of opponent and won 10 of 12 points over Melichar to secure a 5-3 win.

Johnson and Sock looked to play aggressive in singles with their serve and forehand as usual, but it was Johnson in this particular matchup who was able to utilize his knifing backhand slice to put Sock into uncomfortable positions on court leading to errors. This combo led to an early break in the third game of the set and Johnson eventually prevailed 5-3 to give Orange County a 13-11 lead heading into halftime.

On-site alternate Hailey Baptiste was called into action and was ready on court with her racquet to compete in women’s doubles, however Vandeweghe was able to persevere through her earlier troubles to return to play.

The former Aviators duo of Melichar and Vandeweghe demonstrated exactly why Jensen snatched them up for a late-season playoff push, with the duo beating Brady and world number seven Gaby Dabrowski 5-2 to give the Empire the slight 16-15 advantage heading into men’s doubles.

The New York tandem of Sock and Neal Skupski competed in a straightforward set with Orange County’s Johnson and Austin Krajicek, as neither team had any break point opportunities through eight games which forced a tiebreak.

Fortunately for the East Coast team, Sock and Skupski played flawlessly in the tiebreak and won 5-0 to clinch the Empire’s seventh win of the season.

“I claim both coasts as I was born in New York and of course grew up in Southern California,” Vandeweghe said. “My Uncle Kiki (former New York Knicks player and current NBA front-office executive) sent out a mass email down in his bubble in Orlando saying, ‘Coco’s playing for New York now!”

Orange County won three of four deciding points in the match and each team called five Geico timeouts as every single point was crucial throughout the back and forth tilt.