Philadelphia Locks Up No. 1 Seed in WTT Playoffs; Beats Chicago in Supertiebreaker Thriller 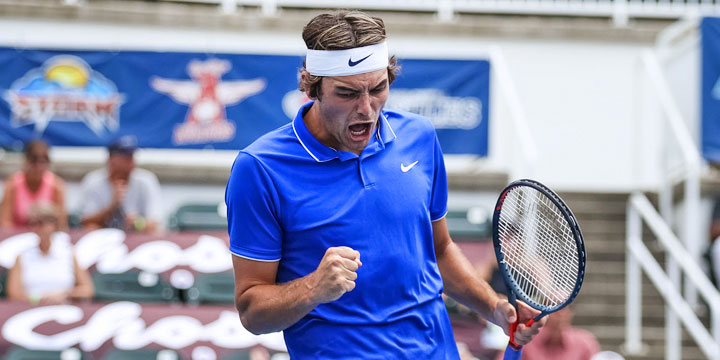 Taylor Fritz told coach Craig Kardon how much he likes playing the closer. With Philadelphia designated as the home team against the Chicago Smash, coach Craig Kardon did not have much to think about when deciding the men’s singles disciplined would be slotted.

CHICAGO SMASH vs PHILADELPHIA FREEDOMS MATCH STATS
Just like he did the other night against San Diego, Fritz once again delivered lifting his team to 22-21 victory in a match that was decided in a Supertiebreaker. The win clinches the number one seed for the Freedoms for the third consecutive season.

“Clinching the No. 1 seed is very important because it allows up to set the order of play in the playoffs,” said Kardon.

Similar to the other night, Fritz took the court with his team trailing. Thanks to an inspiring effort by Chicago’s Eugenie Bouchard and Bethanie Mattek-Sands who defeated Philadelphia’s Sofia Kenin and Taylor Townsend 5-3 in women’s doubles, the Smash rallied from an early deficit to take a 17-16 lead heading into the final set.

With his team down 20-19 late in the men’s singles set, Fritz put on a dominating service game to take a 4-3 lead and a chance to break Brandon Nakashima and close out the match. Just like he did all set, Nakashima displayed some solid serves combined with a powerful forehand to even the set at 4-4 and force a tiebreak.

In the breaker, Fritz took control early and earned the 5-1 win to win the set 5-4 and even the overall score at 21-21 forcing the super tiebreak.

In the super tiebreak, Nakashima served first and Fritz quickly broke to take a 1-0 lead. Nakashima came right back holding serve. Nakashima seemed to take control going up 6-4 in a race to seven points. With Fritz holding the final three serves, Fritz would get a big break winning the next point on a net cord to climb within 6-5. Fritz would go on to win the next two points to secure the match.

“Going into the fifth set down one I wanted the match,” said Fritz following the match. “This is why I want to play in the final set. Brandon (Nakashima) played well and fought but I was able to pull it out. I barely got it.”

Kardon added, “The super tiebreak is just a longer version of the five out of nine tiebreak. Chicago won toss and elected to serve first betting they would be ahead. It would turn out well for us because Taylor held the final three serves and he played the pressure points very well today.”

The action started with men’s doubles today and it looked as though the combination of Nakashima and Rajeev Ram would take control early. On Philadelphia’s first two service games, both Fritz and Fabrice Martin were facing multiple break points. However, with both players confident in their serve each held serve with the set eventually going to a tiebreak.

In the break, Philadelphia would drop the first point before rallying to win five of the next six points to close out the breaker 5-2 and win the set 5-4.

“Our guys are very confident in their service games and sometimes that cause you to get a little sloppy,” said Kardon. “Even when they are down, they remain confident and they did today coming up with the right serves and switching them up appropriately.”

Kenin would follow the men’s doubles with a 5-3 win in women’s singles over Sloane Stephens to increase Philadelphia’s lead to 10-7 heading into mixed doubles which would be won 5-3 by Chicago’s Mattek-Sands and Ram.

Philadelphia secured the number one seed in the WTTT playoffs for the third consecutive season. In her singles match, Kenin clocked 2,152 feet.

Philadelphia and Chicago both close out the regular season tomorrow. Chicago will play the San Diego Aviators at 9 a.m. ET on the Tennis Channel while Philadelphia will play New York at 7 p.m. ET on CBS Sports Network.