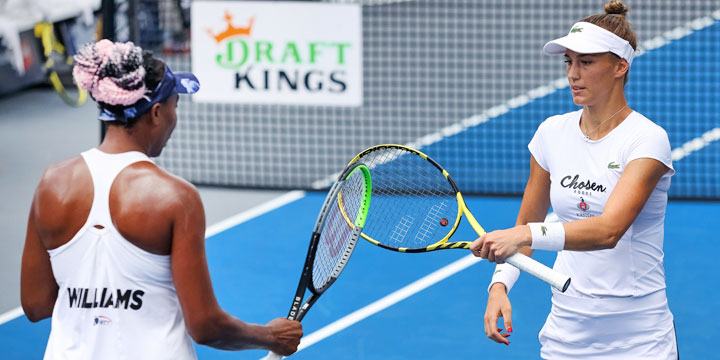 That 24-16 final score doesn’t tell the whole story. There were a lot of nailbiting moments during the Washington Kastles’ win over the Springfield Lasers Tuesday at The Greenbrier.

Dominating performances in men’s doubles and mixed doubles blew open a close match and kept the Kastles’ playoff hopes alive. The loss eliminates Springfield from the playoffs and ends their two-year run of World TeamTennis championships.

“I felt motivated because this was an important match for us,” Washington’s Bernarda Pera said. “We had a lot of motivation on our side.”

It was 14-13 Kastles at halftime before Pera and Venus Williams, playing together for the first time, beat Hayley Carter and Caty McNally, one of the top teams in WTT, 5-2. It was 2-all as the teams switched sides. Williams held serve to nose the Lasers in front and a break of McNally blew the set wide open.

“I was really nervous to play with Venus for the first time, but (coach Robby Ginepri) did a good job preparing me for the match,” Pera said. “He told me to have fun on the court and enjoy the opportunity to play with one of the greatest players ever.”

The momentum from that win carried over into the mixed set. Pera and Marcelo Arevalo broke Robert Lindstedt’s serve in the first game and never looked back. A break of McNally pushed Washington in front 4-0 as the teams switched sides and after Lindstedt earned a hold, Arevalo closed out the dominating 5-1 win.

Washington improves to 6-6 with the win. They’re chasing the New York Empire for the fourth and final playoff spot and have two more matches to play. Springfield falls to 4-9 with one match to play.

Tommy Paul got the better of Mitchell Krueger in an entertaining men’s singles set, 5-4 (5-3) to open the afternoon. The win avenged an earlier loss for Paul against his Laser foe. They traded holds right up to a 9-point tiebreaker, where Paul got a mini-break of Kreuger to put himself in a position to win.

McNally, a WTT rookie, showed off her continued improvement in winning a thrilling women’s singles set 5-4 (5-3) over Bernarda Pera. McNally dropped a 5-2 decision to Pera just 12 days ago. It was a back-and-forth set, with Pera and McNally trading breaks to make it 2-all at the changeover. Pera broke McNally again and surged in front 4-2, but the 18-year-old rookie got her second break of the set to force a tiebreaker.

Men’s doubles followed the early pattern, going to the third 9-point tiebreaker of the day before Arevalo and Nick Monroe escaped with a 5-4 (5-3) win. Arevalo and Nick Monroe led that set 4-2, but a hold by Jean-Julien Rojer kept Springfield in it. Monroe later double-faulted twice as the Lasers earned the break and forced the tiebreaker of the match. The Kastles, though, got a mini-break of Rojer and Robert Lindstedt to earn the win.

Washington took advantage of its break opportunities in the win. The Kastles went 6-for-9 on break points, a nice 67% conversion rate. Springfield, conversely, was just 3-for-11 (27%).