Philadelphia Gets Closer to No. 1 Overall Seed, Rolls San Diego 24-19 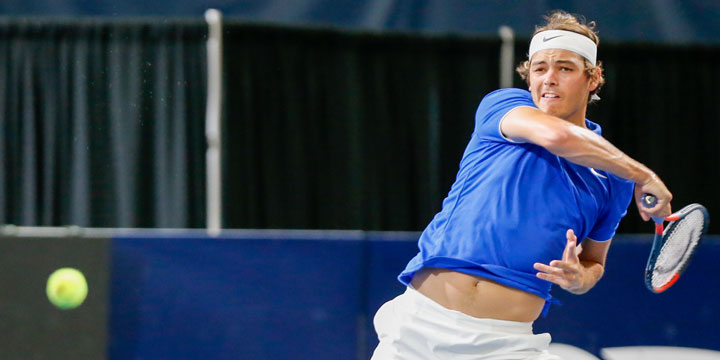 The Philadelphia Freedoms took a big step to clinching the top spot in the upcoming WTT Playoffs after defeating the San Diego Aviators 24-19 in World TeamTennis action Tuesday afternoon at The Greenbrier.

The first-place Freedoms, who won four of five sets in their victory over San Diego, improve their season record to 10-2.

Taylor Fritz gave Philadelphia an early lead as the 22-year-old native of Rancho Santa Fe, Calif., overpowered Ryan Harrison of the Aviators in a 5-3 victory in men’s singles. Fritz blasted eight aces and never faced a break point in the opening set, which took 18 minutes.


#WTT2020 @GuaranteedRate Player of the Match @Taylor_Fritz97 chatted with @OliviaDekker after a big 24-19 win for the @PhillyFreedoms over the @SDAviators to keep hold of the No. 1 spot in the rankings. He talks about his serving, his advice for @SofiaKenin and more! pic.twitter.com/hUJvQqQGfa

Later, with Lisicki holding a 3-2 lead, Kenin fended off three break points and proceeded to hold serve when she hit a service winner on a deciding 3-3 point.

With the set score knotted at 3-3, each player held serve to send the set to a tiebreak at 4-4. Kenin raised the level of her game and won the first three points of the tiebreak.

Down 0-3 in the tiebreak, Lisicki fought back to win three of the next four points, but with a 4-3 lead, Kenin executed a perfect down the line backhand winner on set point to close out the tiebreaker and win the women’s singles
set 5-4 in 37 minutes.

As San Diego trailed the Freedoms 10-7, Harrison and Kveta Peschke stepped on the court to face Fabrice Martin and Taylor Townsend of the Freedoms in mixed doubles.

The set was tied at 3-3 when the Freedoms broke Peschke to take a 4-3 lead. In the next game, Townsend fought off break points and slammed a service winner on a deciding 3-3 point to serve out the set for a 5-3 win in Mixed Doubles.

After winning the first three sets of the match, the Freedoms led the Aviators 15-10 heading into halftime.

Christina McHale and Peschke put the Aviators in the win column as they took 39 minutes to defeat Townsend and Caroline Dolehide 5-4 in women’s doubles and cut the Freedoms lead to 19-15.

The entertaining women’s doubles set featured four service breaks and with the score tied at 4-4, it was decided in a tiebreaker.

Townsend and Dolehide took a 2-0 lead in the tiebreak, but McHale and Peschke roared back to win five straight points and win the set when Townsend’s lob service return went long on the first set point.

With the Aviators trailing by four games, San Diego’s comeback hopes rested on the shoulders of Harrison and Jonny O’Mara as they took on Fritz and Martin of the Freedoms in men’s doubles.

After Harrison held serve to start the set, Fritz hit two aces and easily held serve to tie the set at 1-1. The Freedoms then substituted Donald Young for Fritz. Each player continued to hold serve and for the third time in the match a set would be decided in a tiebreaker.

The Aviator took a commanding 4-1 lead and the match looked to be headed to Extended Play, but the Freedoms rallied to even the tiebreak at 4-4. On the final point, Young put away a high backhand volley to seal the victory for Philadelphia.

Following the Freedom’s win, Fritz was asked about his overpowering serve which helped Philadelphia get past San Diego.

“As long as I’m feeling confident with my serve and holding serve, I can relax a bit and play the return game and add pressure against my opponent to hold serve. It just sets me up to play confidently,” Fritz said.

Today’s match against the Freedoms was played indoors due to inclement weather. It was the second time this season the Aviators played a match indoors at The Greenbrier.

This past Sunday, the Aviators acquired Kveta Peschke of Czech Republic and Germany’s Sabine Lisicki as part of the trade that sent Coco Vandeweghe and Nicole Melichar to the New York Empire.

San Diego tennis fans may remember the talented Peschke, a World TeamTennis veteran who is playing in her 9th season. The 45-year-old Peschke, a former No. 1 doubles player in the world, played for the Aviators in 2014 when the team played its home matches at the San Diego Sports Arena.

Lisicki also has a noteworthy San Diego connection. She came to San Diego in 2008 as a member of the German Fed Cup team for a match against the United States. The Fed Cup tie was played at the La Jolla Beach & Tennis Club, one of the premier tennis destinations in the county. A temporary stadium with an outdoor hard court was built for the match.

Playing in the first match of the tie, Lisicki scored a huge win for Germany as she upset former World No. 1 Lindsay Davenport 6-1, 7-5 to give Germany an early lead.

The United States ultimately prevailed 4-1, but Lisicki was on her way to becoming a star on the international tennis circuit. She reached a career-high No. 12 in the WTA singles ranking in 2012 and reached the Wimbledon singles final in 2013.

The Aviators will close out their 2020 World TeamTennis season on Thursday at 4 p.m. (PDT) against the Chicago Smash at The Greenbrier. The Smash defeated San Diego 20-16 last week in their only other meeting this season. Chicago, one of the top teams in the league, has already clinched a spot in the WTT Playoffs.