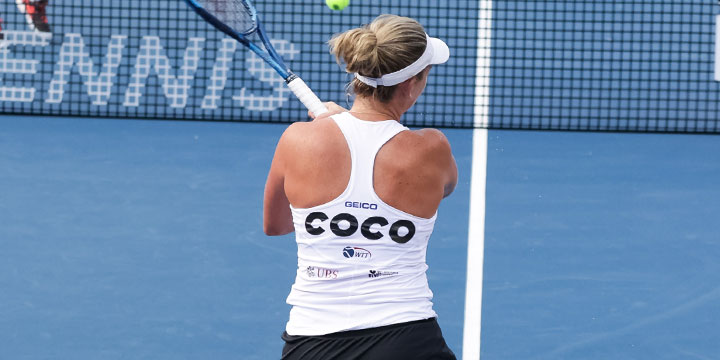 White Sulphur Springs, W. Va. — Late on Sunday night, a trade deal was struck between New York Empire and the San Diego Aviators. The lateness of the decision had a logical excuse: San Diego had just lost to Philadelphia 20-18 after sweeping the first three sets of doubles.

“Philadelphia is one of the best teams right now and their women’s doubles is always scary,” Jensen said. “Taylor Townsend is the most lethal weapon in WTT. We’re just dinged up and now I look at what they did against Philadelphia and Nicole Melichar and CoCo Vandeweghe just took it to them. When I saw that I thought this is a really good opportunity if we can make it happen.”

Going into the final stretch of the 2020 season, Vandeweghe and Melichar will switch jerseys from San Diego to New York, and look to help Empire clinch a playoff berth. Kveta Peschke and Sabine Lisicki have been shifted over to San Diego’s team.

“My reaction was ‘surprise,'” Vandeweghe said. “I wasn’t aware that I was being talked about in a trade. I know that Nicole and I have been playing really well together, but I really didn’t think I nor Nicole were in consideration to be traded anywhere.”

In fourth place, The Empire is very much in playoff contention with a 6-5 season record. They’re just one game behind Orlando Storm, while the Aviators are 3-8 and in eighth place, making them ineligible to advance. Kim Clijsters is the superstar of the New York roster, but she’s been sidelined with injuries as she navigates her comeback.

Even if she’s on the bench, just being on the same team with Clijsters is a thrill for anyone.

“I love Kim. She gave me my first trophy at s’Hertogenbosch,” said Vandeweghe, who won the grass-court WTA International in 2014 and ’15. “She’s one of the nicest people. I’m super pumped.”

A doubles team trade is rare, but in this particular case, it made a lot of sense. Vandeweghe and Melichar have gone 8-2 together with some big wins including over Sofia Kenin and Townsend (Philadelphia), Venus Williams and Arina Rodionova (Washington), Clijsters and Lisicki (New York), Bethanie Mattek-Sands and Eugenie Bouchard (Chicago) and Andreja Klepac and Gabriela Dabrowski (Orange County).

Vandeweghe and Melichar’s 5-3 win over Kenin and Townsend on Sunday night proved to be more crucial than they could have imagined with Jensen watching closely from the stands.

“If San Diego had won over Philadelphia, it wouldn’t have worked,” New York Empire coach Luke Jensen said. “You have to have the right pieces in place to negotiate. San Diego finished late. We just had a big win against Washington and Venus Williams but we’re not in the playoffs, we’re in a pivotal position. Since San Diego just lost, we were able to make a nice deal.”

Both of his new players are Grand Slam champions with Vandeweghe winning the 2018 US Open with Ashleigh Barty and Melichar capturing Wimbledon that same year with Alexander Peya. Vandeweghe has a natural New York connection having been born there, but even Melichar and Jensen also go way back.

When he was recruiting as the head coach for Syracuse, Jensen would send potential recruits postcards, and a teenage Melichar received one—and kept it.

“This year at WTT she knew I was going to be here so she brought the postcard,” Jensen said. “I had written her a postcard from Wimbledon in 2010. It had British stamps on it and I’d said, ‘Come to Syracuse, I’ll train you to win Wimbledon.’ And so she ends up winning Wimbledon. Isn’t that cool? I had nothing to do with the training but it’s amazing.”

As a longtime coach in college and WTT, Jensen is used to managing recruits, negotiating and making tough decisions. He had to drop two of his own to make an upgrade. Lisicki, a Wimbledon finalist in 2013, and Peschke, a former doubles No. 1, had put up a 2-4 record together.

“I had to call them and tell them we’re moving in another direction,” Jensen said. “The bottom line is you don’t want to be traded, you want to be part of the team, but in the end it was an organizational decision.  I have a lot of respect for Lisicki and Peschke. It’s part of the business side of it.”

Now Vandeweghe and Melichar have been given an unexpected second chance at hoisting the King Trophy at The Greenbrier.

“It’s a huge turnaround, a total 180,” Vandeweghe said. “With San Diego, we weren’t even in the hunt and then now we’re actually about to go to the playoffs or at least have a chance to make it there.”

It’s more than just playoff hopes for Vandeweghe. The former world No. 9 has been playing doubles and mixed this season, but she’s eager for a shot at singles. After all, she’s a former world No. 9 and has reached the semifinals of both the Australian Open and US Open.

“Unfortunately, I never got the opportunity to be able to play singles for the Aviators, but I wanted to play singles and now I have the chance so I’m going to make the most of it,” Vandeweghe said. “That’s all I’ve been looking for since coming back from injury is the opportunity to be able to play. With coronavirus and the way things started out her at WTT I wasn’t getting it, so I’m happy to have a second life basically.”