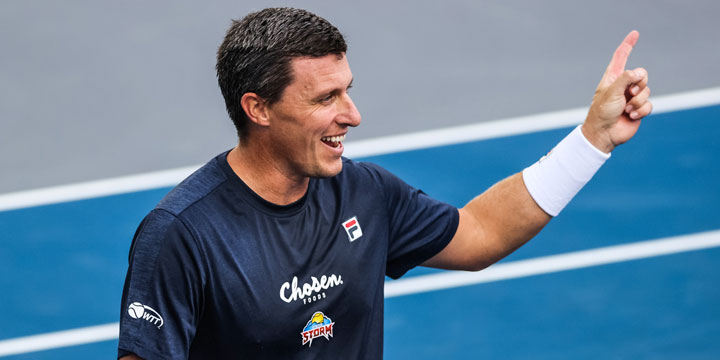 It wasn’t easy, but the Orlando Storm took another step to clinching a spot in the World TeamTennis Playoffs as they held off the San Diego Aviators 19-15 in WTT action at The Greenbrier.

With Monday night’s victory, the Storm is in third place in the WTT Standings with an 8-4 record and two regular season matches remaining. Orlando is currently on a five-match winning streak.

ORLANDO STORM vs SAN DIEGO AVIATORS MATCH STATS
The big news for the Aviators came on Sunday night as the team made a trade involving four players. Prior to the midnight trade deadline, San Diego dealt past Grand Slam doubles winners Coco Vandeweghe and Nicole Melichar to the New York Empire. In return, the Aviators received Kveta Peschke, Sabine Lisicki and financial considerations from the Empire.

The Storm got off to a fast start against the Aviators as Ken Skupski and Jessica Pegula of Orlando began the match in mixed doubles against San Diego’s Christina McHale and Jonny O’Mara.

Orlando broke serve in the opening game when O’Mara double faulted on break point. Later, with the Storm leading 4-2, Skupski blasted a brilliant down the line backhand service return past O’Mara to break McHale and wrap up the set 5-2 in 22 minutes.

In women’s singles, Pegula routed Lisicki 5-0 in 22 minutes as she broke the newly acquired Lisicki in the second and fourth games of the set. Leading 4-0, Pegula put away the set when Lisicki’s backhand cross court service return floated long on a deciding 3-3 point.

With the Storm taking a commanding 10-2 lead, Aviators Coach John Lloyd sent in Ryan Harrison for men’s singles against Tennys Sandgren of the Storm.

Earlier this season when the Aviators faced the Storm, Harrison defeated Sandgren 5-4 in men’s singles, then won a game in Extended Play to send the match to a Supertiebreaker. Unfortunately for the Aviators, Sandgren won the Supertiebreaker 7-5 to give Orlando the victory.

In Monday’s encounter, Harrison and Sandgren held serve through the first six games of the set, but at 3-3, Harrison dropped serve when he punched a backhand volley wide on break point.

The one service break is all Sandgren needed as the two-time Australian Open quarterfinalist served out the 5-3 win in Men’s Singles in 21 minutes when Harrison netted a forehand on set point. The Storm extended their lead to 15-5 at halftime.

Christina McHale and new teammate Kveta Peschke gave the Aviators a ray of hope in the next set as they cut Orlando’s lead to 16-10 with a convincing 5-1 victory in 34 minutes over Jessica Pegula and Darija Jurak in women’s doubles.

The win in women’s doubles set the stage for the final set of the evening for the Aviators as Harrison and Jonny O’Mara took on Skupski and Sandgren of the Storm in men’s doubles.

O’Mara and Harrison, playing one of their best sets of the season, combined for two service breaks and established a 4-2 lead. O’Mara then served out the set for a 5-2 win in 26 minutes to force the match into Extended Play with Orlando leading 18-15.

Any hopes of a San Diego miracle comeback were quickly extinguished in the first game of Extended Play when Skupski slammed an unreturnable overhead at 40-15 to close out the victory for Orlando.

“We knew today was a huge day. We managed to get a victory today. It was a tough match. In terms of the score line, it looked quite easy at the start, but every match was pretty close,” Skupski said after the match. “We have a few more days to keep building towards the playoffs.”

San Diego’s season record falls to 3-9. The Aviators have lost their last six matches in a row.

When the Aviators played the Philadelphia Freedoms this past Sunday, San Diego fans had the opportunity to watch one of the top young American stars in professional tennis. Sofia Kenin, a native of Russia, who now lives in Pembroke Pines, Fla., captured her first Grand Slam singles title this past January when she won the Australian Open women’s singles title. This past March, the 21-year-old Kenin achieved a career-high No. 4 in the WTA singles rankings.

San Diego fans got a glimpse of the future champion back in the summer of 2015 when she was 16 years old. Kenin came to San Diego to play in the USTA Girls’ 18s National Championships at the Barnes Tennis Center. Seeded third, Kenin received a first-round bye in the 256-player singles draw and proceeded to win seven straight matches to win the title. In the final, she battled for over three hours to defeat top-seeded Tornado Alicia Black of Boca Raton, Fla., 6-2, 5-7, 7-5.

Kenin received a wild card to the 2015 US Open for winning the USTA Girls’ 18 National Championship. Even though she lost 6-3, 6-1 to Mariana Duque-Mariño of Colombia in the first-round of the US Open, Kenin gained valuable experience that eventually helped make her a Grand Slam singles champion.