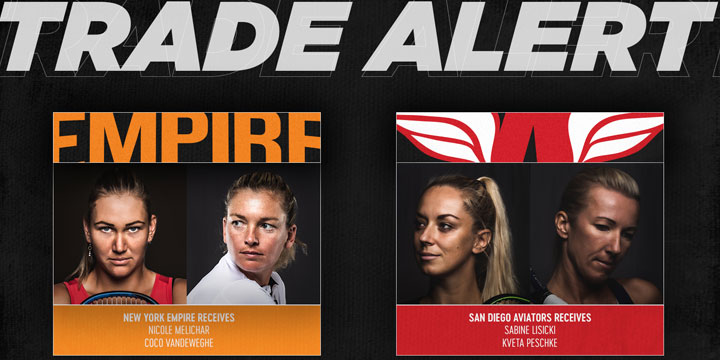 The 28-year-old Vandeweghe, winner of the US Open doubles title in 2018, and 26-year-old 2018 Wimbledon mixed doubles champion Melichar were traded for the Empire’s former world No. 1 doubles player Kveta Peschke, Sabine Lisicki and financial considerations.

The Empire currently sit in fourth place in the league standings with a 6-5 record, just one game behind third-place Orlando (7-4) and a game ahead of the Washington Kastles (5-6) for the final playoff spot.

“Adding two of the world’s best women’s doubles players like Coco Vandeweghe and Nicole Melichar will hopefully be what we need to hold our playoff spot, and possibly move up,” said Empire Coach Luke Jensen. “A coach couldn’t ask for more than inserting two former Grand Slam winners into our lineup for the final week of what has been a historic season. Kveta and Sabine were great teammates and it was a tough decision to make. San Diego will benefit by adding these two players and we wish them the best heading into the final week of the season.”

The Freedoms and the Chicago Smash have already clinched playoffs spots heading into the final week of the season. The WTT Semifinals take place on Saturday, Aug. 1 and will air on CBS Sports Network. The WTT Final is Sunday, Aug. 2, live on the CBS Television Network. WTT has increased its prize money to a record $5 million and an added $1,000,000 awarded in WTT Playoffs compensation, including a $500,000 bonus to the team hoisting the King Trophy on Aug. 2.