Taylor Fritz Leads Philadelphia to Come-From-Behind Win Against San Diego; Hold on to No. 1 Seed 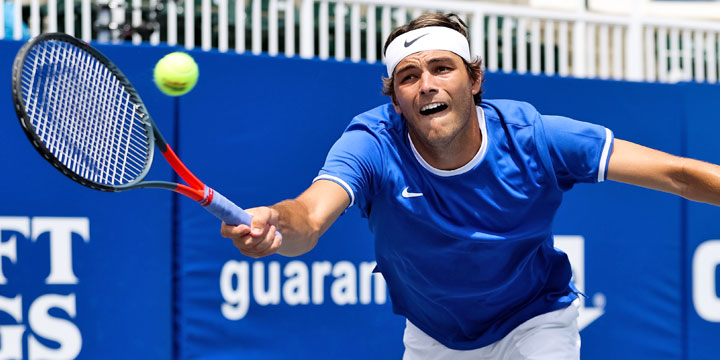 Taylor Fritz, who is in his fourth season of World TeamTennis, likes playing in the final set of an evening that features one set each of men’s and women’s doubles, men’s and women’s singles and mixed doubles because he loves the pressure that comes with the potential of closing out a match.

“We have a lot of experience on our team,” said Fritz who won 16 of the final 23 points in the set. “I just like the fifth spot and the pressure of closing out a match that comes with playing in the fifth spot.”

#WTT2020: @GuaranteedRate Player of the Match @Taylor_Fritz97 chatted with @NickGismondi after finishing come-from-behind 20-18 win for the @PhillyFreedoms over the @SDAviators. He talks about the importance of winning these final matches, handling pressure and more! pic.twitter.com/sqBkCcQyoJ

Thanks to a 5-2 victory by Sofia Kenin over Christina McHale in women’s singles, the Freedoms sliced a 16-10 deficit to 17-15 heading into the final discipline which was men’s singles and setting up the dramatic finish.

Sunday’s win marked the second time in three days Philadelphia faced an early deficit before rallying for the win. When the Freedoms took the court tonight, they did so knowing they had clinched a playoff spot for the third consecutive season thanks to the New York Empire’s 25-15 win over the Washington Kastles.

The Freedoms, who earned the No.1  seed in the playoffs the past two seasons, remain atop the standings thanks to their win this evening. Philadelphia (9-2) remains tied with Chicago but currently holds the tiebreaker since they defeated the Smash on July 21.

“We definitely want to finish the season as the No. 1  seed,” said Fritz following the match. “We know every game counts and after suffering a tough loss to Orlando on Saturday we knew we had to buckle down and stay focused but also keep having fun.”

San Diego would come out strong in tonight’s match with the duo of Harrison and CoCo Vandeweghe defeating Philadelphia’s Taylor Townsend and Fabrice Martin 5-3. With the opening set of mixed doubles knotted at 3-3, the Aviators would come through breaking Fritz on four consecutive points to take a 4-3 lead before Vandeweghe would hold serve winning a deciding point to give her team an early 5-3 lead.

Next up was women’s doubles and this time Vandeweghe would team up with Nicole Melichar and hand Philadelphia’s pair of Kenin and Townsend a 5-3 loss to widen San Diego’s lead to 10-6.

Philadelphia tried to fight back when men’s doubles took the court, but each time Fritz and Martin would slice into the lead, Harrison and Johnny O’Mara would hold serve and push the lead back out. Harrison and O’Mara would eventually earn the 5-4 win (5-2 in the tiebreak) to push San Diego’s lead to 15-10 heading into halftime.

Sofia Kenin was selected as the Mover of the Match clocking 1,748 feet. McHale would clock 1,624 feet.

The San Diego Aviators return to the court on Monday when they take on the Orlando Storm at 7 PM ET/4 PM PT. The Philadelphia Freedoms have a rematch with the Aviators on Tuesday at 3 PM ET/Noon PT. Both matches will be televised by the Tennis Channel.