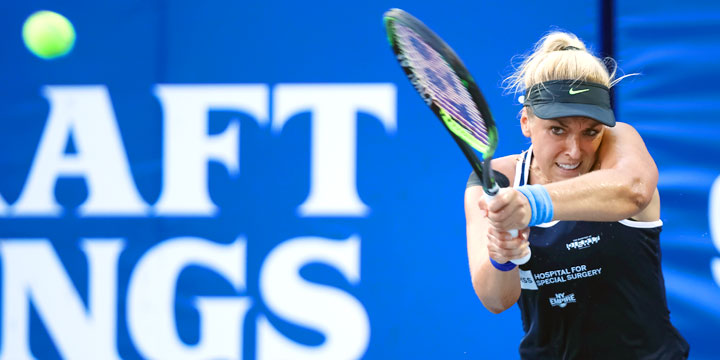 Her first task of the match: face former No. 1 player Venus Williams.

NEW YORK EMPIRE vs. WASHINGTON KASTLES MATCH STATS
So it was no wonder another former No. 1 women’s player – Kim Clijsters – embraced a teary-eyed Lisicki after her 5-3 victory over the legend, which helped the Empire to a 25-15 much-needed victory against Washington.

“It was tough for me because these have been my first (singles) match in over a year,” said Lisicki, who stepped into women’s singles for Clijsters, who is nursing an abdominal strain. “Plus the quarantine, plus the first time in World Team Tennis, it’s a very quick game, so I had to get used to that as well. I got subbed out a couple of times so that was tough, but I just hung in there and I kept going to the practice court and putting in more work after the matches and I think all of that helps. Always great to play a champion like Venus and an honor to be a court with her.”

New York dominated from the outset and did a good job of sustaining momentum, impressively winning men’s doubles, women’s singles, and mixed doubles in convincing fashion. The Empire finished things off with tiebreak victories in women’s doubles and men’s singles.

Neal Skupski and Kveta Peschke wasted no time in establishing their dominance and showed why they’ve been New York’s best tandem during the 2020 WTT campaign. Skupski and Peschke have combined to win 53 of 90 (.589) games this season after opening the match with a 5-2 victory over Marcelo Arevalo and Bernarda Pera. Three of the five points came by way of broken serves.

After Arevalo and Pera tied the set 2-2, Skupski and Peschke turned it up a notch by breaking Arevalo’s serve a second time. Then it was Skupski with three straight aces and Peschke with the kill shot at the net to make it 4-2. With momentum clearly in their favor, the Empire duo broke Pera’s serve to seal the set win, setting things up for Lisicki’s epic win.

Williams held serve to start the set, but Lisicki responded by holding her first serve and then dominating the legend to take a quick 2-1 lead. Lisicki, who holds the record for the fastest serve on the WTA serve at 131 miles per hour, took a commanding 3-1 lead in the set with a 120-mph ace on her final serve. The ladies held serve thereafter to finish the set.

“When you look at Sabine, you got a high tennis IQ,” New York coach Luke Jensen said. “She understands the tactics, she understands the technique —  if things aren’t working she knows how to get out of something really fast and she knows how to stay with the winning gameplan. … You’re playing Venus Williams, who is going into the Hall of Fame. To be able to sit there and articulate like a chess master, really is the difference.”

Lisicki, a rookie in her first full season of World TeamTennis, is a former German No. 1 player who has won four WTA singles titles was a finalist at Wimbledon in doubles (2011) and singles (2013). But based on her emotions, she registered what may have been her biggest win of the WTT season.

“I’ve played Venus so many times, so I was ready to compete against her and I knew I had to fight and show some of my best tennis to win,” Lisicki said. “I stayed composed and that’s what Kim said, to say composed and keep going. It’s just a big step coming back and winning a set against her, it shows you are there, so you have to keep going because she is playing better and better. I’m very happy that I kept up with her.”

New York’s momentum of the match carried into the third set, as Jack Sock and Skupski rolled through men’s doubles defeating Arevalo, who teamed with Nick Monroe and Tommy Paul. Down 2-3 in the set, Washington coach Robby Ginepri switched out Monroe, who was set to serve for the Kastles next, for Paul, likely looking to shake things up with his men’s singles. But Paul appeared cold and couldn’t overcome the powerful tandem of Sock and Skupski, who took the set, 5-2.

Williams did her best to get Washington back into the match, teaming with Arina Rodionova in women’s doubles, eventually forcing a tiebreak after registering the Kastles’ second service break in the match. But Lisicki wasn’t done when staring Williams in the face. The rookie starlet of the day gave the Empire a 4-2 lead in the tiebreak with a nifty backhand past Williams, who was just across the net.

“I just kept going for it,” Lisicki said. “In doubles you have less space to go for it, I’m just happy we pulled that one off as well.”

Peschke finished things off with her second serve, giving the Empire the set and a 20-11 lead in the match heading into the final set.

Sock defeated Paul in men’s singles, 5-4, to conclude the match and put the Empire back into the playoff picture.

This was huge,” Jensen said. “We’ve relied so much on our megastars. Sabine was our MVP today. She came up really big in big moments. To me, it’s tough getting used to the speed of World Team Tennis, the nuances of team tennis, and everything that’s going around. I think this is the best team effort we’ve had and this really kind of gives us some rocket fuel with a day off tomorrow to get ready for the last three matches.”

The legendary Williams has taken the mask-on approach seriously during the WTT season. Williams has made it no secret she has Sjögren’s syndrome, a debilitating autoimmune disease with a wide range of symptoms, from joint pain and dry mouth to swelling, numbness, burning eyes, digestive problems, and fatigue. Though players are allowed to take their masks down once they arrive to the court, Williams has worn hers at all times when she hasn’t been on the court.

Soaking up knowledge for the younger players is always important during World TeaTennis. And 18-year-old Hailey Baptiste from Washington D.C. has gotten her fair share as a fill-in player this season. After sitting alongside 2016 Olympic champion Monica Puig and the likes of the Bryan brothers with the Vegas Rollers, Baptiste was on the Empire bench for this match, watching with former No. 1 Kim Clijsters.

New York will face the Orlando Storm on Tuesday at 7 p.m. ET/4 p.m. PT, with the match being broadcast on the CBS Sports Network. The Kastles return to action on Tuesday, when they’ll face the two-time defending champion Springfield Lasers at 11 am ET/8 am PT on the Tennis Channel.