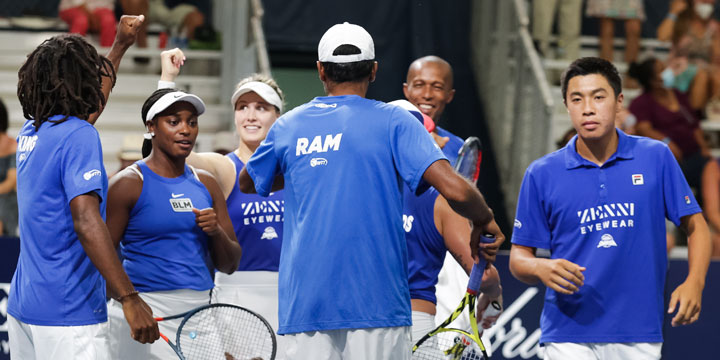 The expansion Chicago Smash took to the court Sunday with a World TeamTennis playoff berth already in their back pocket. It remained to be seen whether Coach Kamau Murray’s squad would keep the pressure on Philadelphia for the top seed.

Earlier, New York beat Washington, 25-15, to lock in Chicago and Philly – the WTT front-runners – which entered the day tied atop the standings.

VEGAS ROLLERS vs CHICAGO SMASH MATCH STATS
Playing indoors because of inclement weather, the blue-collar Smash marched to their fourth consecutive match win and swept the season series against the Vegas Rollers with a 22-18 decision at The Greenbrier.

Men’s doubles were first out of the chute, a matchup featuring the 42-year-old Bryan brothers – Bob Bryan and Mike Bryan – against Rajeem Ram and Brandon Nakashima.

Playing in a match featuring three Grand Slam doubles champions, 18-year-old Nakashima opened with a first-serve ace to set the pace for Chicago, 1-0. Both teams held serve through 4-4 to force a 9-point tiebreaker.

Vegas took a 4-2 advantage after a double-fault by Ram, the Guaranteed Rate Player of the Match, and wrapped up the set 5-3 to give the Rollers a 5-4 lead.

#WTT2020: @GuaranteedRate Player of the Match @RajeevRam chatted with @OliviaDekker after @ChicagoSmashWTT's 22-18 win over the @VegasRollersWTT. He talks about playing with Brandon Nakashima, his dynamic with @matteksands and more! pic.twitter.com/ETU49hzsdo

Ram said the chemistry with Nakashima is unique regardless of the youngster’s experience. “[I] just try not to mess up, just do my part,” Ram said. “He’s so good. [Doubles] is a good way for him to get rolling and then play well in the singles.

“Unfortunately, we didn’t quite get [the men’s doubles win] today, but he’s such a good player that it’s fun to be on the court with him.”

In men’s singles, Nakashima squared off against eight-year WTT veteran Sam Querrey. The volley-filled match was tit-for-tat with each player holding serve – including a love-service effort from Nakashima to force another 9-point tiebreaker.

Querrey had two service points to knot the game at 3 before Nakashima took control. The first-year WTT standout served out the game, capitalizing on a backhand winner down the line and a final serve and volley hammered home to take the set 5-4 and tie the match at 9-all.

While he wasn’t paired with BMS, Ram noted it wasn’t the first time he and Stephens had been together on the court. “Sloane and I played once, years ago, and it’s just easy to step in,” he said. “We sub people in and out, and Bethanie just wanted to do one [match] today.

“She did great in the one, and Sloane and I were able to pull it off. It was just chemistry that helped us. I think we’re all just having a great time out there.”

The Smash tandem took a three-game lead before Puig served the Rollers’ first point to trim Chicago’s advantage to 12-10. Ram promptly replied with a love-service, then knotted the deciding game at 30-30, and put the Smash a point away at 40-30. On the deciding point, however, Bryan unleashed a 106-mph serve to pull the Rollers within 13-11. Stephens then capped Chicago’s 5-2 set win.

Leading 14-11, Chicago’s Murray continued to shake up the lineup. Genie Bouchard was tabbed for the women’s singles match against Ajla Tomljanovic. The Smash’s fifth-year WTT star fell behind 0-40 before rallying to take the first game.

Tomljanovic broke the third game to pull the Rollers within 15-13 after a double-digit serve and volley exchange that ended with a Bouchard return finding the net. The WTA’s 56th-ranked player, Tomljanovic had reeled off three consecutive game wins before Bouchard held serve to pull within 3-2.

Playing in her first WTT campaign, Tomljanovic wrapped the set, 5-3, with a love-service to trim the Rollers’ deficit to 17-16.

The final set featured Tomljanovic and Puig against the duo of Mattek-Sands and Bouchard, who was looking to improve on Chicago’s 8-2 mark in women’s doubles.

After swapping points, the Smash broke Vegas’ serve in the third game to forge a 19-17 lead. BMS capped a love-service with an ace to ratchet up the pressure on the Rollers, who faced elimination from playoff contention with a loss.

“When you get to know someone for so many years, then play as kids, play on a stage like the [2016] Olympic gold-medal match, it’s pretty special,” Ram said of his relationship with Mattek-Sands. “Really, I’m just pumped to be on the team with her. Everyone has a great personality, but it’s fun to be on the same team with her.”

Mattek-Sands and Bouchard pressed forward to take a two-game lead and claimed the match, 5-2, after Puig returned a volley into the net for the 22-18 win.

Ram scored 48 points on Sunday – 25 in men’s doubles and 23 in mixed doubles – with a .875 winning percentage on first-serve points (14 of 16). He and Barbora Krejčíková won the 2019 Australian Open mixed doubles title, while Ram and Joe Salisbury captured the 2020 Aussie men’s doubles championship.

The Smash wrap up four consecutive days of on-court action with an 11 a.m. ET match Monday against Orange County. The match will be televised on the Tennis Channel. Chicago downed the Breakers, 23-16, on July 15.