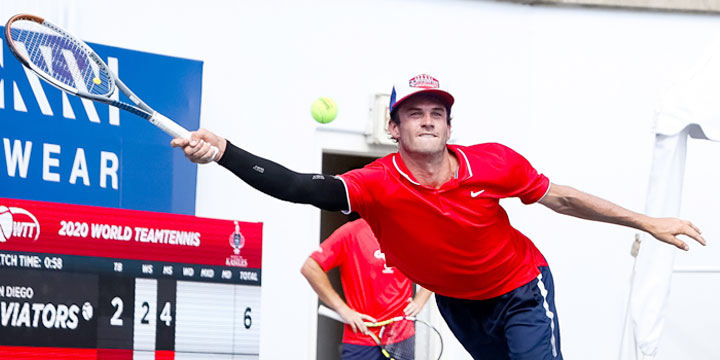 The Washington Kastles, playing solid tennis from start to finish, evened their season record at 5-5 with a hard-fought 23-16 win over the San Diego Aviators in World TeamTennis action on Saturday afternoon at The Greenbrier.

The Aviators, who have now dropped their last four matches in a row, fall to 3-7 this season. San Diego has four matches remaining and could play the role of spoiler as they face the league-leading Philadelphia Freedoms twice and the second-place Chicago Smash once.

The Kastles got off to a strong start against the Aviators, winning women’s singles and men’s singles to begin the match.

After exchanging service breaks early in the women’s singles set, Bernarda Pera slammed a beautiful down the line forehand winner at 40-30 to hold serve for a 3-2 lead over Christina McHale of the Aviators.

In the next game, McHale tried to save a break point, but Pera hit a strong backhand service return to draw the error and secure the service break and a 4-2 advantage. Pera continued her aggressive play as she easily held serve to win the set 5-2 in 23 minutes.

When the Aviators faced the Kastles earlier this season, Ryan Harrison defeated Tommy Paul 5-4 in Men’s Singles. Today, it was Paul who came away with the victory over Harrison.

Harrison and Paul each held serve through the first eight games of the set and at 4-4, like their previous head-to-head encounter, they played a tiebreaker to decide the outcome.

After losing the first point of the tiebreak, Paul won the next three points for a 3-1 lead. Harrison came back to tie the score at 3-3 when he hit a down the line forehand winner and Paul’s cross-court forehand sailed long.

On the next point, Harrison’s forehand clipped the tape and at 4-3 in favor of the Kastles, Paul clinched the tiebreak when Harrison sent a forehand service return long.

With the 5-4 win in men’s singles, which took 36 minutes, the Kastles extended their lead over San Diego to 10-6.

The Aviators then looked to CoCo Vandeweghe and Nicole Melichar to ignite their come back hopes in Women’s Doubles against Washington’s Arina Rodionova and Venus Williams, the 23-time Grand Slam champion and former World No. 1.

In the third game of the set, Melichar put away a cross-court backhand volley on a 3-3 deciding point to break Rodionova for a 3-1 lead.

The Kastles led the Aviators 13-11 as Ryan Harrison teamed with Vandeweghe in mixed doubles against Pera and Marcelo Arevalo of the Kastles.

Harrison held serve in the first game of the set to cut the Kastles lead to one game and the Aviators were on the verge of tying the match in the following game when they had two break points against Arevalo.

However, the crafty 29-year-old from El Salvador saved both break points to hold serve. At that point, the momentum shifted in the Kastles favor as Washington broke the match open, winning the next four games for a surprising 5-1 mixed doubles win in 30 minutes.

The Aviators trailed Washington 18-12 going into men’s doubles with Harrison and Jonny O’Mara playing Arevalo and Nick Monroe of the Kastles.

With no service breaks, the final set was tied at 4-4 and would go to a tiebreak where the Aviators took an early 3-1 lead. The Kastles rallied to tie the score at 3-3.

With the Aviators serving the last three points of the tiebreak, O’Mara threw in two double faults to seal the 5-4 victory in men’s doubles for the Kastles.

There are times when a player is a perfect fit for World TeamTennis. Jonny O’Mara of the San Diego Aviators is one of those players. The 25-year-old doubles specialist from Scotland brings lots of enthusiasm and excitement to the court that fires up a WTT crowd during matches.

The Aviators can thank his fellow Brits, brothers Neal Skupski of the New York Empire and Ken Skupski of the Orlando Storm, for introducing O’Mara to World TeamTennis.

“I watched quite a few (WTT) matches because I get on really well with the Skupski’s and I was watching Neal play for New York (in 2018). I love the format and combining the sexes out there. The scoring system and music in between every point. It’s fast tennis. I thought it was so intriguing,” said O’Mara, who made his WTT debut last year with the Aviators.

“To be able to play (WTT) last year was so much fun and probably the highlight of my year. It was all great. Playing on our home court, that was by far for me the best court, best crowd and best atmosphere of any of the matches. To play seven matches in that environment was absolutely brilliant,” O’Mara added.

With doubles being so prominent in the World TeamTennis format, O’Mara has become a big supporter of WTT and fans could expect to see him competing in future WTT seasons.

“It’s what tennis is looking for. It’s entertaining, it’s fast, it’s fun. It’s very 21st century. It’s exciting to play in. There is such a great buzz about it,” he said.

The Aviators will take on the league-leading Philadelphia Freedoms at 4 p.m. (PDT) on Sunday at The Greenbrier. The match will be the first of two meetings between San Diego and Philadelphia this season. Philadelphia will be the designated Home Team. Last summer, the Freedoms swept a pair of matches against the Aviators, winning 25-11 early in the 2019 season and 23-16 one week later in Carlsbad, Calif.