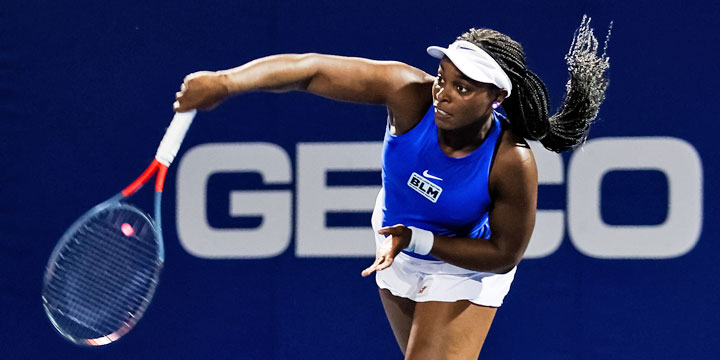 Entering play with the chance to tie Philadelphia atop the World TeamTennis standings, Chicago rallied past New York on Saturday behind the solid play of Sloane Stephens at Center Court at Creekside at The Greenbrier.

Facing the Empire for the second time in eight days, the Smash played another nip-tuck match against Coach Luke Jensen’s playoff-contenting squad. In the end, Stephens noted the team’s cohesiveness paid dividends.

“It’s a perfect training environment with all these amazing players and playing high-quality matches,” she said. “It’s been great, and we’ve been gelling and having a great time as a team. It’s been awesome.”

Men’s doubles kicked off the evening’s play, with the Empire’s Jack Sock and Neal Skupski – the second-best men’s tandem in WTT – facing Rajeev Ram and Brandon Nakashima. Each player held serve through 4-4 to force a 9-point tiebreaker.

In men’s singles, Nakashima knocked off Sock, 5-3. After splitting the first two games, Nakashima took four of the next six to give Chicago a 9-8 lead.

While Sock was averaging almost 130 mph on serves, Nakashima remained nonplussed and methodically worked the baseline. In the final game, the 18-year-old WTT rookie fell behind 0-15 before posting back-to-back aces en route to the win.

The mixed doubles featured substitutions on both sides of the net. The Smash (8-2) opted to lift Bethanie Mattek-Sands in favor of Genie Bouchard, while the Empire sent out Socks and Hall of Famer Kim Clijsters instead of the scheduled Skupski and Kveta Peschke duo.

New York took control early, winning the first two games. Chicago managed to knot the score at 10 before the Empire took three of the final four games for a 13-11 lead as Bouchard double-faulted to end the set.

New York’s Hailey Baptiste was called on for the women’s singles match against Stephens. (And you had to wonder if Sock was trying to find a wig to get back on the court; it was the fourth time this season a men’s player had competed in singles, doubles, and mixed play in the same match.)

“When it got close, playing fourth is always a little tough,” said Stephens, the Guaranteed Rate Player of the Match. “I haven’t played well at fourth, so I was really glad to get the win.

“Obviously, I’ve been playing better and better as the weeks have gone by [but] I was just really happy to get the win, 5-1, and help the team get a two-game lead going into the final set.”

Stephens, the 10th-ranked women’s player in WTT, dropped the first game before turning up the wick to reel off five consecutive wins against the 18-year-old for a 16-14 Smash advantage.

“I’ve practiced with [Hailey] a lot since we’ve been here,” Stephens noted. “It was a nice matchup, and I was happy to pull through in the end.”

With the match on the line, Chicago pacesetters Mattek-Sands and Bouchard looked to push the Smash into a first-place tie with Philly.

Baptiste, playing with 45-year-old former top-ranked doubles player Peschke, held serve in the first game to breathe life into the Empire’s upset hopes. However, Bouchard served to pick up a game before Chicago broke Peschke’s serve to lurch ahead 18-15.

Down the stretch, BMS held serve to push the Smash ahead 19-15. After dropping three consecutive games, Clijsters was subbed in to replace Peschke, and the Empire picked up a point to draw within 19-16.

Bouchard responded with a love-serve. In the final game, Clijsters double-faulted to end the match, 5-2, and the Smash claimed the 21-16 victory – and a spot on top of the standings.

“They’re our anchor for a reason because we know they’re just really solid at the end,” Sloane said of the women’s doubles duo. “They play great together, and it’s nice to have two people that have really kind of connected. Obviously, they haven’t played much together in the past, but it’s nice they’ve been able to jump into it, connect and support each other.”

Chicago and third-place Orlando – which trails the Smash by two matches – are the hottest teams in the WTT, winners of three consecutive matches. With five days remaining on the schedule, Chicago and Philadelphia are vying for the top playoff spot. The Smash’s final four opponents are a combined 19-23, while the Freedoms’ opponents are 21-21.

The Smash, playing their third of four consecutive matches, face Vegas at 3 p.m. ET Sunday on the Tennis Channel. Chicago topped the Rollers, 24-18, on July 12, winning the men’s and women’s singles and mixed doubles matches. Vegas won the women’s doubles and pushed the men’s doubles match to extra play.