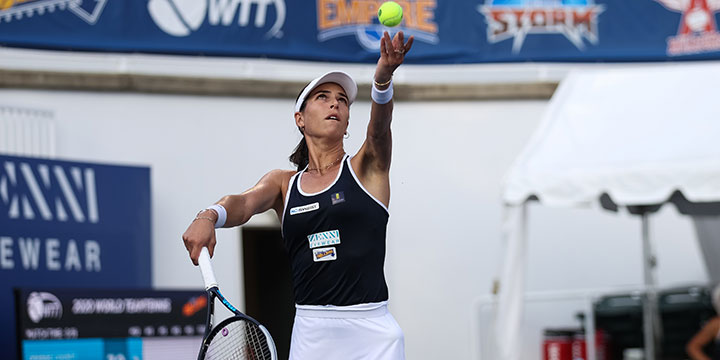 Lyrical sensation Rihanna has a unique ability to belt out an EDM-style song, croon some R&B, or as they say, spit lyrics on a rap song.

The adaptability she has with her undeterred vocal skills has been dang near unmatched this century.

The Barbadian singer/songwriter’s got game.

The 27-year-old Croatian-born Australian has been at The Greenbrier for less than a week, and her array of skills have shined brightly during an otherwise dim week for an injury-plagued Vegas Rollers team that has lost three straight and is 1-3 since her arrival.

“We obviously had our issues and things were starting to slide, and unfortunately it’s still because we’re kind of lacking a few of the pieces, like a chess match,” Rollers coach Tim Blenkiron said. “She was a major addition. She’s come in and played really well, competed her backside off and everyone has kind of taken notice, so it’s been great.”

The four-time WTA finalist played three impressive sets in her debut during a 21-19 win against Orange County on Tuesday, three grueling sets against first-place Philadelphia on Wednesday, and two each in losses against Orlando and New York on Thursday and Friday, respectively.

“For me, it really was a no-brainer to come and play, I was really happy to get the opportunity,” said Tomljanović, who started playing tennis at 7 years old. “And when I heard the team I was on I was really excited because I knew most of the players.”

“I won’t lie, I was pretty nervous for my first match, but luckily the good thing it was with Bob (Bryan), so I got that out of the way,” Tomljanović said. “I loosened up a little bit and it’s been really fun, a lot different than I’m used to when you’re playing for yourself. It’s just really cool to get into that team spirit.”

Tomljanović said she’s always tuned in for the WTT season and liked to follow the three-week marathon, adding she’s always known at some point in her career she would take the time to commit and experience the team-aspect. She hadn’t been able to up to this point because she generally spends a good portion of July doing off-court training.

When the coronavirus pandemic shut sports down, her calendar opened up.

And the Rollers have benefitted.

“The tough thing with team tennis is jumping in,” Blenkiron said. “It’s quick (and) if you get off to a bad start it’s tough to recover so you really have to be ready to go from the first ball, and you have to do a good job of concentrating from ball to ball and I think that’s what she’s really, really done well. From point to point, she’s kind of been locked in.

“She’s just so solid physically and mentally, performance-wise. You always kind of know what you’re gonna get. You love having those kind of players. She brought a needed lift.”

She’s also brought a winning nature that started during her junior career and has translated into a promising future.

Tomljanović, who is still chasing her goal of winning a Grand Slam title, bears the competitiveness that produces championships. She won four titles on the ITF circuit and won the 2009 Australian Open Girls’ Doubles title with San Diego Aviators star Christina McHale.

Now she’s hoping to spark some life into an incredibly talented Rollers team that needs a boost heading into Sunday’s match against the Chicago Storm.

If you look closely over the final week of the WTT campaign, based on her first week of play, there’ll be a diamond shining brightly for the Vegas Rollers.