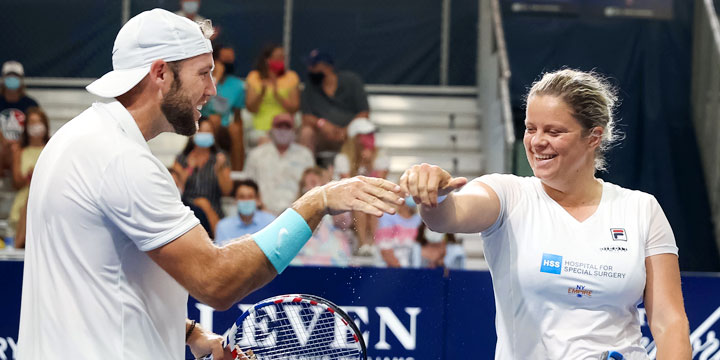 There’s something to be said about having a Hall of Fame tennis player on your World Team Tennis roster.

With his team clinging to 16-12 lead Friday, and Olympic gold medalist Monica Puig rallying the Vegas Rollers, Jensen said he had no choice but to turn to the star of his team.

Former No. 1 singles and doubles player Kim Clijsters replaced Sabine Lisicki, then turned away a 4-1 deficit against Puig to sustain momentum with a 5-4 set-victory to spark the Empire to a 25-17 victory over Vegas.

“I can only coach for today,” Jensen said. “I can’t worry about tomorrow, I can’t worry about playoffs. I gotta see the situation and call every battle plan that we have and every resource and she’s the best we got. I got the best player in the world in my opinion, in the women’s tennis, just sitting on the sideline, ‘I need a game, I need you to come in.’ She’s in the Tennis Hall of Fame.”


#WTT2020: @GuaranteedRate Player of the Match @Clijsterskim chatted with @NickGismondi after @NYEmpireTennis swept 🧹 the @VegasRollersWTT, 25-17. She talks about being subbed in down 3-1 in women's singles and coming back to win, the team she wouldn't trade for the 🌎 and more! pic.twitter.com/hm788sxIoB

Clijsters, who has become quite a storyline for New York (5-4) this season, added another impressive chapter to her WTT campaign by going 3-0 against Vegas, also winning in women’s doubles and mixed doubles.

Just when the Rollers were on the brink of seizing momentum after Puig took a commanding 4-1 lead in women’s singles, Clijsters showed why she was a 2017 inductee into the Tennis Hall of Fame by winning three straight games to tie the set at 4-all. She then patiently chipped away at Puig en route to a 5-3 tiebreak victory, while giving New York a 20-13 lead in the match.

“I had to get my mind and my body ready for it again,” said Clijsters, a four-time Grand Slam singles champion who has won 41 singles titles and 11 doubles titles on the WTA Tour. “I think once you get put in that position you just go try to play point by point. Some easy mistakes in that first game, but I was able to work my way into that short set and grind it out for the team.”

Jensen said Clijsters has done a good job at leaving her trophy case of accomplishments outside The Greenbrier bubble and has blended in nicely with her teammates.

“She’s constantly including everybody, she’s a glue person,” Jensen said. “You need someone who’s a uniter. She’s not bigger than the room. She’s truly an extraordinary human being that happens to be an extraordinary tennis player.”

Which she showed after New York’s Jack Sock was able to take advantage in men’s singles when he broke Sam Querrey’s serve in the seventh game on a deciding point and went on to give New York a 5-3 lead in the match.

It didn’t take long for the veteran women’s doubles tandem of Clijsters and Kveta Peschke to establish their presence, as they broke Puig’s serve at love, and opened a 2-0 lead. Puig and Ajla Tomljanović battled back to win the next two games, but that would be it for the Rollers tandem, as Clijsters and Peschke dominated over the last three games, breaking serve in two of them and winning the set, 5-2.

In what might have been the best set of the match, all due respect to the women’s singles thriller, Clijsters and Sock outplayed Tomljanović and Mike Bryan after getting to sudden death of a nine-point tiebreak.

After everyone held serve over the first eight games, New York opened a 3-1 lead in the tiebreak, Vegas (4-7) battled back to tie it at 3-all and then 4-all. After a stellar rally, Clijsters hit a vicious shot that challenged Bryan down the line and was followed by a fist pump, as the Empire took the set and opened up a 15-9 lead in the match.

After each team held serve in men’s doubles, Sock and Neal Skupski and Vegas’ Mike and Bob Bryan went to the tiebreak, where the Empire tandem closed things out to seal the set and match.

“We have an awesome team,” Clijsters said. “We have a lot of fun together, we work hard, we train together, there’s a good vibe within the team and I wouldn’t want to swap to be on another team.”

Clijsters has been playing through an abdominal injury, which is why Peschke served first for the Empire in women’s doubles. Prior to New York’s previous match, against San Diego on Wednesday, there was a thought Clijsters was going to serve underhand to avoid further irritating the injury. Thursday’s off-day appeared to help, as Clijsters’ first serve of the day was 95 miles per hour. Jensen said he’s been careful with Clijsters’ load management and doesn’t necessarily want to use her in all three events, but the Hall of Famer said she’s utilized off days to rehab and recover her stomach muscle.

Querrey and Sock met for just the second time in their careers. The first was an epic showdown in 2015, when Sock won his first ATP World Tour title, knocking off eighth-seeded Querrey 7-6(9), 7-6(2) in the Fayez Sarofim & Co. U.S. Men’s Clay Court Championship final.

Vegas will face the Chicago Smash on Sunday at 3 pm ET/12 pm PT, with the match being broadcast on the Tennis Channel. The Empire return to action on Saturday, when they’ll face the Smash at 7 pm ET/4 pm PT on ESPN +