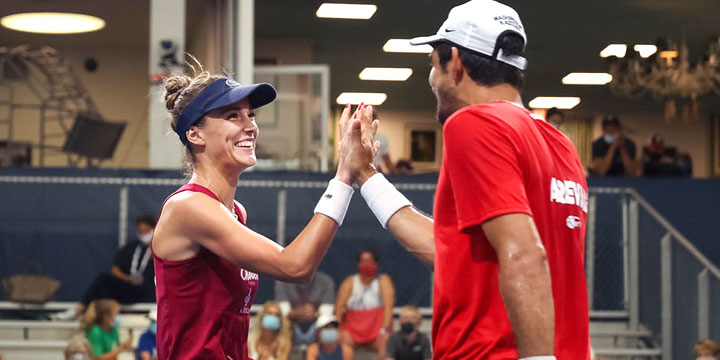 The Washington Kastles moved back to .500 on the season, dominating the Orange County Breakers 25-11 indoors at The Greenbrier in what is the largest margin of victory for a team so far this season.

Bernarda Pera earned her second consecutive win over a top-80 player in the world, taking down Jennifer Brady 5-1 to set the tone early for the Kastles. The lefty won 10 of 12 return points on Brady’s second serve and converted three of her five break point chances.

ORANGE COUNTY BREAKERS vs. WASHINGTON KASTLES MATCH STATS
After falling to Steve Johnson 6-7(2) 4-6 a few weeks ago at the DraftKings All-American Team Cup in Atlanta, Tommy Paul exacted his revenge on his fellow American with a 5-2 win to give the Kastles a 10-3 lead. The 2015 French Open boys’ singles champion did not face a break point on his serve and broke Johnson’s serve twice, to begin the set and to close out the set.

The Guaranteed Rate Player of the Match Pera continued her great play in mixed doubles with Marcelo Arevalo, with the duo erasing an early break deficit for a 5-3 win over Gaby Dabrowski and Austin Krajicek, extending the lead for Washington to 15-6 entering halftime.

“He [Marcelo] brings a lot of energy and I think we make a great team on the court,” Pera said. “We get along well on and off the court and that is what helps a lot. I like the team play and the team spirit.”

Williams and Rodionova dug out of a 1-3 deficit and won a critical deciding point at 3-3 to storm back and eventually win 5-1 in the tiebreaker over Orange County’s star-studded women’s doubles team.

Three former college standouts finished off the evening in men’s doubles, with Nick Monroe of North Carolina and Arevalo of Tulsa battling Krajicek of Texas A&M and Luke Bambridge. The Kastles continued their stellar play, earning a 5-1 win as a result of winning all eight of their first serve points and saving the two break points they faced.

Washington won both deciding points in the match and did not call a single Geico timeout for the first time this season.

The Breakers (3-6) will look to bounce back Friday at noon PT against the first-place Philadelphia Freedoms (7-1), with the match televised live on the Tennis Channel. The Kastles (4-4) will follow up the Breakers-Freedoms match at 4pm PT and look to extend their momentum against the second-place Chicago Smash (6-2). The match will be televised live on ESPN 2.