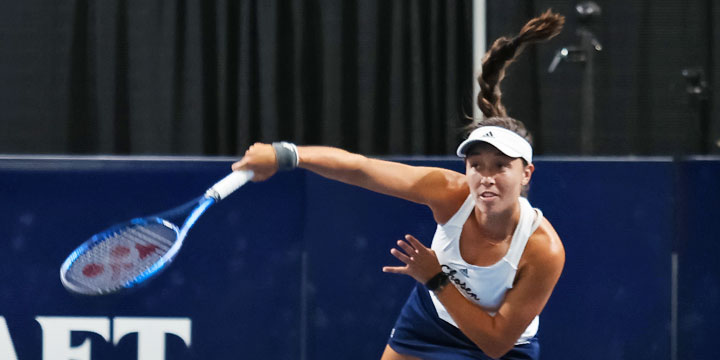 When Orlando lost 24-15 to the Vegas Rollers in the first meeting of the season, Jessica Pegula played in just one set for the Storm, a women’s doubles loss.

Thursday the teams met in a critical rematch, and Pegula was prepared.

The 26-year-old from Buffalo went 2-1 in the middle three sets to lead Orlando (5-4) to a 22-16 revenge win over the Rollers (4-6) and for her efforts took home Guaranteed Rate Player of the Match honors.

“I’ll go back to the second set of the women’s singles,” Orlando coach Jay Gooding said. “We were down 3-1 in that one and turned that around. That helped with the momentum in my mind. That was massive.”


“Sorry, my team is harassing me…” 😂@JLPegula breaks down the @OrlandoStormWTT's successful day as the Player of the Match in @WorldTeamTennis. #WTT2020 pic.twitter.com/PijER0Y77S

Tennys Sandgren opened the match with an impressive win over hard-hitting Sam Querrey, 5-3. The two held serve through the first six games before Sandgren was able to break Querrey in the seventh and serve out in the eighth.

Tomljanović then came out strong in women’s singles and took three straight games for the 3-1 lead against Pegula. Tomljanović led 4-3 with the serve and a deciding point, but Pegula held strong during a tough rally to get the point to tie it at 4-all and force a tiebreak.

With the tiebreak knotted at 3, Tomljanović had the final three serves but double-faulted on the first and shot an unforced error into the net to give Pegula the set, 5-4.

In mixed doubles, Puig recaptured her game after struggling the previous two nights. The 2016 Olympic gold medalist missed two matches with an ab injury, then lost in women’s doubles on Tuesday and Wednesday. Thursday she looked back on her game and plenty healthy in teaming with Mike Bryan to get Vegas back in the match with a 5-2 victory over Pegula and Skupski.

With the match tied 12-12, Gooding said he wanted Jurak and Pegula to keep things close so they could send momentum into men’s doubles.

But it was a couple of unforced errors by the Rollers that helped Orlando dominate women’s doubles in a 5-1 win.

Both Puig and Tomljanović made mistakes on what seemed to be easy shots that could have swung momentum in back-to-back games. But rather than keeping the match close, an error on an overhand smash at the net by Puig allowed the Storm to break Tomljanović’s serve and go up 3-1. Then it was Tomljanović failing at the net and allowing Pegula to hold serve and extend the lead to 4-1 before sealing the set win.

“I think (we’ve been) just figuring each other out, learning how to play a little bit better,” Pegula said, about teaming with Jurak this season. “She’s playing better and better every match. We knew we had to come out and try to get a little lead and help the men and we did, and it worked, and they played great.”

After both men’s doubles teams held serve in the first six games, the Storm broke Mike Bryan’s serve and finished off the match strong by taking the set, 5-3.

Querrey, who ranks eighth all time on the ATP tour with 8,267 aces, came into the day averaging 4.67 aces per set through the first nine matches. He had registered a season-high 6 aces in three sets this season, and a season-low three just once. Against Sandgren he had only one ace.

Sandgren, who has a knack for covering ground horizontally at the back of the court, was able to thwart most of Querrey’s efforts. Querrey has generally been named the Chosen Foods Mover of the Match during the season, but Sandgren covered more ground during the set, 1,344 feet to 1,260.

Tomljanović – who arrived at The Greenbrier on Monday night, made her World Team Tennis on Tuesday night, and played again on Wednesday night – got a bit of reprieve Thursday with ‘just’ two sets for the Rollers. The 27-year-old Croatian-born Australian has played eight sets over three consecutive days, three vs. Orange County, three vs. Philadelphia and two vs. Orlando.

Vegas will face the New York Empire on Friday at 11 am ET/8 am PT, with the match being broadcast on ESPN+. The Storm return to action on Saturday, when they’ll face the Philadelphia Freedoms at 9 am ET/6 am PT on Facebook.