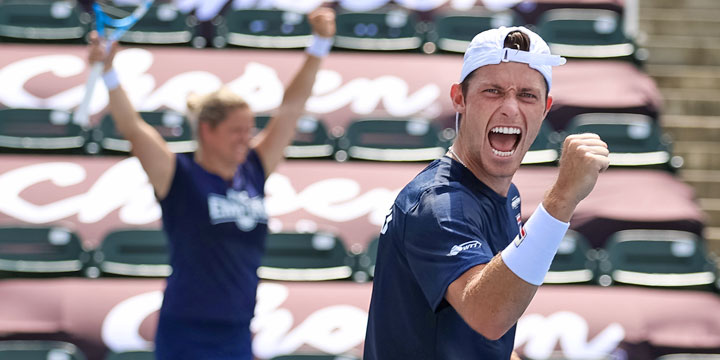 It was quite a day for Jack Sock who won three sets to lead the New York Empire to a heart-stopping 20-19 win in a Supertiebreaker over the San Diego Aviators in World TeamTennis action at The Greenbrier.

With the thrilling one-point victory, which took two hours and 27 minutes, the Empire improve their season record to 4-4, while San Diego drops to 3-5.

SAN DIEGO AVIATORS VS. NEW YORK EMPIRE MATCH STATS
The Empire took an early lead to open the match on a bright, sunny morning as Sock and Kim Clijsters combined for a 5-2 win in mixed doubles over Ryan Harrison and CoCo Vandeweghe of the Aviators.

Serving at 1-2, Vandeweghe could not hold a 40-0 lead and New York broke serve when Clijsters nailed an unreturnable cross court forehand service return on the deciding 3-3 point.

The lone service break was all the Empire needed to finish the set in 18 minutes as Clijsters served out the set at 4-2.

The Aviators came back to tie the match at 7-7 when Vandeweghe and Nicole Melichar took 23 minutes to overcame Clijsters and former Wimbledon finalist Sabine Lisicki 5-2 in women’s doubles.

With San Diego holding a 3-2 lead, Vandeweghe slammed an overhead winner to gain a breakpoint on Lisicki’s serve. The Aviators converted the breakpoint for a 4-2 lead in the set when Clijsters sent a crosscourt backhand long at 30-40.

In the next game, the 5-foot-11-inch Melichar quickly served out the set with an impressive love service hold. With the victory over Clijsters and Lisicki, Vandeweghe and Melichar improved their record in women’s doubles to 7-1 this season.

The Empire regained the lead in men’s singles as Sock came through with a late service break in men’s singles to get past Harrison 5-3 in 27 minutes. Harrison served to stay in the set at 3-4, but dropped serve and the set when his forehand landed past the baseline.

The Aviators went into halftime trailing the Empire 12-10

Christina McHale gave the Aviators the lead for the first time in the match at 15-14 as she won women’s singles 5-2. McHale had broken Lisicki for a 3-1 lead when the Empire put in Clijsters as a replacement for the 30-year-old German.

McHale continued her solid play from the baseline and proceeded to hold serve twice to wrap up the set over Clijsters in 31 minutes.

In the final set of the match, men’s doubles took center stage for a thrilling finish as Sock, playing his third set of the day, teamed with Neal Skupski to play former US Open quarterfinalists Ryan Harrison and his younger brother Christian Harrison, a last minute substitution for Jonny O’Mara.

After overcoming an early service break, Sock and Skupski remained on serve to force a tiebreak at 4-4 with the Empire trailing the Aviators 19-18.

Sock and Skupski captured the tiebreak to win the men’s doubles set 5-4 and send the match to a deciding Supertiebreaker at 19-19.

Once again, Sock came though for the Empires as he won both of his service points to start the Supertiebreaker. New York later took a 6-4 lead with Christian Harrison serving to keep the Aviators in the match.

After Skupski hit a backhand in the net to make it 6-5, New York closed out the match at 7-5 in the Supertiebreaker when Christian Harrison netted a forehand.

“We came out firing. We got off to a great start. Overall, it was a great team effort. I was very happy with the way I played today. It came down to a crazy finish there at the end. We played some good tennis, but we were lucky enough to get through,” Sock said after the match.

“I love the team atmosphere. I’m just happy we got the win. Our goal is to make the playoffs and to go beyond that,” Sock added. “Every match counts. Every game counts. Our motto is, ‘Every point, every game, we’re fighting to the end.’”

#WTT2020: @nyempiretennis coach @LukeBJensen sat down with @NickGismondi ahead of today's match vs. the @SDAviators to talk about @ClijstersKim’s recent absence from the lineup and what adjustments the Hall of Famer has made to her game so she can continue to compete! #TheNatural pic.twitter.com/HIVrdA3ftG

Aviators fans had the opportunity to watch former World No. 1 Kim Clijsters in World TeamTennis action as San Diego went up against the New York Empire. The 37-year-old Belgian is unbeaten in Women’s Singles this season, winning five straight matches, including wins over Sofia Kenin of Philadelphia, Danielle Collins of Orlando and Sloane Stephens of Chicago.

Longtime San Diego tennis fans may remember when Clijsters competed in the high-level WTA tournament which was played at what is now the Omni La Costa Resort & Spa in Carlsbad, Calif. The home of the Aviators hosted the WTA event for more than 20 years from 1991 to 2014.

Clijsters became a crowd favorite at the tournament and fans would routinely fill the 6,500 seat stadium to watch her matches. But it was what Clijsters did off the court that would forever endear her with local tennis fans.

In 2006, while Clijsters was playing the event in Carlsbad, she attended a charity dinner and auction in conjunction with the tournament to benefit a local breast cancer care center. She donated two racquets and two half-hour clinics, which were auctioned off for $30,000.

The Aviators will play their sixth match in the last seven days when they meet the two-time defending WTT champion Springfield Lasers at The Greenbrier on Thursday at 11 a.m. ET/8 a.m. PT. San Diego will be the designated Home Team.

The Lasers field a strong team of seasoned tennis veterans and young World TeamTennis newcomers. Their roster includes Americans Hayley Carter and Catherine McNally who made their WTT debut this season and 26-year-old Mitchell Krueger, a second year WTT competitor. Springfield also features 31-year-old Olga Govortsova, a past member of the Belarus Fed Cup and Olympic teams, and doubles specialists Robert Lindstedt of Sweden and Jean-Julien Rojer of the Netherlands.

Thursday’s match against the Lasers will be televised on ESPN+.