Philadelphia Keeps on Rolling; Kenin, Fritz Too Much for Vegas 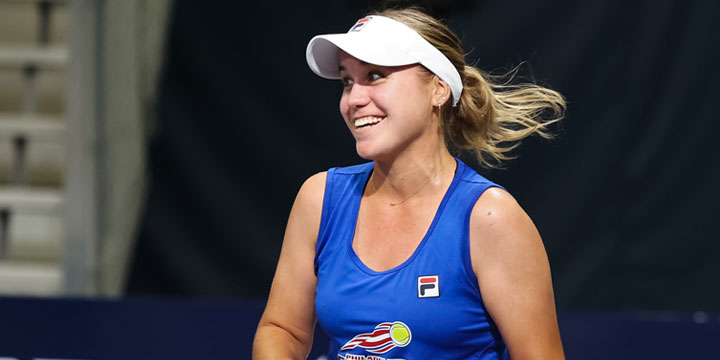 It looked as though the story would remain the same for Philadelphia. Continue to build a lead throughout the match, drop the final set and win in Extended Play.

With the scene looking similar to the past four matches, Philadelphia’s Taylor Fritz changed the script by fighting off the final three serves from Vegas veteran Sam Querrey to win the tiebreak 5-4 and give Philadelphia the 25-16 victory.

The win raised Philadelphia’s record to 7-1 and keeps the Freedoms alone in first place with Chicago nipping at their heels at 6-2 although Philadelphia currently owns the tiebreak if needed.

Serving as the ‘home’ team for this match gave Philadelphia coach Craig Kardon the ability to set the line-up. With the most prominent men’s doubles team in history on the Vegas sideline, Kardon elected to send his duo of Donald Young and Fabrice Martin out first against Bob Bryan and Mike Bryan, the holder of 16 Grand Salm doubles titles.

Serve would be held the first four games of the match would be decided by a tiebreak. Philadelphia would take a 2-1 lead before getting a mini-break after breaking Bob Bryan’s second serve to take a 3-1 lead. Vegas would get the break back to slice the deficit to 4-2 but the Freedoms quickly ended the set breaking Mike Bryan on his first serve to get the 5-2 win in the break and the 5-4 win in the first set.

With women’s singles up next, Sofia Kenin picked up where she left off and jumped out to an early 3-0 lead over Ajla Tomljanovic, who was an injury substitute for Asia Muhammad. Tomljanovic, who has been playing well since her arrival early this week got on the board to slice the deficit to 3-1.

With severe weather on the way, the match was stopped and shifted from the outdoor court to the indoor court at The Greenbrier. Since WTT started this was the first time the Freedoms had to go inside.

It did not seem to faze Kenin at first with the first-year WTT player winning her serve to take a 4-1 advantage in the set and extend her team’s lead to 9-5. The unfamiliarity with the indoor court began to show as Tomljanovic won the next two games to slice the deficit to 4-3. Kenin found her groove breaking Tomljanovic with a love game to take the set 5-3 and give Philadelphia the 10-7 lead.

“I was concerned a little when we moved inside only because we have not played on that court yet,” said Kenin following the match. “I was able to find a little groove and stick to my guns. As expected Ajla picked up her game but I was able to pull out the win for my team.”

As they have done most of the season, the Freedoms consolidated the early lead and continued to put space between them and their opponent along with winning sets that went into a tiebreak.

Tonight, it was Martin and Taylor Townsend getting the job done in mixed doubles defeating Tomljanovic and Bob Bryan 5-4 before the women’s doubles combination of Caroline Dolehide and Kenin provided the cushion heading into the final set registering a 5-1 win over Monica Puig and Tomljanovic.

Kenin and Fritz remain almost perfect for the season with each raising their record to 7-1 in women’s and men’s singles, respectively.