Chicago Rallies Past Springfield Thanks to Bouchard and Mattek-Sands 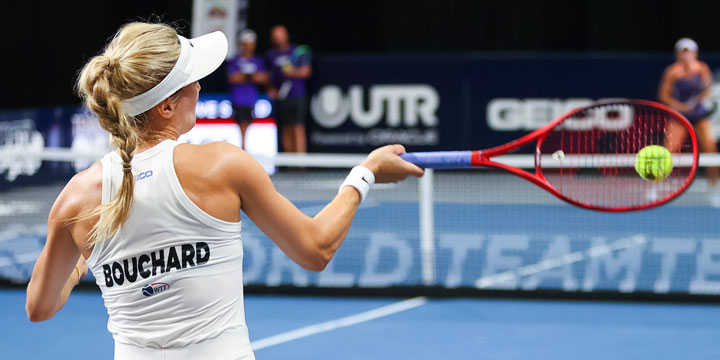 Only two scores were close between the Springfield Lasers and Chicago Smash. That worked out very well for the new team from the Windy City.

The expansion Smash worked for a 5-3 mixed doubles win in the final set of the match to capture an 18-15 win over the two-time defending WTT champion Lasers at The Greenbrier. Three of the first four sets were decided by 5-1 scores, the other set finished 5-2.


#WTT2020: @GuaranteedRate Player of the Match @geniebouchard chatted with @NickGismondi after a huge performance, going 10-2 in her two set wins, for the @ChicagoSmashWTT's 18-15 win over the Lasers. She talks about how the Smash has come together, playing indoor and more! pic.twitter.com/W4kRHAmZLM

Close matches are not new for the Smash, and they have thrived so far. Chicago is 6-2 and sitting in second place in the WTT standings.

“Through the whole season we’ve been up and we’ve been down and I’ve been the last set a couple of times, and I like it,” Mattek-Sands said. “If it comes down to that I feel comfortable in the pressure. My team is all behind me, and I feel that’s a big thing. I’ve been playing great doubles with both Rajeev and Genie, so it’s been a lot of fun.”

Mattek-Sands and Bouchard had plenty of fun in women’s doubles, dominating McNally and Hayley Carter 5-1. Bouchard had a blast in women’s singles, winning by that same 5-1 score. Olga Govortsova started that set for the Lasers but was subbed out for McNally while trailing 3-0.

Springfield dominated the men’s events, starting with singles. Mitchell Krueger continued his improved play, following up a win against New York’s Jack Sock yesterday with a 5-1 victory over Chicago’s Brandon Nakashima in the first set of the afternoon.

The match was knotted at 6 when Springfield’s Lindstedt and Jean-Julien Rojer rolled to a 5-2 victory against Ram and Evan King. The Lasers didn’t get to enjoy their 11-8 lead in the total score very long. Bouchard pushed Chicago in front with her women’s singles win to set the table for Mattel-Sands and Ram.

“We’re all competitive, let’s be real, we could play monopoly at night and you’re going to see some emotions,” Mattek-Sands said. “I think that’s what makes sports great and that’s why I love tennis. These team events, it’s about that energy and you can really feel it from the bench, you can feel it from (coach Kamau Murray), so it’s been really awesome.”

No rest for the Lasers. They take on the San Diego Aviators at 11 a.m. Eastern Thursday on ESPN+. After a well-earned day off the Smash will square off against the Washington Kastles at 7 p.m. Friday. That match will be broadcast on ESPN2.