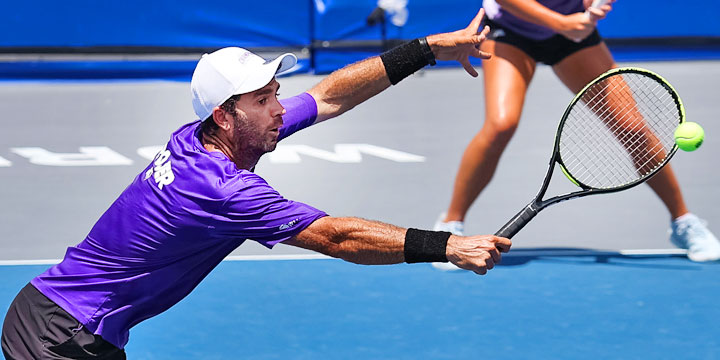 The New York Empire put together an incredible run against the Springfield Lasers Tuesday afternoon. Unfortunately it wasn’t enough to undo an equally incredible match by the two-time defending champions.

The Empire won five straight games, including a run of 13 straight points, to force Extended Play, but the Lasers held on to win 25-17 at The Greenbrier.

New York entered the final set of the match trailing 20-9, but got an early break of Jean-Julien Rojer and built up a 3-1 lead in mixed doubles. Springfield responded, however, breaking Neal Skupski and leveling the score at 4 to force a 9-point tiebreaker.

Kveta Peschke won two of the last three points to give the Empire a 5-4 (5-4) win in mixed doubles and bring on Extended Play. New York won the first three games in the extra session to chip its overall deficit to 24-17. But Rojer steadied the wobbly Lasers by holding serve and ending the match. Springfield is now 2-5 on the season. The Empire falls to 3-4.

Mitchell Krueger got the Lasers off to a great start, upsetting Jack Sock 5-4 (5-4) in men’s singles. The players traded holds to force a 9-point tiebreaker. Sock got a mini-break of Krueger to snag the advantage, but Krueger didn’t falter. He put the pressure on Sock, who sent set point long to give Springfield the early lead.

Hayley Carter and Caty McNally carved up the Empire in women’s doubles, winning 5-1. They opened the set with a break of Peschke and piled up a 4-0 lead. Substitute Hailey Baptiste held serve to get the Empire on the board, but McNally sealed the set with an ace into the left corner. That staked Springfield to a big 10-5 lead after two sets.

Jean-Julien Rojer and Robert Lindstedt kept that momentum going with a 5-2 win over Jack Sock and Neal Skupski in men’s doubles. The Lasers duo broke Skupski to go in front 3-1 at the switch, then both sides held serve the rest of the way. The Lasers got it done at crunch time, winning all three deciding points in the set. The win gave Springfield a comfortable 15-7 lead at halftime.

One day after letting a 3-0 lead slip away against Philadelphia’s Sofia Kenin, Olga Govortsova pulled off an upset of her own. She dug herself an 0-2 hole against New York’s Sabine Lipsicki, winning five straight games, and two deciding points, to take the set. That pushed Springfield’s lead to 20-9 heading into the final set.

Deciding points made a big difference for the Lasers as they built up their lead. Springfield held an 8-4 advantage over New York in that category through four games. New York won both deciding points in mixed doubles

The Empire has a quick turnaround, squaring off with the San Diego Aviators at 9 a.m. Eastern tomorrow. That match will be broadcast on ESPN 2. The Lasers also play tomorrow, against the Chicago Smash at 2 p.m. on the Tennis Channel.


Jeff Kessinger is in his sixth season covering the Springfield Lasers and WTT, and 18th as a sportswriter. Follow him on Twitter @JKessingerSGF.