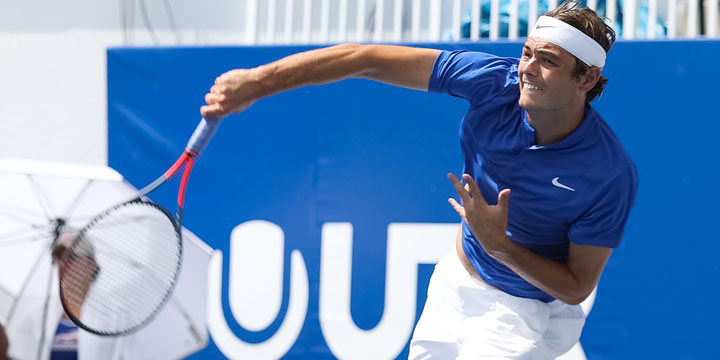 Chicago’s four-match win streak ended with a 23-19 setback to Philadelphia on Tuesday at The Greenbrier.

In a matchup of the top teams in World TeamTennis, the Smash (5-2) won the women’s doubles matchup to force extra play, but the Freedom (6-1) finished off the match to take sole possession of first place.

PHILADELPHIA FREEDOMS vs. CHICAGO SMASH MATCH STATS
Philly opened with a 5-4 win in men’s doubles. The Freedoms duo of Fabrice Martin and Taylor Fritz took a 3-1 lead before holding on to win the tie break, 5-2, against Rajeev Ram and Evan King.

“It’s always great to start playing good and have some wins from the beginning of the season,” Martin, the Guaranteed Rate Player of the Match. “The team is doing good; we’re 6-1 and happy with that.

“During the lockdown, I was in France,” added Martin, a runner-up in the 2019 French Open doubles final. “I knew if I was just sitting on my sofa having wine and cheese and bread that it wasn’t going to work out. I bought some stuff to work out [with] and just watched my diet. I didn’t have any bread – a little bit of wine – but no bread. The bread is key in France, but I stayed away from that.”

Fritz, ranked No. 24 in the ATP, stayed on the court for the men’s singles match. He unleashed a 145-mph ace – the fastest in the tournament – to take a one-game lead and finished the second set by breaking Brandon Nakashima’s serve. After being tied 2-2, Fritz outlasted the 18-year-old first-year WTT player for a 5-3 decision and a 10-7 advantage for Philadelphia.

Mixed doubles was another tightly contested match. The Freedoms tandem of Martin and 24-year-old Taylor Townsend eked out a 5-4 win against ninth-ranked doubles standout Ram and No. 20 Bethanie Mattek-Sands. The match was knotted a 2-2 and 4-4 before Philly extended its lead to 15-11 after capitalizing on Townsend’s serve for set point.

Women’s singles featured Sloane Stephens against Sofia Kenin, who, along with teammate Fritz, entered play with the best singles winning percentages in the league. Kenin, the fourth-ranked player in the WTA, led 3-2 with Stephens serving at 40-40 before breaking for the 4-2 set lead en route to a 5-2 victory.

The Smash trailed 20-13 entering the final match, women’s doubles, and hoped to push the match into extended play and possibly a super tiebreaker.

Chicago’s Mattek-Sands and fifth-year WTT star Genie Bouchard pushed Townsend and Caroline Dolehide to the brink but could not complete the comeback.

“Our team got us ahead from the beginning, so it was a good cushion to begin with,” the 21-year-old Dolehide said. “Taylor and I are playing really well, but I didn’t serve that great. We didn’t play our best in this, but we got through it, and we played a great last game.”

The Smash took the set 5-2 to force extra play, but the Freedoms needed only one game to clinch the victory. Playing in her first WTT season, and trailing 0-1, Dolehide served and then dropped the winning volley down the line to complete the 23-19 win.

– One of Philadelphia’s deciding factors was that it served 16 aces despite the Freedom posting a first-serve of 57%. Chicago placed 67% of its first serves and had five aces.

– Fritz’s 145-mph ace topped his 144-mph rocket from Monday’s match when he had five aces.

The Smash return to the court at 2 p.m. ET Wednesday against the Springfield Lasers (2-5). The Tennis Channel will carry the match from Center Court at Creekside at The Greenbrier.