The WTT Family Grows As Parents Compete In Front of Newborns 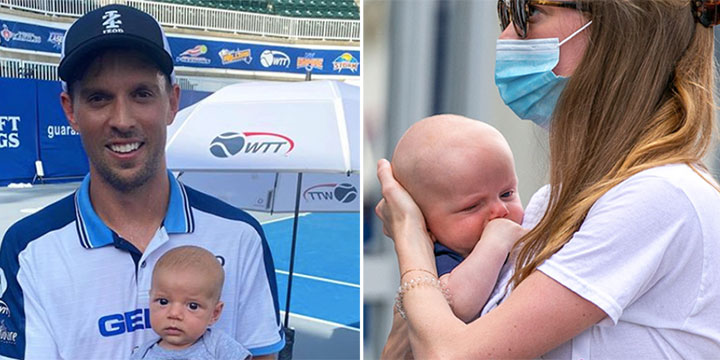 WHITE SULPHUR SPRINGS, W. Va.— The Greenbrier has been overrun by children while their parents duel it out inside Creekside Stadium.

Jake, Ford, Marcelito, Dominic, Jack, Blake and Jada have become part of the World TeamTennis family this season. The age gap between the children is sizable, with Jake the youngest at 12 weeks and Jada the oldest at 12 years.

Jake Bryan took his very first flight to get to West Virginia after enjoying the start of his life settling in at his home in California.

“I was spending a lot of time helping my wife out, changing diapers, late nights, and just spending time with our family,” Jake’s dad Mike Bryan said of quarantine. “We haven’t been home for this amount of time for 22 years. We just got in a routine; woke up every day in the same bed. It was like Groundhog’s Day.”

Now there’s a new routine with a different bed, but little Jake gets to watch his dad compete for the Vegas Rollers while making new tennis friends like Sam Querrey’s five-month-old son Ford.

“They’re pretty cute together,” Querrey said. “It’s nice to have two of us on the team having two little babies.”

For the most part, their children have been mild mannered during take-your-baby-to-work days… when they’ve stayed awake for it.

“I heard him the other day crying,” Querrey said. “He might have been napping today. It’s still his schedule. They can’t come and watch based on me. He’s still young enough where if he needs to nap at noon, he naps at noon.”

Ford is being taken care of by his mom Abby Dixon, while Jake is always alongside Nadia Bryan. Marcelito belongs to Marcelo Arevalo and his wife Lucia Kovarcikova, who is a regular in the stands. It’s literally a family affair as the wives and babies sit together for matches and stroll the grounds for walks and pool trips.

“I don’t know if they were watching because this is his bedtime,” Arevalo said, after his match playing for the Washington Kastles.

The home-away-from-home setup for the young families couldn’t be any better at The Greenbrier, with the hotel room just a five-minute stroller ride away. The children can come watch their parents play a few games and still make a noon bedtime.

“This is obviously a little bit different than a normal tournament where we’d be at a different site and driving to the hotel, so this is nice,” Querrey said. “This is the first tournament we’ve traveled with him and it’s probably the easiest and most convenient setup we could possibly have.”

“I’ve seen a lot of it just being an observant bystander of the American guys and how they’ve traveled,” Johnson said. “But it’s been fun. Sam is one of my closest friends and we flew here with Abby and Ford.”

Mike Bryan is learning as he goes this month, but he’s got a leg up thank to his twin Bob, a father of three young children. His family travels with him often, but isn’t in West Virginia so he’s ready to step in as Uncle Bob.

“Bob was always strapped for time—we’d finish a match and he’d jump in the car and off to the water park or whatever it is,” Mike Bryan said. “Just to juggle all of that, hats off. Luckily I won’t have to do it for many years.”

Soon-to-be father Johnson is open to lending a helping hand.

“I was with them when Sam was playing and I was holding Ford,” Johnson said. “It’s interesting I think five years ago I would have freaked out having a baby in my hands, and now I’m really looking forward to starting a family of my own. That’s the first and most important thing for me going forward this year.”

It’s not just new dads milling around with diapers on their minds. Springfield’s Olga Govortsova has her two-year-old son Dominic with her, while New York’s Kim Clijsters entire family has joined her mid-season.

“It’s got a little bit easier,” Govortsova said. “The first year in 2018 was really tough. The older he gets the easier it is.”

Govortsova gave birth to her son in February 2018 and was competing by April. The 31-year-old is back up in the rankings to No. 135 and won an ITF W100 in February for her first title as a mom.

Clijsters’ children Jada, Blake and Jack arrived a few days ago after the whole family spent a couple of weeks in New Jersey for the Belgian to train for her season for New York Empire. The 37-year-old famously won two of her four Grand Slams after having Jada in 2008 and is in the midst of her second comeback after welcoming Jack in 2013 and Blake in 2016.

If she’s any indication, it certainly seems that being a parent on tour works just fine: Clijsters is a perfect 5-0 in singles so far with wins over Govortsova, Danielle Collins, Sloane Stephens, Sofia Kenin and Bernarda Pera.