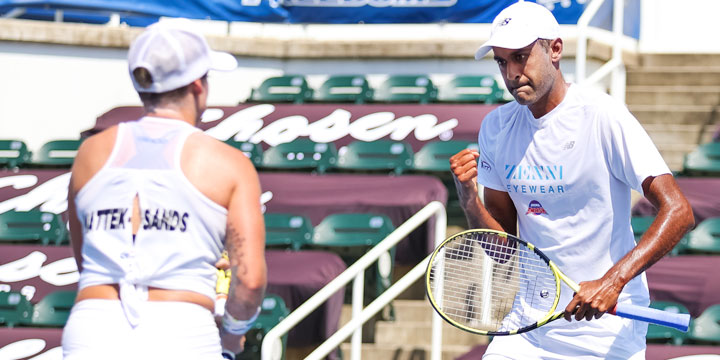 The San Diego Aviators, hoping to win their third World TeamTennis match in a row this season, fell just short in a 20-16 loss to the Chicago Smash, who are tied with the Philadelphia Freedoms for first place the WTT standings with a 5-1 record.

After four sets in the inaugural meeting between the expansion Smash and the Aviators, Chicago held a narrow 15-13 lead heading into the final set of the day.

The men’s singles set between 28-year-old Ryan Harrison and 18-year-old Brandon Nakashima would decide the winner.

#WTT2020: @GuaranteedRate Player of the Match @RajeevRam sat down with @NickGismondi after a 20-16 win for the @ChicagoSmashWTT over the @SDAviators. He talks about being compared to @PeteSampras, bonding with his team and more! pic.twitter.com/By3JKrgGNn

Nakashima, a San Diego resident, scored an early service break and that was all the talented teenager needed as he continued to hold serve throughout the 32-minute set.

Harrison served at 2-4 to stay in the set and took a 40-0 lead only to see Nakashima roar back to tie the game. Harrison held serve after winning the deciding 3-3 point when Nakashima sent a cross court forehand long.

With Chicago leading 19-15 in the match, Nakashima served for the set at 4-3. Harrison forced another deciding point, but this time Nakashima tracked down Harrison’s drop shot and hit an unreturnable backhand to clinch the 5-3 win in men’s singles and secure Chicago’s fifth win of the season.

The match began with mixed doubles in the first set.  Aviators coach John Lloyd initially penciled in Harrison to team with CoCo Vandeweghe, but shortly before play got underway, O’Mara received the nod to pair with Vandeweghe as they faced Rajeev Ram and Bethanie Mattek-Sands of the Smash.

With the score knotted at 1-1 after O’Mara and Ram held their service games, Vandeweghe double faulted twice and on a deciding 3-3 point, her cross court forehand landed in the net to give the Smash a service break and an early 2-1 lead.

In the next game, Mattek-Sands, a former No. 1 ranked doubles player in the world, fought off three break points to consolidate the service break and extend the Smash lead to 3-1.

The Smash continued to pressure the Aviators as they broke O’Mara for a 4-1 advantage as Vandeweghe’s backhand volley at the net on break point landed long.

Ram, the 2020 Australian Open men’s doubles champion, easily held serve in the sixth game to give the Smash a 5-1 mixed doubles victory in 22 minutes.

Stephens and McHale combined for a total of six service breaks in their singles set as they broke each other’s serve three times.

Ultimately, the women’s singles set would be decided in a tiebreak. In the blink of an eye, McHale jumped out to a 3-0 lead. Stephens closed the gap to 3-2, but on the sixth point of the tiebreak her cross court backhand fell into the net to give McHale a 4-2 lead.

After hitting a down the line forehand in the net to make the score 4-3, McHale wrapped up the tiebreak when Stephens drilled a forehand long. The Aviators captured the Women’s Singles set 5-4 in 40 minutes, but still trailed the Smash 9-6.

Chicago extended their lead to 14-8 as Ram and Evan King powered their way past O’Mara and Harrison in Men’s Doubles 5-2 in 27 minutes.

At 1-1, the Smash broke O’Mara when the left-handed King poached and knocked off a forehand volley at the net on break point for a 2-1 lead. King easily held serve in the next game to extend Chicago’s lead to 3-1.

Later at 4-2, O’Mara served to stay in the set and won three of the first four points. But at 40-15 Harrison netted a forehand volley, O’Mara doubles faulted and then missed a down the line forehand wide on a deciding 3-3 point as the Smash now led 14-8 following the win in Men’s Doubles.

Vandeweghe and Nicole Melichar of the Aviators cut Chicago’s lead to 15-13 with an impressive 5-1 victory over Mattek-Sands and Canadian Eugenie Bouchard in Women’s Doubles.

Vandeweghe and Melichar hit excellent service returns as they broke Bouchard’s serve twice in the 28 minute set. At 4-1, Bouchard served to stay in the set, but on break point, Vandeweghe blasted a thunderous overhead smash to close out the set.

When San Diego and the Chicago Smash took to the court for today’s World TeamTennis match, Aviators fans may have been cheering against Genie Bouchard of the Smash. But off the court, the 26-year-old Canadian star deserves a huge round of applause.

Morgan, a resident of Toronto, Canada, who happens to be deaf, was selling the prize package to raise money for new hearing aids. The following day, Morgan received a social media surprise. Bouchard answered the tweet, asking Morgan not to sell the prize package and made a heartfelt offer to get her the hearing aids she needed.

After hearing what Bouchard had done, ProSound, a hearing services company, stepped up and gave Morgan new hearing aids free of charge.
It is kind gestures like these that make tennis such a beautiful sport. Bouchard may have hit one of the best aces of the year.

After a well-deserved day off on Tuesday, the Aviators will take on the New York Empire at The Greenbrier on Wednesday at 6 a.m. (PDT). This will be the only meeting between the two teams this season. New York, the designated Home Team, is led by former No. 1 and four-time Grand Slam singles champion Kim Clijsters of Belgium. Other members of the team include former Wimbledon singles finalist Sabine Lisicki of Germany and American Jack Sock, a former Wimbledon and US Open doubles champion, along with Kveta Peschke of Czech Republic and Neal Skupski of Great Britain.

The Aviators swept the Empire in their two meetings last season, winning their 2019 season opener 23-11 in New York and 22-15 later in the season at the Omni La Costa Resort & Spa in Carlsbad, Calif.

Wednesday’s match will be televised on ESPN2.