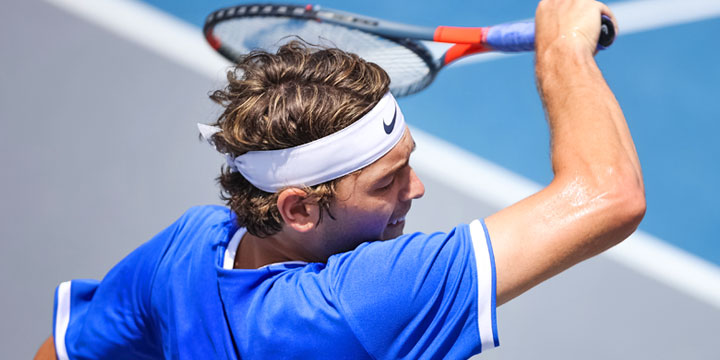 The thermometer hit 90 degrees at The Greenbrier Monday afternoon, That wasn’t nearly as hot as Taylor Fritz’s serve.

Fritz topped 140 on the radar gun with his serve to pick up wins in men’s singles and men’s doubles and help the Philadelphia Freedoms beat the Springfield Lasers 23-17 in extended play.

“The last two months I’ve been training a lot and pressing a lot, so the only thing I was really missing was playing matches and playing these pressure points,” Fritz said. “That’s one of the main reasons I wanted to come here and play World TeamTennis. I thought being in these pressure situations would help me get ready for the main tour when it starts up again. I’m playing well.”

The world’s 24th-ranked player fought off a spirited challenge from Springfield’s Mitchell Krueger in the opening set, 5-3. The second-ranked American on the tour built a 3-1 lead with an early break, but Krueger didn’t falter. He held serve the rest of the way to keep pace, but Fritz and his big serve proved too much to overcome. The 22-year-old hit 140 and 144 mph on the radar gun in the set.

Philadelphia got some breathing room at the halftime break thanks to an impressive 5-1 men’s doubles win by Fritz and Fabrice Martin. They broke Robert Lindstedt’s serve to open the set and never looked back.A hold by Jean-Julien Rojer was all the Lasers could muster as the Freedoms took a 14-9 halftime lead.

Fritz and Martin have made a good pair for coach Craig Kardon and the Freedoms, but they’ve also been able to plug in Donald Young when needed. It’s a similar story on the women’s side, where Caroline Dolehide, Sofia Kenin and Taylor Townsend are solid interchangeable parts.

“We’ve got a lot of players on our team, so not everyone plays every day,” Fritz said. “Or you might not play the event you want to play. But we’ve been really good with just switching it around and nobody has an ego about who should play and who shouldn’t play. That’s been really great. We all just support each other, we go on court and we get the job done.”

Springfield pulled off a thrilling upset in women’s doubles, thanks to inspired play by Haley Carter and Caty McNally. They built a 3-1 lead over Townsend — the 2018  WTT Women’s MVP — and Kenin — the No. 4 player in the world — then had to rally back. Philadelphia changed the tenor of the set with a break of McNally to even things at 3. Kenin and Carter both held serve to set up a 9-point tiebreaker, where a mini break of Kenin helped Springfield win the set 5-4 (5-3).

Kenin pulled off an incredible comeback in women’s singles to win 5-3. Springfield’s Olga Govortosva got an early break, then consolidated it, to take a 3-0 lead, but she wouldn’t win another game. Kenin found a groove and reeled off five straight games, winning a pair of 3-all points along the way, to send the match to the final set with the Freedoms in front 19-12.

The Lasers duo of McNally and Rojer defeated Martin and Townsend 5-3 in mixed doubles to send the match to extended play. But Townsend got the winner at the net in the first game to provide the final score.

Those two 140-MPH aces were just one outstanding part of Fritz’s service game. He finished the match with five aces and just one double fault, winning 93% of his first serve points and 71% of his second serves. Both were match highs.

Philadelphia returns to action Tuesday, facing the Chicago Smash in a showdown of two of WTT’s top teams. The match will start at 3 p.m. Eastern on Tennis Channel. Springfield gets a day off before they take on the Smash at 2 p.m. Wednesday. That match can also be seen on Tennis Channel.