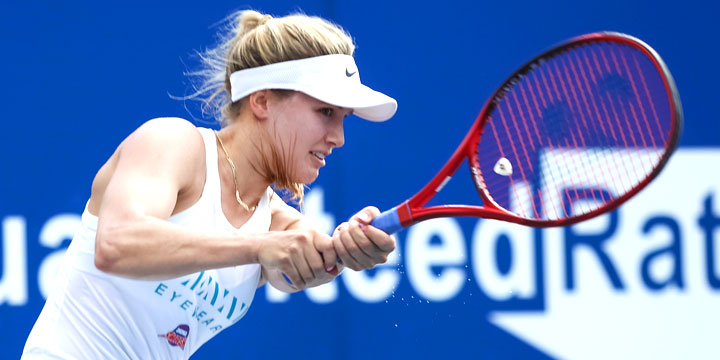 Danielle Collins’ frustration underscored a Sunday of wasted opportunities for the Orlando Storm.

As her return of serve landed wide in the deciding point of her singles match versus the Chicago Smash’s Eugenie Bouchard, Collins fired her racket to the ground. Without delay, she paced over and hammered it three more times onto the hard court. It was the turning point and the perfect picture to sum up Orlando’s 24-19 defeat.

Such a scene seemed unlikely just a few games earlier as Collins was once again having her way with the Smash’s Sloane Stephens. Collins’ 5-0 triumph over Stephens five days earlier was the centerpiece of an Orlando victory. But after Collins took three of the first four games in Sunday’s set, Smash coach Kamau Murray inserted Bouchard in place of Stephens. Collins held serve in the first game after the switch to go up 4-1. But then everything started to turn. Bouchard broke Collins’ serve at 4-2 and then fought off three set points with a couple of forehand winners and a wide return by Collins to push matters to a tiebreaker.

CHICAGO SMASH vs. ORLANDO STORM MATCH STATS
Collins had a pair of set points during the tiebreak but sent two more forehands long to end the set. As Collins’ final return landed out, Bouchard shot her arms up to the sky. Collins sent her racket in the opposite direction.

“I was super nervous first of all because it’s hard to come into the middle of a match cold,” Bouchard said. “I didn’t feel warm at all. My first game, I was terrible; I missed every single return and I was like, ‘Oh, god. The coach is going to regret putting me in now.’ But I warmed up, I got into it, and just super proud with how I just kind of handled the tough moments.”

#WTT2020: @GuaranteedRate Player of the Match @GenieBouchard chatted with @OliviaDekker after a big win for the @ChicagoSmashWTT. She talked about being subbed in to get the women's singles win, playing with @MattekSands, the Smash team dynamic and more! #CHivsORL pic.twitter.com/gUJOw941Hq

Bouchard’s four-game streak gave Chicago a 19-15 advantage heading into the day’s final event: men’s doubles. The Storm had a sliver of a daylight to move back into the match on a deciding point while leading 3-2. But another breakpoint evaded their grasp as Tennys Sandgren shot a forehand beyond the doubles alley. He tossed his racket to the ground and walked away to lean his head against the back wall of the court. Chicago’s Evan King and Rajeev Ram would claim the set on the deciding point of a tiebreak, when King’s second serve was grounded into the net by Sandgren.

What became a dispiriting day began rather promisingly for Orlando. The match opened with Sandgren beating Brandon Nakashima in men’s singles, 5-4 (1). Nakashima was two points away from victory at 4-3 and 30-love, but Sandgren rallied by taking nine of the next 10 points to present Orlando with an early lead.

Chicago bounced back in women’s doubles with Bouchard and Bethanie Mattek-Sands getting past Collins and Jessica Pegula, 5-3. But Orlando also had chances to change the complexion of that set early on. Trailing 1-0 after an opening break, the Storm had three looks to break back at 15-40. But Bouchard, a former Wimbledon finalist, would respond with an ace out wide past Collins, a service winner to Pegula’s backhand, and a forehand rocket that Pegula pushed long.

It was the fourth consecutive win for the team of Bouchard and Mattek-Sands.

She’s such an unbelievable doubles player that I just say, ‘You tell me what to do and I’ll just try to do it,’” Bouchard said of her partner, a nine-time Grand Slam doubles champion. “I just kind of follow orders. I’m just a soldier out there. She’s the mastermind behind it and I just try to keep up with her.”

Mattek-Sands would pocket another win in the day’s middle set, playing alongside Ram to top Pegula and Ken Skupski in mixed doubles, 5-3.

The result moves Chicago into a tie for first place; the Smash and the Philadelphia Freedoms are both 4-1. Orlando are 3-4 and have dropped out of the fourth and final playoff spot.

The WTT season is nearing its halfway point. If the Storm do miss out on the postseason, they will undoubtedly look back on this weekend — Sunday’s loss coupled with Saturday’s match where they squandered the final four games as well as a Supertiebreaker against the Orange County Breakers in a 23-22 heartbreaking defeat — and wonder what could have been.

— Orlando converted just three of 15 break-point chances. Collins went 1-for-7 in that category during her singles match.
— A Tennys Sandgren singles set never lacks drama. Each of his past six singles sets have gone to a tiebreaker, including Friday night’s Supertiebreaker against San Diego’s Ryan Harrison. Sandgren is 4-3 in all tiebreakers this season.
— Collins and Pegula weren’t able to pull out a win over Bouchard and Mattek-Sands, but they had more success than most who have faced the Canadian duo this season. Entering Sunday, opponents had taken two or fewer games from Bouchard and Mattek-Sands in three of their four women’s doubles sets. They have now won 20 of their most recent 28 games together.

The Storm will have an early wake-up call for their next match, a 9 a.m. ET tilt with the Washington Kastles on Tuesday. Washington took care of the Vegas Rollers on Sunday, 24-18, to improve their record to 3-3. Venus Williams and Arina Rodionova accentuated that win by coasting through women’s doubles, 5-1. Tuesday’s match will be broadcast on ESPN 2.