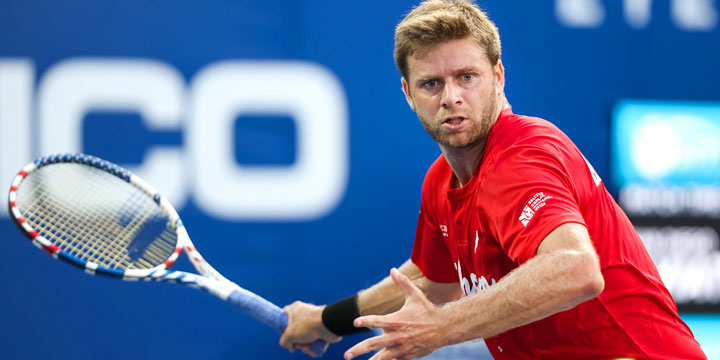 A couple of bagels and a breadstick were dished out Sunday evening at The Greenbrier, with the San Diego Aviators taking down the Orange County Breakers 20-14 for a second win this season over their Southern California rivals.

Guaranteed Rate Player of the Match Ryan Harrison has dropped all four sets he’s played against Steve Johnson in singles at the challenger and tour level, however today the 2017 French Open doubles champion earned a dominant 5-1 win victory over the USC Trojan to begin the match.

SAN DIEGO AVIATORS vs. ORANGE COUNTY BREAKERS MATCH STATS
The key to this set was seen in the 2016 WTT Male MVP’s court coverage and aggressiveness on return of serve, as he won nine of ten points on Johnson’s second serve.

Harrison earned another 5-3 win in a tiebreak, partnering this time around with Brit Jonny O’Mara to defeat Johnson and Krajicek and give the Aviators a 15-9 lead heading into halftime. Both teams won a total of 28 points, as the San Diego duo earned an early break to start the set that was followed by Orange County breaking back later in the set at 2-3.

#WTT2020: @GuaranteedRate Player of the Match @ryanharrison92 sat down with @OliviaDekker after the @SDAviators' 24-18 win over @BreakersTennis. He talks about his three consecutive set wins, team chemistry and more! #SDvsOC pic.twitter.com/8lccRcTZRu

“It was actually easier to be back-to-back-to-back because at that point I didn’t really need to cool off and then restart,” Harrison said. “Two to three-minute breaks and then going again. I felt like I started today really well in the singles and I got good rhythm going, so I was treating it like a normal changeover in a match where I was taking a couple minutes and getting right back out there.”

Former UCLA standout Jennifer Brady turned in one of the best performances seen in the league this season, exchanging powerful groundstrokes throughout several double-digit rallies to win the set 5-0 over Christina McHale. Brady punctuated the momentous win by capturing the fifth consecutive deciding point in the set that ended with a thrilling 37-shot rally.

After earning two huge wins in their last couple of matches, 2017 WTT Female MVP Andreja Klepac and Dabrowski saw their winning streak come to an end at the hands of Nicole Melichar and Vandeweghe. The Aviators duo moved to 4-1 on the season together, dispatching the Canadian-Slovenian duo 5-0 to halt Orange County’s momentum and seal the win.

“We’ve been really doing a good job of moving in the right direction, we’re working on two wins in a row now,” Harrison said. “I think everybody has a good support system for each other so whenever we have one tough set, another area of the team can pick each other up. We’ve just been focusing on a good positive attitude and making sure that we’re always there for each other. I think that momentum will help us get to the finals.”

The Southern California teams both converted break points at the same clip of 43%, however the Aviators had double the amount of opportunities. San Diego won on 6 of their 14 breakpoint chances while Orange County won 3 of their 7 breakpoint opportunities.

Both teams are back in action on Monday, with San Diego looking for their third straight win when they face the red-hot Chicago Smash at noon PT. Orange County will look to rebound at 4 p.m. PT, taking on the New York Empire. Both matches will be televised live on the Tennis Channel.