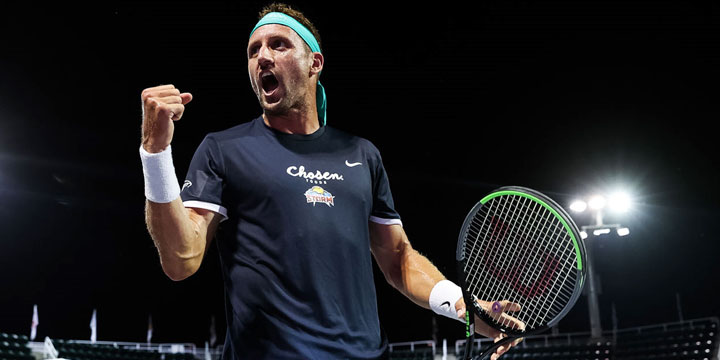 Tennys Sandgren spent the Orlando Storm’s off day on Wednesday embarking on a 13-mile jog on the trails surrounding The Greenbrier.

“I ended up in a creek, where I wasn’t supposed to be,” he said. “I was maybe a little concerned there were some bears, but luckily I made it through.”

ORLANDO STORM 23, SAN DIEGO 21
Sandgren found himself up the proverbial creek at times in his singles match Friday night versus the San Diego Aviators’ Ryan Harrison. With the Storm clinging to an overall lead of 21-18 during the fifth and final set, Sandgren dropped the last regulation game of the set, the resulting tiebreaker and one game of Extended Play, wherein he squandered a match point.

That sent the proceedings to the all-important Supertiebreaker. But with some nifty shots of his own and some errors from Harrison, Sandgren was able to make it through that bear of a matchup and push his team to a 22-21 victory. The win improved Orlando’s record to 3-2 while San Diego fell to 1-3.

#WTT2020: @GuaranteedRate Player of the Match @TennysSandgren chatted with @NickGismondi after a huge Supertiebreaker win for the @OrlandoStormWTT! He talked about the match, his training and more! pic.twitter.com/bQn5R9OU3m

“It was really tough. He played tough in some big moments there, especially on his serve,” Sandgren said of Harrison after the match, steam emitting off his back after a set that lasted nearly 70 minutes. “I think I had a couple looks at some break points to kind of close that match out. He played well and then he played a great [tiebreaker] and sent it into overtime.”

Sandgren did have an opportunity to end the match during the Extended Play game. But that match point went by the boards as Harrison unleashed a 128-mph serve that handcuffed Sandgren’s return.

World TeamTennis had gone without a Supertiebreaker through the first five days of its season. Now, after Chicago Smash and the New York Empire broke that streak on Friday afternoon, Sandgren and Harrison were on the stage for the league’s second first-to-seven, match-deciding overtime.

It began with Sandgren splitting his first two service points. Harrison couldn’t take advantage as he hit a couple of balls long to put Sandgren back on serve with a 3-1 edge.

But Sandgren returned the favors equally with a double fault — his fourth of the set — and an unsuccessful forehand return after nearly being brought to his knees by a deep backhand liner from Harrison.

At 3-3, Harrison scored a winner with a drop shot following a power-heavy rally from both men, but the score was knotted once again when his attempted lob over Sandgren went past the baseline.

Sandgren created some daylight at 4-4 with a service winner and then brought himself a point from victory yet again by smacking a passing shot past the drawn-in Harrison. But the WTT All-Star would not relent; Harrison came back with an ace down the center at 132 mph.

Finally, the curtain fell on this 3-plus-hour match with an 11-shot rally and with Harrison putting a little too much muscle behind a backhand stroke. As the ball traveled out, Sandren let loose a primal scream of exaltation. Harrison was left bent over with his head in his hands.

“It was a tough match,” Sandgren said.

It wasn’t the only one. Directly before the men ended the evening, Harrison and CoCo Vandeweghe outlasted the Storm’s Jessica Pegula and Ken Skupski in a mixed doubles tiebreaker, 5-4 (4). Pegula served the final point, but the return from Vandeweghe was launched wide by a leaping Skupski.

In women’s doubles, Pegula and Darija Jurak handed the team of Vandeweghe and Nicole Melichar their first loss of the season, triumphing 5-3.

Sandgren and Skupski made relatively quick work of Harrison and Jonny O’Mara in men’s doubles, 5-2. And in the opening set of the match, Christina McHale notched a 5-3 victory over Danielle Collins and Pegula, who was subbed into the women’s singles set with Orlando trailing 2-3 and love-30.

— Sandgren recorded three aces during that marathon singles set. The Aviators had five aces as a team Friday.

— The difference for the Storm in knocking off Vandeweghe and Melichar in doubles came on the second serve. Although Pegula and Jurak went just 4-for-8 on second serve points, the San Diego duo went 1-for-5. Those three points equal the set final margin in total points

The Storm will play next at noon ET Saturday against the Orange County Breakers (1-3). The Breakers finally got into the win column Friday with a 25-13 beatdown of the Vegas Rollers. Orange County took all five sets, including a 5-0 shutout in women’s doubles delivered by Gabriela Dabrowski and Andreja Kelpac. The match between the Storm and the Breakers will be broadcast on ESPN 2.