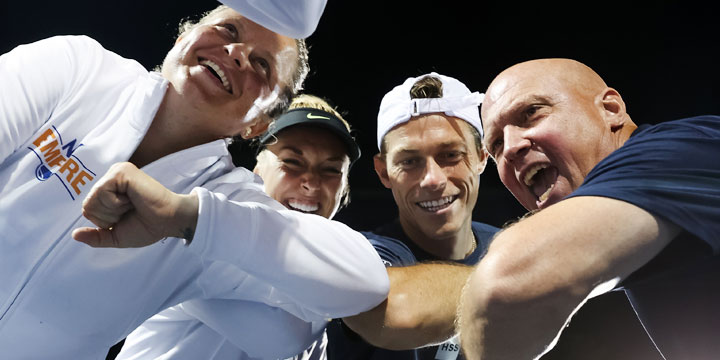 Kim Clijsters is setting the bar pretty high. Her New York Empire teammates are doing their best to keep up, and doing it quite well.

Clijsters’ 5-1 women’s singles win turned the Empire’s match around Saturday night and Jack Sock’s win in men’s singles put the bow on a 21-15 win over the Springfield Lasers at The Greenbrier. Sock said playing on a team raises everyone’s level of play, and that’s especially true of this New York squad.

SPRINGFIELD LASERS vs.NEW YORK EMPIRE MATCH STATS
“Especially when you’re following up Kim Clijsters, the way she’s playing right now,” Sock said with a laugh. “I think I definitely have to do my part as well and try to back up her amazing play this week.”

Clijsters, launching her comeback this summer, is unbeaten in women’s singles. The Hall of Famer looked sharp in turning away Springfield’s Olga Govortsova. She won a deciding point to break Govortsova in the first game, then piled up a 4-0 lead. Govortsova held serve in the fifth game to get on the board, but Clijsters got a hold of her own, punctuating the win with a big smash at the net.


#WTT2020: @GuaranteedRate Player of the Match @JackSock spoke with @NickGismondi after a big singles win to propel the Empire to a 21-15 win over the @SGFLasers. He talks about getting into a rhythm, gelling with the team (including @ClijstersKim), and more! #SPRvsNY pic.twitter.com/Euoa644UXp

“Kim brings the most knowledge, along with our coach, to this team,” Sock said. “Her wisdom, her knowledge out there is amazing. Having her back there in the back of the court with you, pumping you up, is definitely extra special. She’s a legend in the game, but we don’t want to say that yet because she’s still playing, still balling out.”

Sock also balled out Friday night. He rolled to a 5-2 win over Mitchell Krueger to close out the match. Just like Clijsters, Sock raced ahead early. He was up 3-0 and 4-1 before wrapping up the win on a deciding point.

“I’ve been playing almost a week now and when I started I was a little tighter than I am now,” Sock said. “I’m just trying to loosen up a little bit and play my style of tennis, which is relaxed and having fun, but playing big at the same time. Some of the errors were just me letting loose a little bit, then I was able to hit the forehand there on match point better than I did to start the week, for sure.”

The Empire completed a big comeback in mixed doubles to take the early lead. Clijsters and Neal Skupski erased a 2-4 deficit by winning two straight games, then taking the nine-point tiebreaker 5-3. Clijster and Skupski both hit winners in big moments to earn the victory, 5-4.

Youth served up a win for Springfield in women’s doubles. Hayley Carter and Caty McNally rolled past Sabine Lisicki and Kveta Peschke 5-1, getting a pair of early breaks. Springfield’s doubles team has an average age of 21.5; the Empire’s average age is 38.

Men’s doubles was another thrilling set, with New York’s Skupski and Sock taking a 5-3 win over Robert Lindstedt and Jean-Julien Rojer. The teams traded holds until the end. Rojer fell behind 0-40 in his service game, but fought off three set points to get it to a deciding point. Skupski, though, came up with a clever winner to send the Empire into halftime with just a 12-11 deficit.