Freedoms Show Off Roster Depth With Convincing Win Against Kastles 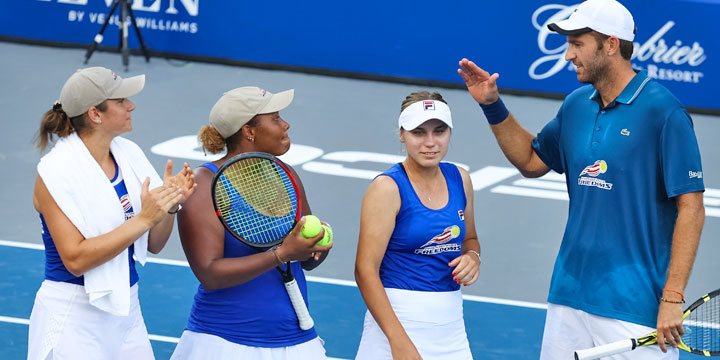 On Saturday, it was the Washington duo of Arevalo and Paul who would team up to defeat Taylor Fritz and Fabrice Martin 5-3 and slice the overall deficit to 21-14 and force Extended Play. Yesterday Martin won his serve to open up Extended Play and today Fritz did the same thing winning four consecutive points to close out the match and keep Philadelphia atop the World Team Tennis standings.

With Philadelphia the designated home team, Kardon was able to select the order of play. Based on what he saw yesterday Kardon started play with men’s and women’s singles and Fritz and Sofia Kenin delivered convincing wins to stake Philadelphia to a 10-3 lead.

#WTT2020: @GuaranteedRate Player of the Match @SofiaKenin chatted with @NickGismondi after an impressive 5-1 win over @VenusesWilliams to talk about what it was like to play the tennis great, how the @PhillyFreedoms reset with a day off and more! pic.twitter.com/uHCJr4SWvH

“Our singles players really opened the door for our doubles players,” said Kardon. “Unfortunately, mixed doubles did not go our way today but that’s ok. We knew we had two more doubles teams behind them, and both the men and women’s doubles team played well.”

“It’s a challenge for both teams when you have to play each other in back-to-back matches,” said Washington coach Robby Ginepri. “Philadelphia is a strong team so it’s not surprising they are in first place. We just have to re-group and get ready to play tomorrow. This team has good energy and are in good spirits.”

One day after Fritz and Paul went to. Tiebreak, Fritz held serve to open the match winning a crucial deciding point and then two games later consolidated his service break by holding serve to take a 3-1 lead en route to the 5-2 win.

Following Fritz, it was Kenin taking the court against former No. 1 Venus Williams in women’s singles. Although she was a bundle of nerves prior to the start, Kenin picked up where she left off and opened up a 3-0 lead on her way to a 5-1 victory.

“It was super exciting,” said Kenin referring to her win. “I was pretty nervous before the match, but I knew I just had to lock in and do what I do best. Venus is a great player, so I just had to shake off the nerves and play.”

With the three doubles matches remaining, Kardon began to show the depth of his roster making changes in both women’s doubles and mixed doubles for today’s match. With Mixed Doubles up first, Philadelphia sent out Taylor Townsend and Donald Young. Although the pair have not played together, they have known each other for many years as Donald Young, Sr. serves as Townsend’s coach.

The match started off 2-2 with Young, Townsend and the Washington duo of Marcelo Arevalo and Bernarda Pera all held serve. Coming out of the changeover, Pera and Arevalo were able to break Young’s serve to take a 3-2 lead. Washington would go on to win the set and slice the lead to 13-8 heading into halftime.

With Women’s doubles up next, Kardon decided to go with the rookie duo of Kenin and Caroline Dolehide. With veteran Townsend leading the cheers from the bench along with words of encouragement, the rookies rolled to a 5-1 lead to give Philadelphia and 18-9 lead and the breathing room they needed and set the stage for Fritz and Martin to close out the victory.

After suffering their only loss of the season against the New York Empire, coach Kardon gave his team the day off the following day. Since then his team bounced back with back-to-back wins over Washington. “The day off was big,” said Kenin. “It allowed us to slow things down and re-focus.
Mover of the match: Fritz was clocked at 1,190 feet and Paul clocked at 1,132 feet.

Philadelphia has a day off before returning to action on Monday afternoon at Noon against Springfield. The match will be televised on The Tennis Channel. Washington returns to the court tomorrow afternoon at 12:15 pm against the Vegas Rollers. That match will be shown on CBS and Facebook.