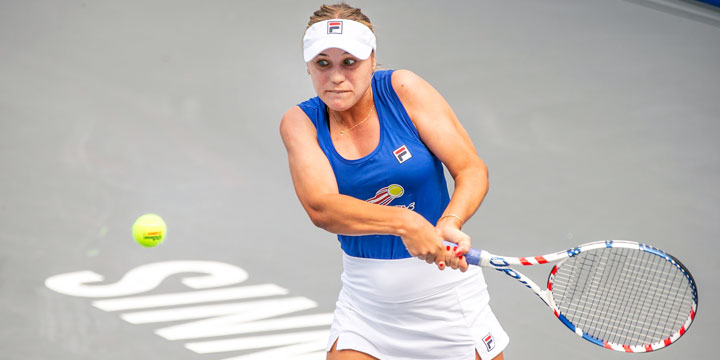 Winning the clutch points is what World TeamTennis is all about. On Friday morning, the Philadelphia Freedoms outlasted the Washington Kastles 25-17 in extended play. Four of the five sets were decided in tiebreakers with the Freedoms winning three of the four tiebreakers. Venus Williams made her 2020 WTT debut as well, playing in the women’s doubles and then as a surprise substitute for Arina Rodionova in the mixed doubles set.

PHILADELPHIA FREEDOMS vs. WASHINGTON KASTLES MATCH STATS
“First of all, it’s just a confidence builder to win those tiebreaks in World TeamTennis especially in the men’s doubles,” said Philadelphia coach Craig Kardon. “I am just super proud of the way everyone competed for every singles point. Every point in World TeamTennis counts.”

“We gave our best effort today and we will give our best effort again tomorrow,” said Washington Kastles coach Robby Ginepri. “Unfortunately, a lot of the deciding points did not go our way, but you can’t lose steam because every day is different.”

Following their 5-4 win in mixed doubles (5-3 in the tiebreak), the Washington Kastles sliced their deficit to 24-17 forcing extended play. In World TeamTennis, if the trailing team wins the final set the match goes into extended play. In extended play, the match continues until the team leading wins one game.

WTT2020: The @PhillyFreedoms, with the help of @GuaranteedRate Player of the Match @SofiaKenin, defeat the @WashKastles 25-17 in Extended Play to kick off Day 6 action at @The_Greenbrier. Get complete #PHLvsWAS match stats at https://t.co/O7jsPZQNd1 #EveryPointCounts pic.twitter.com/xhf9z3cBgk

In the 45-year history of World TeamTennis only the New Jersey Starts were able to rebound from a deficit as large as the Kastles faced. The Stars trailed by six games and won seven consecutive games to win the match.

History would not repeat itself as Philadelphia’s Fabrice Martin started extended play by holding his serve to give the Freedoms the victory. Leading 3-1, Philadelphia’s Taylor Townsend hit a touch drop shot for the deciding point.

Philadelphia’s Taylor Fritz and Washington’s Tommy Paul got the morning action started in thrilling fashion. In the first eight games, both players held their serve with four of the games going to a deciding point. In the tiebreak, it looked as though Paul would pull out the victory grabbing a 4-2 lead. With Fritz holding the last three serves, the WTT rookie showed different pieces in his arsenal before unleashing a 139 MPH Ace to win the breaker and give Philadelphia the 5-4 win.

Next up was woman’s singles featuring Sofia Kenin and Bernarda Pera. Kenin was returning to the court for the first time since losing to former World No. 1  Kim Clijsters Wednesday night while Pera was coming off a 5-2 win over Springfield’s Katy McNally.

Kenin set the tone early winning the deciding point in the opening game on Pera’s serve to take the 1-0 lead. From there it was all Kenin with the No. 4 player in the world displaying the different facets of her game including a drop shot that landed just on Pera’s side of the net to once again break Pera and take a 3-0 lead en route to the 5-0 win.

“Sofia’s win was extremely important,” said Kardon. “Had she not won 5-0 it would have put more pressure on the players behind her. It was key.”

“I wanted to start off strong,” said Kenin. “Kim (Clijsters) played well the other day and I just wanted to bounce back. I am super happy with the win”

Early deficits are nothing new to Washington this season. They faced a 15-11 deficit against San Diego before rallying to win the final two sets and the match.

Facing a six-game deficit, the third set featured women’s doubles and Venus Williams’ first appearance of the year for the Kastles. The 40-year old showed why still competes running down shots on the baseline to her powerful serve and masterful touch at the net.

Washington would gain an early break to take a 2-0 lead but WTT veteran  Townsend and rookie Caroline Dolehide bounced right back to break Arina Rodionova to put the set back on serve eventually going to a tiebreak that would be won by the Freedoms to extend their lead to 15-8.

The Kastles would continue to fight but the deficit proved too big as Philadelphia showed the depth of their roster with Fritz making his appearance in men’s doubles teaming with Martin to pull out a 5-4 win in the morning’s third tiebreak.

“Taylor’s serve is a little bit bigger,” said Kardon. “Men’s doubles can come down to one or two points and I would like to get Taylor in there as much as possible. Donald (Young) can surely play so it’s nothing against him.”

Philadelphia and Washington will square off against each other again Saturday afternoon at 4 p.m. The match will be televised on CBS Sports Network.