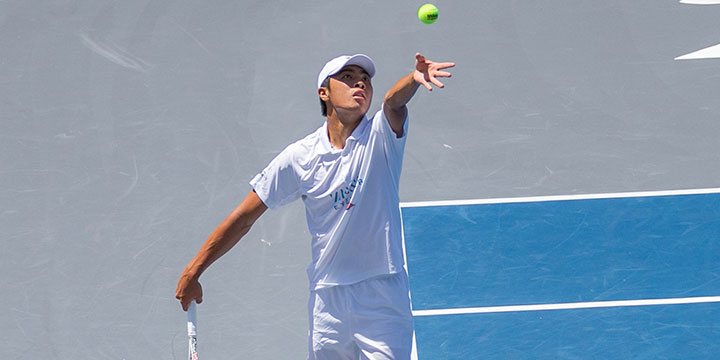 Brandon Nakashima may be the youngest player in World TeamTennis, but he played like a veteran on a sun-drenched Friday at The Greenbrier.

In a matchup of 2-1 teams entering the day’s play as part of a four-way tie atop the WTT standings, Chicago pulled out a 22-21 victory decided in a supertiebreaker won by Nakashima against Jack Sock.

CHICAGO SMASH vs. NEW YORK EMPIRE MATCH STATS
“I knew it was going to be a very tough match,” said Nakashima, who faced Sock earlier this year at Indian Wells before the COVID-19 pandemic shut down the ATP season. “Going into that last set, we were down a couple of games, and I knew I had to win that set and get a few more games after that – and eventually, I got it done.”

#WTT2020: @GuaranteedRate Player of the Match Brandon Nakashima joins @OliviaDekker after an incredible come-from-behind win for the @ChicagoSmashWTT, which he completed in a Supertiebreaker. He talks about his wins so far in WTT, preparing for the match and more! pic.twitter.com/BQRt8h0kJI

In mixed doubles, Chicago’s Rajeev Ram and Bethanie Mattek-Sands lost 5-4 to the Empire duo of Neal Skupski and Kim Clijsters after trading wins during the first eight games. The Smash was up 3-1 during the tiebreaker before New York rallied to score three of the final four points.

The Smash women’s doubles tandem of Bethanie Mattek-Sands and Genie Bouchard swept past New York’s Kveta Peschke and Sabine Lisicki, 5-2. After Chicago went ahead 3-0, including a love-service game from Bouchard, Empire coach Luke Jensen subbed in Clijsters for Peschke. The teams split the final four games as the Smash were down 15-40 in the last game and rallied to take the match and a 9-7 lead.

Nakashima and Rajeev Ram dropped a hard-fought 5-4 decision to Skupski and Sock in men’s doubles. During the 9-point tiebreaker, New York gained a 4-3 advantage on a return lob by Skupski to the backline that fell in, then put away the match when Sock’s returned Ram’s serve and Nakashima hit wide on a return volley. The win pulled New York within 13-12.

The women’s singles match featured U.S. Open champions Sloane Stephens (2017) and Kim Clijsters (2005, 2009-10). The veteran Clijsters was relentless in battling to take the last three games for a 5-2 decision and put the Empire ahead 17-15.

Nakashima, the Guaranteed Rate Player of the Match, returned to the court for the men’s singles match to face Sock, who won the first game to push New York’s lead to 18-15. However, the 18-year-old Nakashima won three consecutive games to knot the score at 18-all.

Sock rebounded with three wins before Nakashima rallied to tie the match at 4-4 (21-19) and force a 9-point tiebreak. After falling behind 4-2, Nakashima scored three points to force extended play with the Smash trailing 21-20.

Sock and Nakashima were 15-15 and 30-30 before the youngster won the final two points to force the super tiebreaker.

Under the rules, if the match is tied after five sets or after extended play, a 13-point super tiebreaker is played. The first to 7 points wins.

Sock won the coin toss to serve first and eventually went up 2-0. Nakashima took three of the next four points for a 3-3 tie. The players were knotted at 5-5 before Nakashima crashed the net for his sixth point. He sealed the match – and the Smash victory – with a backhand into the cross-court to cap the comeback.

Nakashima said he’s picking up more confidence playing with and against the top players, noting that he’s “getting some good results, [and] obviously the strategy and technique with my stokes.

“I think my serve has improved a lot since college; I’m getting a lot more free points. The overall athleticism and maturity have improved in the last couple of months.”

Chicago improved to 3-1, tied with Philadelphia atop the WTT leaderboard.

Chicago tallied a season-high 10 aces against New York and has 15 in the past two matches. The Smash has 26 aces for the season.