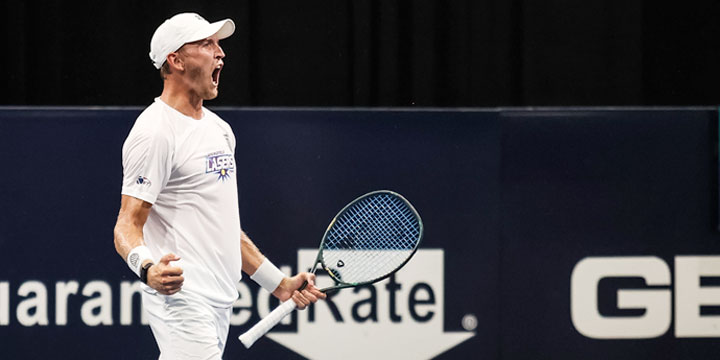 Mitchell Krueger picked a heck of a time to get his first win as a Springfield Laser.

SPRINGFIELD LASERS vs. WASHINGTON KASTLES MATCH STATS
The 26-year-old American outdueled Tommy Paul in a thrilling men’s’ singles set to secure a 20-18 Lasers win over the Washington Kastles Thursday at The Greenbrier. It’s the first victory of the 2020 World TeamTennis season for Springfield and the first loss for the Kastles.

Krueger and Paul traded holds throughout, setting up a 9-point tiebreaker. There Krueger fell behind 2-4, but saved two set points and won the deciding point to claim a 5-4 (5-4) victory.

Washington led most of the afternoon, and Springfield didn’t take its first lead of the match until men’s doubles, the fourth event of the afternoon. Robert Lindstedt and Jean-Julien Rojer were solid in that set, breaking Nick Monroe on their way to a 4-1 lead. Rojer served a love game to wrap up the win, 5-2. That put Springfield in front 15-14 heading into the final set.

Bernarda Pera started off the match strong for Washington. She earned two breaks and took a 4-0 lead before Springfield’s Caty McNally got on the board with a break of her own. The Lasers’ rookie then held serve to get within 4-2, but Pera closed out the set to give the Kastles an early 5-2 edge.

Olga Govortsova was stellar from the backline to help Springfield capture women’s doubles. The WTT veteran hit a pair of winners down the line, then tucked a topspin lob into the back corner on deciding point to wrap up the win. Govortsova and McNally broke Pera twice en route to victory.

A late break tipped mixed doubles in the Kastles’ favor. The teams traded holds to give Washington a 4-3 edge and it looked like the trend was going to continue. But, after falling behind 15-40, Marcelo Arevalo and Arina Rodionova fought off two game points and got an emphatic forehand winner from Rodionova to break McNally and take the set 5-3. The win gave the Kastles a 12-10 edge at the halftime break.

Krueger covered a lot of ground in his win over Paul. He was clocked at 2,542 feet during men’s singles, the highest total of the afternoon. Paul was second, at 2,240 feet. Second serves also proved big for the Lasers. They won 58% of their second-serve points. The Kastles lagged behind at 38%.

The Kastles have a quick turnaround after this match. They face the 2-1 Philadelphia Freedoms tomorrow at 9 a.m. Eastern. That match will be live on CBS Sports Digital and Facebook Watch. The Lasers also play Friday, squaring off with the Vegas Rollers at 3:30 p.m. on ESPN+.