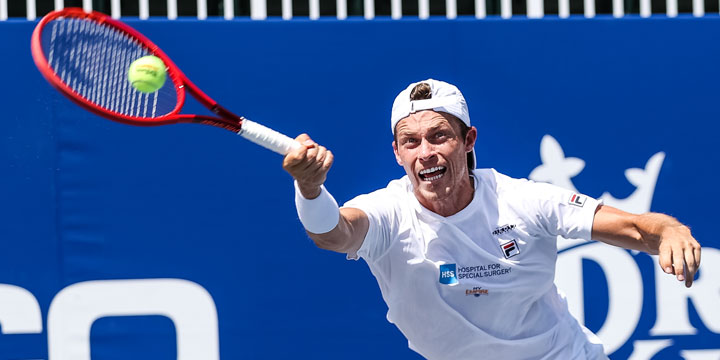 Neal Skupski rendered his teammates and even his own brother speechless Thursday night versus the Orlando Storm.

Skupski’s two outstanding sets spurred the Empire to a 24-16 victory that dropped the Storm’s record to 2-2.

NEW YORK EMPIRE vs. ORLANDO STORM
The 30-year-old Brit put his stamp on the match in the evening’s second set, men’s doubles, where he and Jack Sock took on Tennys Sandgren and Ken Skupski,. After a service hold, Skupski completely owned the second game and broke Orlando’s serve with four winners, including a couple of perfectly placed backhands down the line. He added a couple of unreturnable serves in the third game, finishing that game off with a winning volley right in front of his brother.

As Skupski put away a forehand winner to give New York a 4-1 lead in the set, Sock shrugged his shoulders, waved his right hand down and started to walk away. It might have been a doubles match, but in that moment, the American knew this set was a singular performance by one man. New York would go on to claim the set, 5-2.

Skupski remained on the court for mixed doubles with International Tennis Hall of Famer Kim Clijsters. They raced out to a 4-0 advantage against the elder Skupski and Jessica Pegula thanks to more sterling play from Neal. At set point and up 4-1, Skupski deposited a forehand passing shot past his brother. All Ken could do, like Sock, is just wave at the ball and walk off.

“Obviously, I’ve played Ken a few times in World TeamTennis now. We’ve played together for five, six years, grown up together, so I know his weaknesses; he knows mine,” Neal said. “But today, I played a very good match. Just good that we can get the win for the New York Empire.”

Skupski’s brilliance gave New York a 15-7 lead after three sets, a deficit from which the Storm would never recover. The Empire improved their overall record to 2-1.

However, Orlando did not go lightly. Pegula and Danielle Collins provided the Storm’s first win of the year in women’s doubles with a 5-4 (4) victory over Kveta Peschke and Sabine Lisicki. That triumph combined with Sandgren winning the first three games of men’s singles against Sock in the final set of the night cut New York’s lead to 19-15.

However, Sandgren would go on to lose three of the next four games, including three set points, to extend that set to a tiebreaker, which Sock concluded emphatically with a couple of aces. It was Sandgren’s first singles loss in four WTT matches.

The best set of the contest was the opening act between Collins and Clijsters, where momentum seemed to switch sides with every game. Each player pocketed multiple break points as well as a mini-double break during the nine-point timebreaker. They pushed the set to the limit and at 4-4 in the timebreak, Clijsters clinched the affair with a forehand winner down the line.

— The final margin wasn’t terribly close, but it could have been much worse for Orlando. New York squandered 11 of 18 break-point chances, and the Storm won four of five game-deciding points (not including timebreakers). New York tallied one such point.

The Storm will be playing under the lights again Friday when they take on the San Diego Aviators (1-2). Although the Aviators have lost their past two matches, their women’s doubles team of CoCo Vandeweghe and Nicole Melichar have done their part. They have won each of their three sets this season. That match is scheduled to start at 7 p.m. ET on CBS Sports Network.