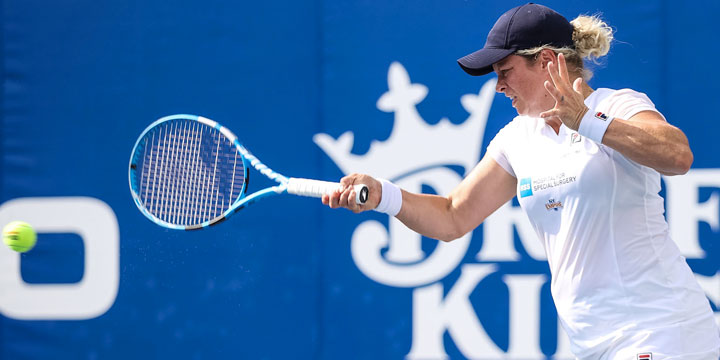 The Philadelphia Freedoms opened the 2020 World TeamTennis season in convincing fashion, losing only one set in their first two matches.

On a hot Wednesday afternoon, the New York Empire reversed the script winning all five sets (the first two coming in tiebreakers) and handing the Freedoms their first loss of the season, 25-17.

NEW YORK EMPIRE vs. PHILADELPHIA FREEDOMS MATCH STATS
“We watched the Freedoms play the past couple of days and realized how good they were,” said Kim Clijsters, who registered wins in singles and mixed doubles with Neal Skupski. “We knew we would be in for a tough battle and we would need to take a step upward.”

The afternoon started with mixed doubles and Fabrice Martin and Taylor Townsend seemed to pick up where they left off on Tuesday night, winning their first two service games without dropping a point to take a 2-1 lead.

Skupski and Clijsters showed their prowess as they would hold serve and the match would be decided in a tiebreak. In the breaker, the set would go to 3-3 before Clijsters came up with 2 big serves to hold serve and close the set out.

#WTT2020: @GuaranteedRate Player of the Match, Hall of Famer @ClijstersKim joins @NickGismondi after a convincing 25-17 win over the formerly undefeated @PhillyFreedoms to chat about the match, @SofiaKenin and more! pic.twitter.com/HC8DCf1zS5

This would be the first time this season Philadelphia would face a deficit after the opening set. The Freedoms would bounce back in the women’s doubles set as Townsend and Caroline Dolehide would even the match at 7-7 and then again at 8-8 after Dolehide held serve to give Philadelphia a 4-3 lead in the set.

New York’s Kveta Peschke would hold serve to even the set at 4-4 and give the Empire the 9-8 overall lead and force the second tiebreak of the day. In the breaker, each player held serve with Peschke holding all three of her serves to give her team the come from behind 5-4 win in the tiebreak and give New York the 10-8 overall lead.

Following the break, a trip down memory lane was taken by the participants in the woman’s singles match with Clijsters taking on Sofia Kenin. Fifteen years ago, Clijsters chaperoned Kenin for the day at the Miami Open.

In a match between two Australian Open champions, it was the veteran who prevailed winning 5-3 and pushing the Empire lead to 20-14.

“Sofia was this cute, adorable girl who was intrigued by the game of tennis,” said Clijsters. “She was entertained and a star in the making. It was great to be able to pass that experience on. I’ve really enjoyed watching her, win the Australian Open but already before that. Just seeing her grow into being a Grand Slam Champion has been nice to see. She’s so young and has so much more to gain.”

Kenin added, “Unfortunately, I didn’t get the win, but she obviously played well. I’m really happy to see her back on the court healthy and playing well. I’m truly happy that she came back. It shows that it doesn’t matter what age you’re at, you always can come back and do what you do best. She’s in great shape and playing really well.”

Facing a six-game deficit when he took in the final discipline of men’s singles, Philadelphia’s Taylor Fritz knew he was in for a battle against Jack Sock. With Fritz leading 3-2, Sock would go on to win the final three games to earn the 5-3 win and close out the New York victory.

The Freedoms return to action on Friday morning at 9 am against the Washington Kastles. The match will be televised on Facebook Watch and CBS Sports Digital