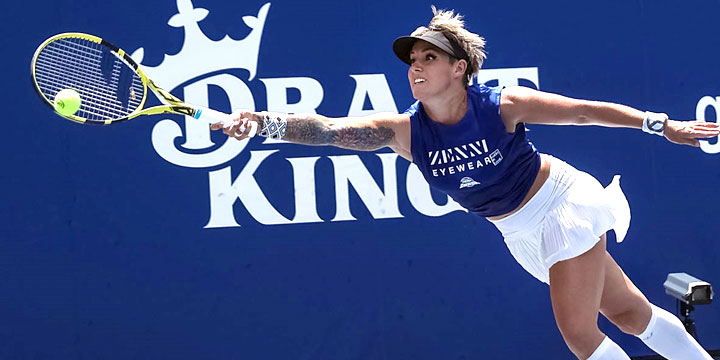 Bouncing back after its first loss, the expansion Chicago Smash surfed past the Orange County Breakers 23-16 Wednesday at Center Court at Creekside at The Greenbrier.

In a match that epitomized “team” tennis, Chicago did not have the lead until late in the third match – mixed doubles – but managed to hang tight early to set up a charge by Sloane Stephens in women’s singles play. In the final match, the Smash closed out the decision in women’s doubles behind Bethanie Mattek-Sands and Eugenie Bouchard.

“The team aspect is great,” Mattek-Sands said. “When you have the other players on the bench cheering you on, in the backcourt – we’re ball kids, cheerleaders, holding umbrellas, towels boys … it’s really a lot of fun. Everyone is competitive here. We haven’t played a match in a while, so everyone came here pretty strong, looking pretty sharp.

“I think the short scoring format is exciting. What makes World TeamTennis special, no matter how much you’re down, the last set – the fifth set – you can come back. I think that adds a little bit of pressure to anyone that in the lead, and it keeps everyone in the game.”

Before the match and after clearing COVID-19 protocols, Orange County added doubles standouts Gaby Dabrowski and Austin Krajicek to the Breakers roster.

To open play, Chicago’s men’s doubles pairing of Brandon Nakashima and Rajeev Ram pulled within 3-2 before dropping a 5-3 decision to OCB’s Luke Bambridge and Steve Johnson.

Johnson and Nakashima went tit-for-tat in men’s singles before a 9-point tiebreaker decided the match. Nakashima went up 2-1 before Johnson rallied for a 3-2 advantage. Nakashima reeled off three of the next four points for a 5-4 win to bring the Smash within 9-8.

Krajicek and Dabrowski made their debut in mixed doubles against the Smash duo of Rajeev Ram and Bethanie Mattek-Sands. Chicago went up 3-1 to take its first lead at 11-10 before Ram nailed the game-winner for a 5-3 decision and a 13-12 advantage for Chicago.

“I’ve had a lot of great doubles partners, played with a decent amount of different styles,” said Mattek-Sands, the Guaranteed Rate Player of the Match. “Doubles is all about communication and figuring out where everyone’s strength is.

“There is something about tennis being a team sport that brings it out of me. Everyone was behind everyone during the points in the matches. Even in our warmups, our practices, we are all vibing.”

Sloane Stephens gave the Smash some breathing room by taking the first two sets against OCB’s Jen Brady. In the final set, with Brady serving at 40-40, Stephens hammered a forehand winner to take the match 5-2 for an 18-14 bulge.

“The girls on Chicago, damn, we’ve got Sloane, Genie [Bouchard] and myself – what a good squad,” Mattek-Sands said. “We’ve all be practicing together, warming up together. We’ve got a group chat going together that’s been amazing. I won’t give too many personal details away, but it’s been amazing.”

Mattek-Sands and Bouchard put the bow on Chicago’s second victory in three matches. The women’s tandem lost the first set then hustled past the Breakers’ Dabrowski-Brady duo 5-2 to complete the 23-16 decision.

“[Genie] can crush it from the back, she’s got a great serve, great return,” Mattek-Sands said of her women’s partner. “Obviously, I love being at-net. When I’m playing with someone that strikes the ball as well as Genie, I’m gonna have her crush it all day back there.”

Chicago is back on the court to face the New York Empire at noon ET Friday on ESPN2. Coached by Luke Jensen, the Empire features Kim Clijsters, who simultaneously held No. 1-rankings in singles and doubles in 2003. Clijsters has six won Grand Slam titles (four in singles and two in doubles) and was inducted into the International Tennis Hall of Fame in 2017.