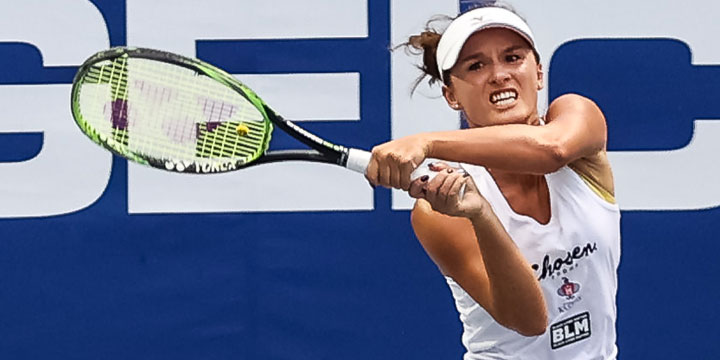 After dropping the first three sets of the evening against the San Diego Aviators in World TeamTennis action at The Greenbrier, the Washington Kastles came together in the second half to win women’s singles and mixed doubles and score a thrilling 21-19 come-from-behind victory.

Following his loss to Sam Querrey of the Vegas Rollers Tuesday, Ryan Harrison of the Aviators got back on track in men’s singles and opened the match with a hard-fought 5-4 win over Tommy Paul of the Kastles.

Harrison and Paul each held serve through the first four games, but Paul broke serve for a 3-2 lead when Harrison sent a cross court backhand long. Paul then held serve for a 4-2 advantage.

Paul had a set point in the next game, but Harrison fought it off with a perfectly placed service winner to hold serve. Paul served for the set at 4-3, however Harrison once again fended off a set point and on the deciding 3-3 point, he blasted an unreturnable forehand to even the set score at 4-4.

In the tiebreak, Harrison gained an early mini-break for a 3-1 lead. Later, with the score at 4-2 in San Diego’s favor, Paul’s cross court forehand landed long to end the set which took 34 minutes.

In women’s doubles, Nicole Melichar and CoCo Vandeweghe won their third straight set for the Aviators as they powered their way past Bernarda Pera and Arina Rodionova of the Kastles 5-3 in 31 minutes.


#WTT2020: @GuaranteedRate Player of the Match @ArinaRodionova sat down with @NickGismondi after propelling the @WashKastles to a comeback win in the final set to talk about the chemistry of the team, her #RefusetoLose mentality, and more! pic.twitter.com/4J8AR9FHoj

At 1-1, Melichar poached at the right time and knocked off a backhand volley winner to break Rodionova for a 2-1 lead. The one service break was all San Diego would need as Vandeweghe easily held serve in the sixth game for a 4-2 lead.

In the next game, Rodionova staved off a break point and held serve to pull the Kastles to 4-3, but Melichar confidently served out the set as she slammed an ace out wide past Rodionova on set point.

The win in women’s doubles gave the Aviators momentum heading into the third set of the evening, but more importantly it extended the Aviators lead over the Kastles to 10-7.

Jonny O’Mara teamed with Harrison to take on Marcelo Arevalo and Nick Monroe of the Kastles in men’s doubles.

Harrison dropped serve in the opening game of the set, but the Aviators came back to break Monroe in the fourth game to knot the score at 2-2. The set remained tied and at 4-4 was decided in a tiebreak.

In a blink of an eye, Harrison fired an ace past Monroe, O’Mara hit a forehand volley winner, followed by a down the line forehand winner. At 3-0, Monroe could not handle Harrison’s backhand service return to give the Aviators a 4-0 lead in the tiebreak. San Diego then won the tiebreak 5-0 as Monroe netted a forehand on the next point.

After winning men’s doubles 5-4, the Aviators held a 15-11 lead over the Kastles.

Christina McHale of the Aviators then faced Pera of the Kastles in women’s singles. Both players stayed on serve through the first seven games, but with McHale serving to stay in the set at 3-4, Pera converted on break point when McHale’s cross court backhand landed long.

With Pera and the Kastles winning women’s singles 5-3, the Aviators lead was cut to 18-16 heading into the final set of the match — mixed doubles.

The Aviators hopes for victory rested on O’Mara and Melichar as they went up against Arevalo and Rodionova of the Kastles.

In the opening game, O’Mara uncharacteristically hit two doubles faults and dropped serve. Arevalo held in the next game and the overall match score was tied at 18-18.

Melichar held in the next game to cut the Kastles lead in the set to 1-2, but Rodionova then held serve for a 3-1- lead as the overall match score was even again at 19-19.

With the Aviators trying desperately to stem the tide, the Kastles had all the momentum on their side as Arevalo blasted a down the line backhand winner to break O’Mara for the second time in the set for a commanding 4-1 advantage in the set.The key service break gave the Kastles their first lead of the match at 20-19.

Arevalo then served out the set at love to complete an impressive 21-19 comeback victory for the Kastles.

“It’s really important for us to have fun. We really support each other and that really helped today. We’re just getting better and better every day,” Rodionova said as the Kastles celebrated their comeback win on the court.

With their victory over San Diego Wednesday evening, the Kastles are alone in first place in the World TeamTennis standings with a 2-0 record. The Aviators are now 1-2.

It would be difficult to find a bigger supporter of World TeamTennis than San Diego Aviators Coach John Lloyd. The 65-year-old native of England, who now lives in West Palm Beach, Florida, has always enjoyed team competitions having represented Great Britain in Davis Cup as a player and a captain. Lloyd, a former Australian Open singles finalist and three-time Grand Slam mixed doubles champion, began his WTT career back in 1987 as Player / Coach with the then Los Angeles Strings.

“If we’re really going to move into the next era of tennis and keep the spectators, we have to make sure our product is for the masses,” Lloyd said. “Having five-set, four or five hour matches is okay for the true lovers of tennis that want to watch a 12-10 in the fifth or a 7-6 in the fifth, but for the majority of fans, 2 ½ hours is their attention span and then they want to do something else.”

Lloyd, who was named 2016 WTT Coach of the Year after leading the Aviators to the title, believes Billie Jean King was way ahead of her time when WTT was founded in the 1970s.

“I’ve always thought that tennis was too long to keep spectators, especially young kids, out there for four or five hours. It’s not logical. In World Team Tennis, it’s 2 ½ hours and its action packed from the first point to the last. You have the men and women combined in doubles, mixed and singles, so you’re getting everything about tennis in 2 ½ hours of explosive action,” said Lloyd, the elder statesman among WTT coaches this season.

“I’ve always liked being a part of WTT, playing or being a coach. It’s always been a fun period of mine throughout the year and I just wish [the season could be longer, because I think when fans see it, they love it. It hasn’t had the exposure it deserves,” he added.

As Lloyd begins his sixth straight year as Coach of the Aviators, there may be times where he experiences an occasional generational gap with his players who are all in their mid-to-late 20s. Perhaps CoCo Vandeweghe said it best when asked prior to the start of the season about playing World TeamTennis with Lloyd at the helm.

“Our coach John [Lloyd] has to keep us all in check and tell us the same stories over and over again and we’ll still keep laughing at them,” Vandeweghe said. “He’s a great tennis mind, so it’ll be fun out there.”

Following a day off on Thursday, the Aviators will meet the Orlando Storm at The Greenbrier on Friday at 4 p.m. (PDT). The match begins of a tough stretch of the season for the Aviators who will play four matches in four consecutive days before their next day off on Tuesday, July 21.

The Storm, the designated Home Team, features a talented squad which includes Americans Danielle Collins, Tennys Sandgren and Jessica Pegula. The 26-year-old Collins reached the Australian Open semifinals in 2019. Sandgren also achieved notable success at the Australian Open, advancing to the quarterfinals in 2018 and 2020. Pegula, who has been ranked as high as No. 55 in the world, is making her WTT debut this season. Rounding out Orlando’s roster is Croatia’s Darija Jurak, along with British stars Ken Skupski and James Ward. Aviators fans will remember Jurak, who played for San Diego from 2015 through 2017, and Ward, a late-season acquisition last year who won three key Men’s Singles matches in the Aviators stretch run to the 2019 WTT Semifinals, including a thrilling 5-3 victory over Sam Querrey of the Vegas Rollers.

The Aviators swept both head-to-head meetings against the Storm last season, winning 25-15 in Florida and 21-18 at the Omni La Costa Resort & Spa in Carlsbad, Calif. Friday’s match will be televised on CBS Sports Network. Fans can also follow results on WTT.com/scores or sandiegoaviators.com.