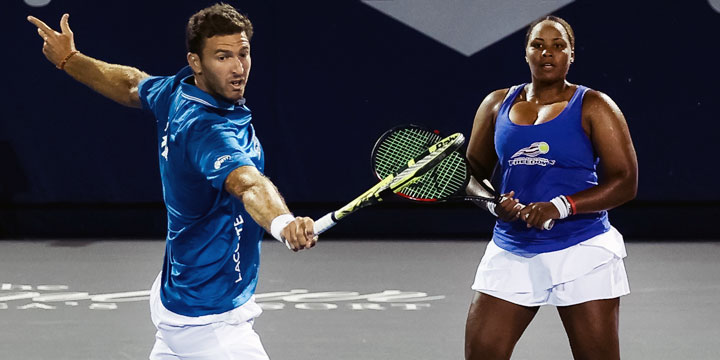 For the second consecutive day, Martin and Townsend did just that in leading Philadelphia to the convincing 24-12 win over the two-time defending champion Springfield Lasers in the final match of the day at The Greenbrier.

With the home coach having the advantage of selecting the line-up, Kardon decided to open the evening with mixed doubles to see if his veteran duo of Martin and Townsend could provide an early spark.

“I have been on the team with Fabrice (Martin) the last three or four years and we have played well together,” said Townsend. “We have created a solid relationship on the court, and we complement each other well.”

Townsend would quickly return to the court with newcomer Caroline Dolehide for women’s doubles and square off against McNally and fellow newcomer Hayley Carter. It appeared as though the rookie combination of Carter and McNally would dig their team out of the early hole taking a 3-1 advantage and slicing the overall lead to 6-3.


#WTT2020: @GuaranteedRate Player of the Match @TaylorTownsend sat down with @OliviaDekker after @PhillyFreedoms 24-12 win over the defending champs. She discussed returning to action with WTT, playing with @fabmartin86 and more. #EveryPointCounts pic.twitter.com/gZwXSU6NUV

Townsend and Dolehide were clearly not finished as they would fight back to level the match at 4-4 and force the first of what would be two tiebreakers. In the breaker, Dolehide, McNally and Townsend would each win one of their two service points and the score with be 3-3 with Springfield’s Carter holding the final three serves.

Philadelphia would break Carter twice to win the breaker 5-3 and the second set 5-4 to take a 10-4 lead heading into the third discipline, which would be men’s doubles.

The Philadelphia victory in women’s doubles would keep Townsend and Dolehide undefeated on the young season.

“Caroline and I never had a chance to play with each other, but we have played against each other,” said Townsend. “I like her aggressive style and I think our games complement each other well.”

It seemed like déjà vu for Springfield as the men’s pair of Linstedt and Jean-Julien Rojer would take a 3-1 lead over Martin and Donald Young thus slicing the overall lead to 11-7. With things looking like Springfield would get back into the match, Philadelphia had other ideas as Young and Martin fought back to even the set at 4-4 and push the overall lead back to 14-8.

Although the Lasers would win the tiebreaker 5-1 and earning the 5-4 win in the set, the Freedoms were able to extend the overall lead to 14-9 with men’s and women’s single on the horizon.

“It’s obviously big in the sense that every game counts in World TeamTennis,” said Springfield coach Jean Laffnie DeJager. “It puts pressure on you after dropping the opening mixed doubles set 5-0. Philadelphia is a talented team, but I told our group after the match that tonight was not a true reflection of the final score and that it’s a long season.”

Philadelphia coach Craig Kardon added, “I always emphasize the importance that each set and each match is not over until it’s over. You have keep winning every game and every point because it could come down to a tiebreaker in the end, so I think it’s great we were able to win like this tonight.”

Sofia Kenin was up first and while McNally tried everything, she could to keep the No. 4 singles player in the world off balance, Kenin proved to be too much earning the 5-1 win. Taylor Fritz would follow with a 5-2 win of his own to give his team the victory.

“I was really happy for the team tonight and it was great to see Donald play since we both missed the first match in quarantine waiting for our test results,” said Kardon. “I thought Taylor (Townsend) and Caroline played great in the women’s doubles and Taylor Fritz was great in singles.”

The Freedoms (2-0 ) return to the court tomorrow afternoon at 3 PM EST to face the New York Empire (0-1). The match will be televised on FaceBook watch or CBS Sports Digital.