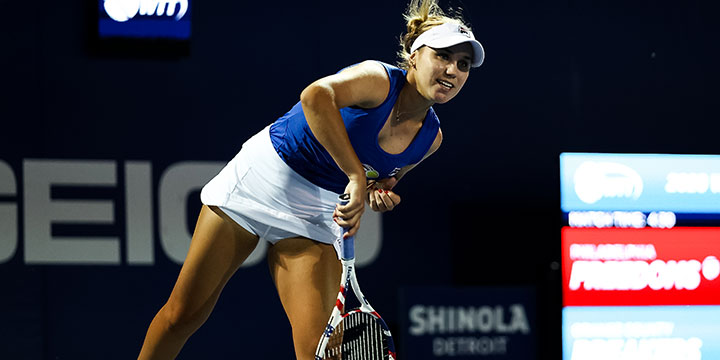 After two consecutive years of regular-season first-place finishes, the Philadelphia Freedoms kicked off their 2020 World TeamTennis season right where they left off, winning all five sets for a 25-16 win against the Orange County Breakers at The Greenbrier.

The experienced WTT duo of Fabrice Martin and Taylor Townsend started the evening’s affair with a dominant serving performance for the Freedoms. The 2016 WTT Male Rookie of the Year and 2017 WTT Female MVP won 16 of 18 service points for the 5-3 win against Andreja Klepac and Luke Bambridge.

2020 Australian Open singles champion Sofia Kenin then got off to a hot start in her league debut, quickly building a 4-0 lead over Jennifer Brady. The former UCLA All-American chipped away at the lead however and fought back to go up 0-30 while Kenin was serving for the set at 4-3.

Martin, the acting coach for this match while Craig Kardon awaits the results of his COVID-19 test as part of the league’s protocols, wisely took a GEICO timeout which helped the 21-year-old calm her nerves a bit to close out the set.

“I’m just super happy I started off really well. I felt like I played well overall and she of course picked up her game, but I was able to close it out,” Kenin said. “Billie Jean King reached out to me and asked me to play for her team, so I was super excited and honored.”

Men’s doubles, the lone set of the evening to not feature any breaks of serve, was decided in a tiebreaker as Taylor Fritz and Martin saved three set points from 2-4 down. Serving on the final three points to close out the breaker, world No. 24 Fritz helped his team earn the tight 5-4(4) win over Bambridge and Steve Johnson to give Philadelphia a 15-10 lead heading into halftime.

A second 21-year-old American made her league debut Monday, as 2020 Australian Open doubles quarterfinalist Caroline Dolehide joined forces with Townsend and the duo converted all three of their break point chances to beat Klepac and Brady 5-3 in the fourth set of the match.

After losing 6-2 5-7 8-10 to Johnson just nine days ago at the DraftKings All-American Team Cup in Atlanta, Fritz exacted his revenge with a 5-3 win to put an exclamation point on Philadelphia’s first match of the season.

Philadelphia created a plethora of break point of opportunities by having early leads in return games, as they converted 7 of 20 chances including their final four across the last two sets.

The Freedoms are back in action Tuesday night when they take on the Springfield Lasers, the two-time defending league champions. They’ll square off at 7 p.m. Eastern live on ESPN 2. Meanwhile, the Breakers have a day off before returning to action Wednesday morning to face expansion franchise Chicago Smash at 11 a.m. ET live on ESPN+.