Danielle Collins Leads Orlando to a 21-16 Win Against Chicago 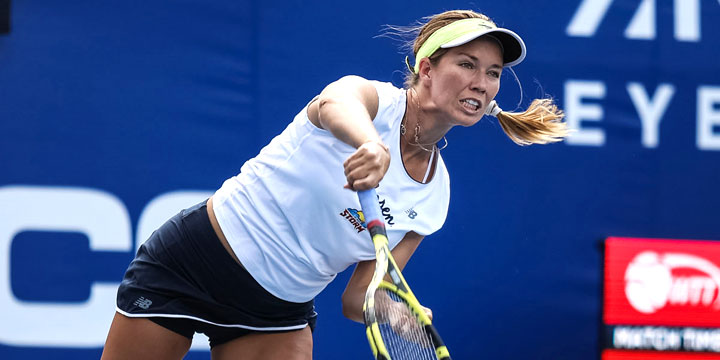 After experiencing the euphoria of winning its inaugural match on Sunday, Chicago had the pendulum swing the other way on Tuesday. The expansion Smash dropped four of five sets in nip-tuck 21-16 loss to Orlando at The Greenbrier.

In the deciding match, Chicago’s men’s double tandem of 18-year-old Brandon Nakashima and Rajeev Ram went up 1-0 to pull within 16-13 before Tennys Sandgren and Ken Skupski pushed the Storm advantage to 17-13. Chicago battled to within 18-15.

Orlando (2-1) took control at 19-15 after a series of volleys between Nakashima and Sandgren as Skupski pounced to drop in a return. Still, the Smash answered to pull within 19-16 and held hopes of extended play.

However, the Storm responded to go up 20-16 and finished the match with Skupski’s ace for the 21-16 victory.

The women’s doubles matchup saw Chicago’s Bethanie Mattek-Sands and Eugenie Bouchard steamroll to a 5-1 win against Darija Jurak and Jessica Pegula to draw the Smash within 16-12.

“[Sloane] is a U.S. Open champion, we’ve known each other for a long time, and grown up playing together,” Collins said. “I was familiar with her game. Luckily, I played well and was able to contribute to the team today.

“It’s a unique setting here with World TeamTennis and playing on a team, so that’s making it really fun.”

In men’s singles, Nakashima – a former ACC Player of the Year from the University of Virginia and the 220th-ranked player on the ATP tour – dropped a 5-4 decision to Orlando’s Sandgren, the ATP’s 55th-ranked player.

In mixed doubles, Orlando’s Skupski and Pegula nipped Ram and Mattek-Sands, 5-3. For Tuesday’s match, Storm coach Jay Gooding swapped in Skupski for Sandgren, which resulted in a 15-7 lead for Orlando.

The 80th-ranked player in the WTA, Pegula contributed several clutch returns throughout the seesaw match and sealed the final set on her serve after falling behind 0-30.

The Smash (1-1) returns to the court at 11 a.m. ET Wednesday against the Orange County Breakers. The match will be carried live on ESPN+.