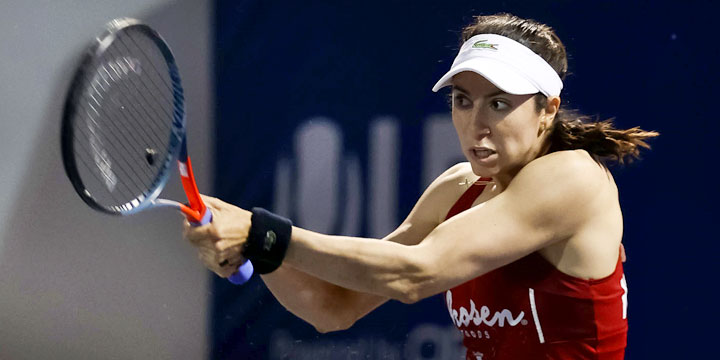 If the first match of their 2020 World TeamTennis season is any indication, the San Diego Aviators will be an exciting team to watch as they contend for a spot in the WTT postseason.

On a warm Sunday evening at The Greenbrier, the Aviators captured four of the five sets in impressive fashion as they overcame their Southern California rival, the Orange County Breakers 23-16.

With each player dominating their service games, the set was deadlocked at 4-4. Harrison took a 3-1 lead in the tiebreak with an early mini-break. After hitting an ace for a 4-1 advantage, Harrison clinched the set for San Diego on the following point when Johnson sailed a crosscourt backhand long.

In the second set of the evening, CoCo Vandeweghe and Nicole Melichar of the Aviators scored the first service break of the match in women’s doubles against the Breakers’ Jennifer Brady and Andreja Klepac.

Serving at 3-3 in the set, Klepac fended off two break points but on the third break point, Melichar showed her quick hands at the net and knocked off a backhand crosscourt volley winner for the service break and a 4-3 lead. In the next game, Melichar dug deep and fought off two break points and hit a service winner against Klepac to win the set 5-3 and extend the Aviators lead over the Breakers to 10-7.

Orange County cut the Aviators lead to 13-12 as Johnson and Luke Bambridge capitalized on an early service break in Men’s Doubles and went on to defeat Harrison and Jonny O’Mara of the Aviators 5-3.

With the momentum shifting in the Breakers favor after their win in men’s doubles, Christina McHale came through in the clutch for the Aviators as she put on a thrilling performance in a 5-4 victory over Brady in women’s singles.

After converting a break point in the seventh game to take a 4-3, McHale served for the set. However, Brady executed a brilliant down the line slice backhand to win a deciding 3-3 point and send the set to a tiebreak.

Brady took an early 3-1 lead in the tiebreaker, but let the advantage slip away as McHale staged a spirited rally to win the tiebreak and the set to give the Aviators an 18-16 lead.

The Aviators saved their best for last in mixed doubles as doubles specialists O’Mara and Melichar took a 2-0 lead over Klepac and Bambridge. Orange County substituted Johnson for Bambridge at the start of the third game, but with O’Mara’s excellent service returns and Melichar’s outstanding net play, the Aviators continued to dominate and increased their lead to 4-0.

Harrison replaced O’Mara in the fifth game and proceeded to serve out the set to seal the season-opening win for the Aviators.

During this unprecedented season for World TeamTennis, fans may wonder why there is a designated Home and Visiting team for each match played on the neutral tennis venue at The Greenbrier. The most obvious reason can be found in Section 5 of the 2020 WTT Rules Guide under Match and Order of Play, which states — The order of play/sets shall be determined by the coach of the home team. According to Aviators Coach John Lloyd, the order of sets played can make the difference between winning and losing.

“The home coach can put the sets in any order that he or she wants and that can be crucial. Do you start off with what you think are your strengths or do you end with your strengths? Do you pad the middle?” Lloyd said before the start of the season. “With the format, first to five with No-Ad scoring, you’ve got to come out of the starting gate fast. Every point is gold. You can’t play yourself into a match. It’s a sprint. We’ll have to find out what our strengths are and what our best format is.”

After an off-day on Monday, the Aviators return to WTT action on Tuesday against the Vegas Rollers at 8 a.m. (PDT). Vegas dropped their season opener on Sunday, falling to the expansion Chicago Smash 24-18. The Rollers, the designated home team, feature a tough roster which includes 2016 Olympic gold medalist Monica Puig, 2017 Wimbledon semifinalist Sam Querrey and Mike and Bob Bryan, tennis’ all-time winningest doubles team. The match will mark the first of two head-to-head meetings between the Aviators and Rollers this season. Last season, San Diego and Vegas split their two matches. The Rollers spoiled the Aviators home opener in Carlsbad, Calif., with a 23-15 victory over San Diego. Later in the season, the Aviators turned the tables, defeating the Rollers 23-18 in Las Vegas.

Tuesday’s match will be televised on ESPN2. Fans can also follow results on WTT.com/scores or sandiegoaviators.com.