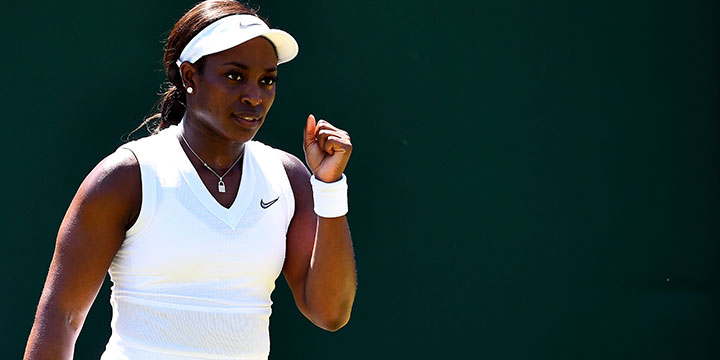 World TeamTennis is back in Chicago, and 2017 U.S. Open champion Sloane Stephens is leading the way. One of the original eight WTT franchises in 1973, Chicago returns as the league’s third expansion team during the past two years, in addition to Orlando and Vegas.

The Smash opens the season at 4 p.m. ET Sunday against the Vegas Rollers on CBS Sports Network. Because of the COVID-19 pandemic, the 2020 season will be played at The Greenbrier resort in White Sulphur Springs, West Virginia.

:: 2020 Chicago Smash Schedule ::
“If you look at the lineups of all the teams,” Stephens said, “they are stacked, which is amazing. There is going to be a lot of good competition. It is really fast play, so it will be really interesting to see how people play after not playing for a while.”

WTT CEO Carlos Silva said despite concerns with the coronavirus, the organization has been steadfast in playing the 2020 season. “I think everyone has known over the last two or three months that we never really knew where things were going, in terms of stay-home orders and COVID going up and down.

“We knew that we were not going to be able to go to our cities, with our ninth city being the Chicago Smash, anchored by Sloane and her coach, Kamau Murray, which is unfortunate. We worked extremely hard to find the right place to bring all nine of our teams to a safe environment so that we could have our season.”

Stephens began ramping up conditioning during the past several weeks in preparation for the season opener. She balanced practice and matches in Florida and South Carolina to “kind of feel the level of where I was.

“I’ve had two weeks to adjust and work on the things I need to work on, which has been good, [and] lose a few pounds, which was definitely needed.”

Meanwhile, teammate Rajeev Ram has been on the left coast, ratcheting up his game for this unique season.

“Obviously, everything that people are going through right now with the COVID, having a tennis season condensed into one month at one spot and everybody there and doing their thing, how do you prepare for that mentally?” he asked.

“It’s different than anything that we’ve done before. To play that many matches in a competitive environment in one place, it’s not something we’ve ever done. I don’t know how to prepare for it, but I’m excited to get back on the court and compete.”

Silva noted the on-court challenges of a compact season would be an intriguing subplot as teams try to solve the puzzle for a championship run.

“Everyone is going to be great in the first two matches like everyone always is when you’re fresh,” he said. “In the third and fourth and fifth match, the elbow is going to hurt a little bit, the hip is going get a little tense, you are going have a hammy, and it’s going to be interesting to see how the players are going to work as a team and the coaches to push through during those 14 regular-season matches to be one of the of top four teams that make the playoffs.”

While laying out the protective measures being implemented at The Greenbrier, Silva said, “We’re trying to be smart, practical in a simple way, and we’ll be going through this with all of the players when they arrive as well.”

• All players will wear masks on the bench. (The only players without a mask will be on the court.)
• No ball kids on the court.
• Only 500 fans in the stands.
• All fans are required to wear masks.
• Every other row will be blocked.
• The ushers will socially distance fans.

“I feel like I can protect myself the best I can,” said Stephens, who is entering her sixth season with WTT. “I’m definitely in control of that, and I can protect others by following the protocols and the guidelines and make sure that I’m following all the rules, so I don’t harm anyone else or myself.

“Nobody wants anybody to get sick or be in trouble or be in danger. Just being responsible and making sure that you’re actively doing what you can for yourself and to protect others is the most important thing.”

With every player on-site for the entire season, Silva said the stakes are higher, literally.

“All of these names are playing the full season,” he said. “It’s going to change the dynamic yet again. There is $1 million of prize money for the postseason. This isn’t just getting paid during the regular season and trying to raise the trophy. This is getting paid in the regular season and then trying to win another $500,000 and raise the trophy. That also changes the dynamic.”

The uniqueness of WTT is a welcomed change of pace for Ram, who is playing in his second season. “We don’t get this opportunity very much. As tennis players, we play as individuals 99% of the time,” he said. “Whether it’s Davis Cup or Olympic team or World TeamTennis, there’s only a handful of times when we’re playing on a team. So, it’s fun for us.”